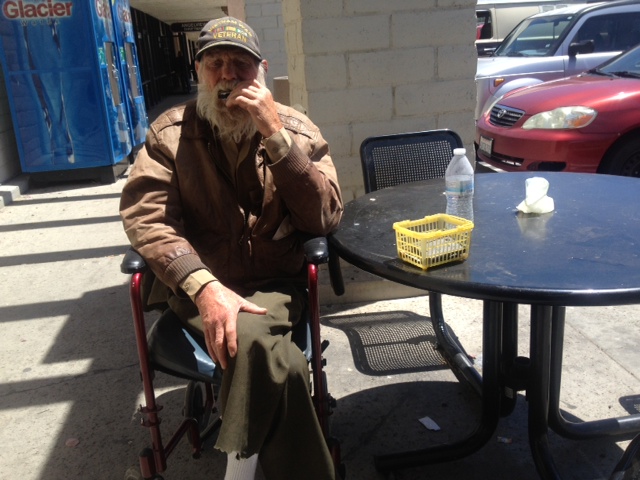 Marine veteran George Flynn, 74, sits in his wheelchair in front of a Mojave desert grocery store, playing his harmonica for spare change.

Despite his many health woes – including an infected leg and cancer he says was caused by Agent Orange in Vietnam – Flynn takes the bus here most mornings to play for eight hours in hopes of making $15 or $20 a day which he uses to pay for his spot in a remote campground where he can wash his clothes and shower.

Although Flynn barely scrapes by – somewhere along the way he stopped getting his monthly government assistance – his struggles are surprisingly common.

Providing assistance to these veterans is often daunting, since they are typically saddled with a variety of physical and emotional problems; half suffer from mental illness that includes Post Traumatic Stress Disorder and depression. Compounding these difficulties are substance abuse, unemployment and poverty.

As part of its five-year plan, the Department of Veteran’s Affairs has vowed to end veteran homelessness by 2015, creating a robust online resource directory that includes a 24-hour hotline.

Around the state, programs targeting homeless veterans often use veterans themselves for outreach efforts that have spawned a mixture of hope and despair.

Fish has spent the past three years seeking out veterans like Flynn in the desert’s Morongo Basin, which borders Joshua Tree National Park and includes the Marine Corps Air Ground Combat Center in the city of Twentynine Palms. He says the region is rife with homeless encampments low on amenities and high on government distrust.

Fish has contacted about 300 of an estimated 1,300 homeless vets in the basin.

“The majority of them live in bunkers they dug out years ago in the desert,” says Fish, citing one that has existed for 31 years. “They’ll find a nice inconspicuous spot. They’ll put a bed in it, a chair in it. Almost like a barracks.”

Yet at the same time, there is growing proof around California that homeless veterans of all ages are being found and taken care of.

While the total number of homeless has increased in recent years, veteran homelessness has actually dropped – by 21% according to counts between 2011 and 2013.

“Wherever you see the resources go, you slowly but surely see the problem getting solved,” says Gregory Scott, president and CEO of New Directions for Veterans, which services Los Angeles County.

“The new model for getting people off the street is a ‘housing first’ model,” says Deborah Johnson, president of the California Veterans Assistance Foundation, which focuses its efforts on Kern County. “The goal is to get them housed first and then work on the other issues.”

Yet homelessness is just one part of an even larger problem, she adds, citing the 1.4 million veterans living below the poverty line nationwide.

Los Angeles County has the largest number of homeless veterans in the country with 6,100, many of them on L.A.’s notorious Skid Row.

Last fall, Scott’s New Directions and the VA saw years of collaborative effort come to fruition with the opening of their $48 million, 147-unit Sepulveda I and II housing projects. Located in the San Fernando Valley’s North Hills neighborhood, about half of its formerly homeless occupants are 55 and over.

Critical to the site’s success are wraparound services that include case management and links to social services, job support, and mental health counseling.

“What we’re doing at Sepulveda is a really good model for helping other veterans,” says Scott.

Barker’s life fell apart when his girlfriend of 14 years died suddenly in 2005, and he spent the next decade drifting from shelter to SRO hotels that were full of cockroaches and drug dealers.

Today, Barker has a pristine new apartment in one of the Sepulveda buildings.

“I have a lock and a door and a garbage disposal and a doorbell,” he gloats. “I even have all the appliance booklets in the drawer.”

Barker praises New Directions and the VA for their fortitude in building the site despite neighborhood opposition.

“A lot of people didn’t want us old veterans to live on their sacred ground,” he jokes.

In March, New Directions also opened a 40-unit site east of downtown Los Angeles in El Monte. Another 32-unit facility for veterans 55 and over is scheduled to open in Boyle Heights this October. A Glendale facility is slated to open the middle of next year.

Also next year in West Adams, New Directions will begin construction of 64 units, with nearly half of them reserved for homeless veterans 62 and over.

While more resources are being given to homeless veterans, Scott says the problem needs sustained attention that covers housing, employment and health services.

“For a long time, people have ignored the issue,” he says. “We’re just wrapping up two wars, and these guys are coming back. And even though there’s a lot more attention being paid… we’re still unprepared for the influx of veterans now coming back.”