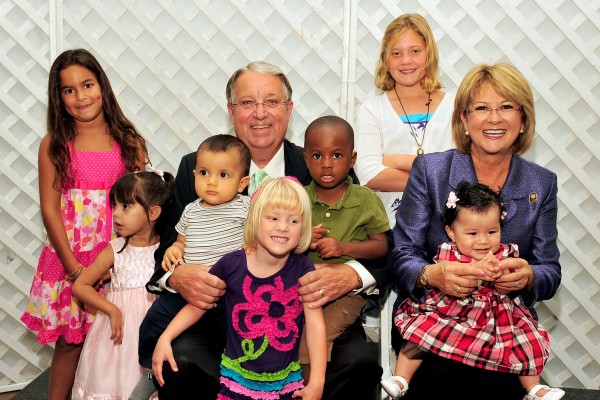 Debi Faris still remembers the incredible sadness she felt after hearing a news report about a dead baby boy who was found in a duffel bag on the side of the Harbor Freeway in San Pedro. It was the spring of 1996, and the Yucaipa mother of three was haunted by the story of the infant who had been tossed from a speeding car.

“This little boy was a gift that his parents decided to throw away like a piece of trash,” Faris says. “I wondered who would name him and ensure he received a proper burial.”

Faris called the coroner’s office and was told that the baby’s remains would be cremated if no one claimed the body within 30 days. She asked to be notified in the event no one came forward. By the time Faris received a call back from the coroner’s office, authorities told her two additional deceased babies had been found–a boy in a trash bin at Main and 25th streets in Los Angeles and a girl that washed up on a private beach in Malibu.

Faris buried the three infants at Desert Lawn Cemetery in Calimesa in the summer of 1996. She also purchased room for 40 graves using $27,000, from her family’s personal savings and formed the non-profit Garden of Angels to provide names, and legal and honorable burials for abandoned newborns. Yet Faris also knew she needed to do something to prevent future infant deaths due to abandonment.

“I realized that some parents of newborns find themselves in difficult circumstances and can’t raise a child,” Faris says. “I contacted California State Senator Jim Brulte and asked if he could write legislation that would decriminalize ‘safe’ abandonment.”

The Safe Surrender for Newborns law was passed in January, 2001, allowing parents and legal guardians to leave a baby up to three days old at designated spots such as firehouses or hospitals, without fear of prosecution. While there are now Safe Surrender laws in all 50 states, Faris doesn’t believe her work is finished. Although 560 newborns were safely surrendered in California between January 1, 2001 and September 30, 2013, not all tragedies have been averted.

“Last October, a deceased infant was found at a Los Angeles recycling plant and in April, a newborn was found in a dumpster in Corona,” says Los Angeles County Supervisor Don Knabe, who works closely with Faris on the Safe Surrender program. “Cases like these show us that we still have more work to do.”

According to the Centers for Disease Control and Prevention (CDC), the risk of homicide on the first day of a child’s life is 10 times greater than at any other point in their life.

“A desperate or confused mother may abandon her baby in a panic, not thinking the baby will die, and then regret that act for the rest of her life,” Faris says. “We commend the biological mothers who are brave enough to safely surrender their infants.”

Faris continues to travel the state speaking for free at schools, and other community groups. In addition, Knabe and other Los Angeles County officials have recently launched a new Safe Surrender public awareness campaign in multiple languages, and they continue to collaborate with community-based organizations to help desperate mothers realize there’s a better choice. The new campaign includes billboards, posters, bumper stickers and a redesigned website.

“Our hope is to let expectant mothers realize that no matter what their situation is, the Safe Surrender program offers a safe, secure and anonymous way to get a child into safe hands—no shame, no blame,” Knabe says. “A unique aspect of our new outreach campaign is that we’re reaching out to influential members of the community—promotoras, church leaders, and local health providers—to help spread the word.”

Michelle D’s* 12-year-old daughter, Mady, is living proof that Safe Surrender works. In 2001, shortly after the law went into effect, Mady’s biological mother surrendered the baby girl to a fireman in Rancho Cucamonga.

“My husband and I had been trying for years to have a child and were able to adopt Mady through the Los Angeles County Department of Children and Family Services,” says Michelle, who is now an advocate for the Safe Surrender law and works with Faris as a member of the Garden of Angels’ board of directors. “Mady is now a happy and healthy preteen who has become friends with some of the other Safe Surrender kids and also with the firefighter who aided in her surrender.”

Faris’ vision for her non-profit is now expanding to include a support group for Safe Surrender families such as Michelle and Mady and to also provide scholarships to Safe Surrender children when they reach college age.

“Many children including Mady are alive today because of the Safe Surrender law,” Faris says. “The law saves lives, but only if people know it exists, which is why we are so passionate about continuing to spread the message.”