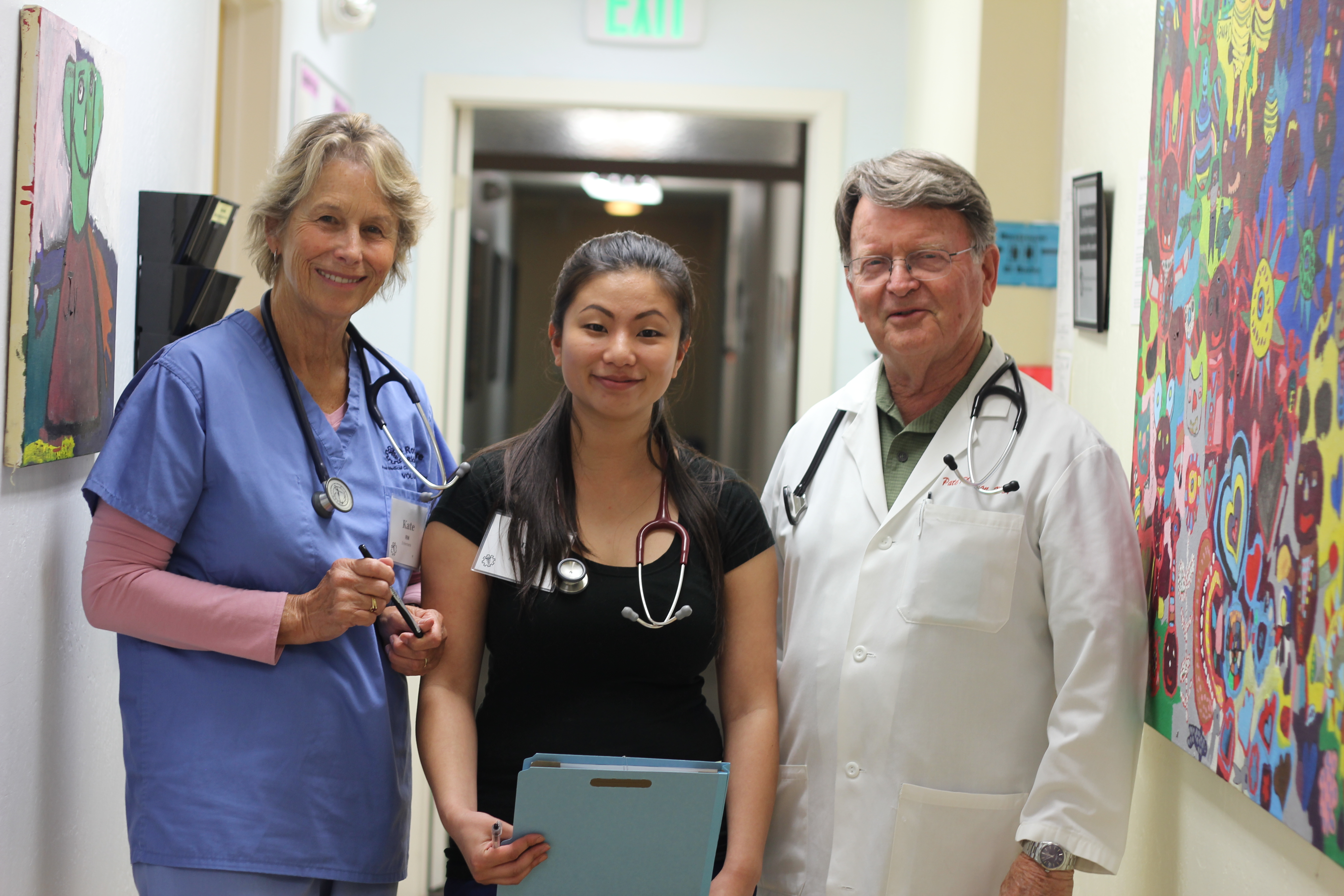 On a recent Tuesday evening in Richmond, Marta waited to see a doctor. In recent months, she had developed a rash that covered her body, and her entire face had been swollen.

Marta was seeing a doctor at a free clinic for the uninsured that is open just once a week. Unlike most health-care facilities, this clinic is staffed by volunteer doctors, nurses, receptionists, and medical interpreters. Volunteers believe many of those seeking care at RotaCare Richmond Free Medical Clinic at Brighter Beginnings, one of a dozen volunteer-run clinics founded by Rotarians in the Bay Area, are undocumented like Marta, although they do not ask patients about their immigration status.

“Most of the patients we see are working, and most of them are in low-paying jobs,” said Dr. Pate Thomson, a medical director at the clinic and a retired cardiologist.

Despite the implementation of the Affordable Care Act and the expansion of Medi-Cal in California this year, about three million state residents remain uninsured. Of those, about one million are undocumented and thus are not eligible to enroll under the federal health law. Prior to this year’s rollout of the Affordable Care Act, undocumented residents made up 20 percent of the uninsured population in the state. They now represent about 30 percent of the remaining uninsured, according to a report by Health Access, a consumer-oriented advocacy group.

But that could change later this year. The state legislature is currently considering Senate Bill 1005, dubbed the “Health for All” act. Authored by Senator Ricardo Lara, D-Long Beach, the bill would allow undocumented people to sign up for the ACA and Medi-Cal through Covered California, the state’s health insurance exchange.

“I know from my own personal experience and other immigrant families that we knew that there are many difficult struggles that immigrants face as it is, and basic health needs should not be one of them,” said state Assemblymember Rob Bonta, a co-author of the bill whose district includes Oakland, Alameda, and San Leandro. Assemblymember Nancy Skinner, whose district includes Berkeley, North Oakland, and Richmond, is also a co-author.

An estimated 2.6 million undocumented people — meaning those who came here illegally or who came here legally but then lost their legal status — live in California. About 124,000 reside in Alameda County and 79,000 in Contra Costa County, according to estimates by the Public Policy Institute of California. Undocumented people make up about 10 percent of the state’s workforce.

Undocumented Californians also paid about $2.7 billion in taxes, including property, sales, and income taxes, in 2010, according to the most recent annual estimate available from the Institute on Taxation and Economic Policy.

Currently, 29 percent of undocumented adults nationwide receive health insurance through their job or have private insurance, according to the Migration Policy Institute. But the others may never see a regular physician. They use home remedies when they’re sick or injured, or they end up in the emergency room when their health deteriorates significantly. Some seek help from places like RotaCare or other safety net providers in the area, including clinics such as La Clínica de La Raza and Asian Health Services in Oakland.

SB 1005’s proponents, who include traditional health advocates and immigrant rights activists, say the legislation will decrease the amount the state will have to pay for emergency treatment of undocumented residents. It’s unclear, however, exactly how much the state would save. A recent study by the UCLA Center for Health Policy Research found that undocumented Californians currently show up at the ER at about half the rate of US-born residents. But undocumented people may be avoiding the ER because of their fear of being deported.

SB 1005 also promises to help undocumented people who end up with lifelong health problems because they don’t seek medical treatment. When Akiko Aspillaga was sixteen years old, she hurt her knee badly during a soccer game. Afraid of how much it would cost to go to the ER or see a doctor, she and her family decided not to seek professional treatment. Without health insurance, Aspillaga, who immigrated to California when she was ten from the Philippines, used a home treatment, alternating hot and cold packs.

“My friend said my knee popped out and popped back in,” said Aspillaga, now 24. “All I know is that I couldn’t walk for a few hours.”

Today, Aspillaga can’t do any strenuous exercise without feeling pain in her knee. She recently graduated from nursing school, a career path she chose in part because she wanted to make sure she could help her mother in case there was a medical emergency.

Aspillaga is currently a community organizer at Asian Students Promoting Immigrant Rights through Education (ASPIRE), a network of Asian and Pacific Islander undocumented young adults, many of whom have received DACA (Deferred Action for Childhood Arrivals) — an immigration status that allows them to work — in the past two years. Students who have received DACA are also eligible for Medi-Cal if they qualify by income but are specifically excluded from purchasing insurance through state exchanges under the Affordable Care Act.

Another current option for those without legal status is county-based health coverage. Alameda County is among 8 of 58 counties in the state that provides some coverage for low-income residents who are undocumented. San Francisco, Santa Clara, San Mateo, and Los Angeles counties also have programs, but Contra Costa County does not.

Today, there are about 45,000 people in Alameda County enrolled in HealthPAC, a program that serves low-income people in the county who aren’t eligible for any other coverage. That means the majority of those now in the program are undocumented. About 40,000 state residents who were previously enrolled in HealthPAC (and are eligible for health-care coverage under Obamacare because they are not undocumented residents) transitioned to Medi-Cal in January.

HealthPAC enrollees usually sign up at a community health clinic, and then receive a card. They choose a clinic within the county’s network and can also access services at the Alameda Health System, which includes Highland Hospital. However, to qualify for the program, enrollees must make less than 200 percent of the federal poverty level, and they pay nominal co-pays for prescriptions and appointments if their income is between 138 and 200 percent of the poverty level. An estimated 50,000 undocumented Alameda County residents fall in that category, according to county officials.

But it’s not the same as having insurance. If a person in the program gets in an accident outside of Alameda County and uses health services there, they would not be covered. Nonetheless, the program provides some level of health care that people would otherwise not receive.

The state legislature is also considering several other bills that would affect immigrants. Most recently, the state Senate passed SB 1159, which would allow undocumented people to get licenses in the health-care industry and other jobs.

Proponents of SB 1005 are heartened by the fact that public opinion about undocumented people has changed dramatically in the state in recent years. A 2013 survey by the Public Policy Institute of California showed that 76 percent of Californians believe that “illegal immigrants who have lived and worked in the United States for at least two years should be given a chance to keep their jobs and eventually apply for legal status.”

Jirayut Latthivongskorn, who emigrated from Thailand as a child and will be entering UCSF this fall as the school’s first undocumented medical student, is advocating for the new legislation, including the Health for All act. He is also a co-founder of Pre-Health Dreamers, a group of young undocumented students.

“We’ve had so much support,” Latthivongskorn said. “This is something people care about. They have friends and family members who are undocumented and directly affected. It affects everyone who lives in the state.”

This article was produced as a project for The 2014 California Health Journalism Fellowship, a program of USC’s Annenberg School of Journalism that receives funding from The California Endowment. It was funded by a grant from calhealthreport.org.