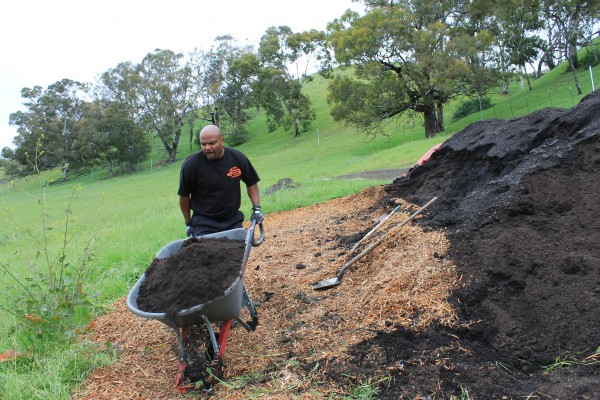 Anthony Forrest has lived almost half of his 52 years behind bars.

He’s been in and out of prison for much of his life, spending a total of 25 years incarcerated, he said.

Less than two months before he left San Quentin State Prison for the last time, Forrest said, he knelt down and prayed for help turning his life around. He walked out of the room and saw a flier for Planting Justice, offering paroled felons from Alameda and Contra Costa counties jobs planting gardens around the East Bay and greater Bay Area after they got out.

“I didn’t want to leave San Quentin the same way I went in,” Forrest said. “I wanted to change everything.”

Forrest was released on a Wednesday. The next day he got married, and the following Monday he reported for work with Planting Justice. That was in 2011. He’s been with the group ever since, growing vegetables, giving talks, and raising money for the nonprofit outside Farmer Joe’s grocery store in Oakland’s Dimond District.

“This is a new beginning here,” said Forrest, whose most recent stint in San Quentin involved six years on charges of assault with a deadly weapon (“technically it was a drug deal gone bad,” he said).

Since joining Planting Justice, Forrest has started a community garden at his church, taught at a local high school and now is earning his degree in permaculture at Merritt College in Oakland, where he lives.

Forrest’s old friends, he said, “they’re in a position to go to prison forever. I only see myself going up the ladder.”

Planting Justice celebrated its fifth anniversary this April. The brainchild of Gavin Raders and Haleh Zandi, the organization has provided 13 San Quentin parolees with jobs after they left prison. Only two have returned there, Raders said. Six remain on the 22-member staff.

The program was a natural progression for the two longtime community organizers, who previously worked largely on political campaigns, said Raders, 31. He and Zandi volunteered at the Inside Garden Program at San Quentin, which teaches inmates how to grow their own food. There, they often heard students complain that while the program was good, they weren’t sure how to integrate their new skills after leaving prison.

Planting Justice was born to try and rectify that, said Raders, who grew up near downtown Los Angeles.

Since then, parolees with Planting Justice have helped build 250 edible gardens around the Bay Area, many at private homes. The program is expanding to build gardens at schools, affordable housing complexes, prisons and juvenile detention facilities, Raders said.

Planting Justice aims to be financially sustainable, Raders said, and earns between 60 and 75 percent of its approximately $1 million operating budget through its programs and canvassing.

For example, Raders said, the regular price Planting Justice charges to build a garden for one home also covers the cost for crews to build three gardens for low-income families. The program also relies on a large team of donors who give a small amount — around $5 or so — each month.

The budget’s remaining 25 to 40 percent comes through grants and foundation contributions, Raders said.

Looking ahead, the group is starting a 10-acre farm this fall in El Sobrante, and hopes to start selling their produce and employ more parolees. Organizers also are examining new ways of doing urban agriculture: for example, grow leafy greens and fish in aquaponic farms housed on abandoned city lots.

Philip Kader, chief probation officer for Contra Costa County, deals with a number of San Quentin parolees as they readjust to life back home. Kader said he welcomes Planting Justice and programs like it.

“There clearly are opportunities to help these returning populations have better success,” Kader said. “We never know what elements of intervention are going to be the most successful. It’s a matter of timing, respectfulness and how programs are presented to people.”

Wiley Rogers, 28, has been with Planting Justice since the beginning. The head of media strategy, his passion for permaculture got him interested in the program. Now the things that keep him here stretch far beyond that.

“I don’t’ feel like we’re just out here being permaculturalists,” Rogers said. “That doesn’t appeal to me anymore.”

Instead, said the Berkeley Hills native, he is more interested in growing jobs and a healthy community for Bay Area residents who often struggle to find both.

“We’re really working with populations that have been left out of the environmental movement and the food movement, and we’re in the Bay Area, which is a hub for both,” Wiley said.

That juxtaposition is one Forrest likes to point out as he canvasses for money outside Farmer Joe’s, which specializes in local, organic and specialty foods.

“I know you’re tired of violence and you like vegetables,” Forrest says, approaching shoppers as they come and go.