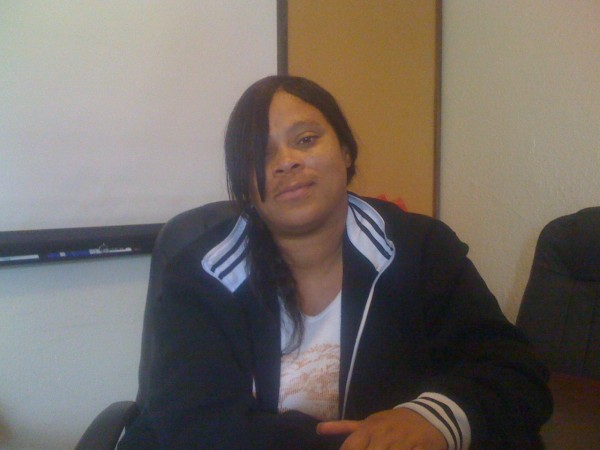 Rochelle Gibson arrived on Skid Row in bad shape. She’d twisted her ankle on a curb  and lost a front tooth in a fight. Alone and fresh from jail, Gibson had no identification or place to sleep.

The Anne Douglas Center for Women told Gibson she could stay if she got a physical, and then led her across the street to the LA Christian Health Centers clinic. That was five months ago.

“I needed four fillings,” Gibson said, opening wide and pointing to her teeth. Two have been filled, and the others should be fixed by Christmas. “Then I’ll be able to smile again.”

Gibson doesn’t have dependent children and doesn’t qualify for Medi-Cal. The Christian clinic paid for her new ID, braced her ankle and set up appointments with the onsite dentist and therapist for counseling sessions – all without charge.

But soon, Gibson and the clinic will catch a break, when the Affordable Care Act extends Medi-Cal coverage to childless women, in January. More than 1.4 million California residents will be newly eligible for Medi-Cal under the ACA, including up to 55,000, or 53 percent, of chronically homeless people.

Homeless women present additional challenges to shelters and clinics: many are victims of sexual assault, need preventative treatments like mammograms, and require childcare in order to get to doctors’ appointments. So for the ACA to really work, housing providers, clinics and policymakers will have to work together to coordinate care.

Around Los Angeles, clinics have ramped up efforts to get homeless women insured through Medi-Cal or Healthy Way LA, a free program for LA county residents. Healthy Way LA enrollees will automatically be enrolled into Medi-Cal in January, thanks to Obamacare.

But in 2015, even homeless patients will have to provide proof of residency to reenroll, said LA Christian Health Center administrative director Bettina Lewis.

“It’s exciting but scary at the same time,” said Lewis. “How do they prove residency when they have nothing?”

How the homeless will prove residency remains an open question, even as clinics are training employees to enroll existing and new homeless patients in Healthy Way LA and Medi-Cal for 2014.

Leticia Ponzarizni recently became an enrollment and retention specialist for the Christian clinic. She works with the same people she’s spent the past five years testing for HIV, but now she helps them sign up for insurance. On Tuesdays, Ponzarizni looks for potential new enrollees at the Center for Harm Reduction, a needle exchange nearby. She also visits local shelters and talks to women on the street.

“I walk them over to our clinic and help them fill out registration forms, enrolling them into Healthy Way LA,” said Ponzarizni.

If this sounds like recruitment, that’s because it is. When coverage expands, clinics will be paid for services they once provided for free. Come January, clinics will be able to take on more patients because they won’t have to absorb the costs. Homeless patients dissatisfied with a clinic because of impersonal care, long waits or other reasons will be able to seek treatment elsewhere.

Clinics are only one piece of a complex puzzle. Behavioral health and substance abuse specialists, homeless shelters and housing providers all play a role in improving health for homeless women.

“It’s really key to deliver those services together, so you don’t have a woman going to three different agencies,” said Leslie Clark, executive director of United Homeless Healthcare Partners, a network of more than 375 organizations serving the homeless in LA County.

UHHP is helping coordinate efforts to house and treat the homeless, and easing the transition into Obamacare, some details of which remain unknown. For example, Medi-Cal still won’t cover intensive psychiatric or in-patient substance abuse treatment, so the county will pay – no one is sure how much, though.

“Everyone is still trying to figure out who’s going to do what and what exactly is going to be covered,” Clarke said. “We’re trying to find out what providers need and create good dialogue so we can make the system work.”

Sometimes, referrals interrupt coordinated care. PATH (People Assisting the Homeless) provides affordable permanent housing, including some residences with onsite clinics. But PATH residents often need referrals for specialty care – plus transportation to outside facilities, and in some cases, childcare while mom or dad sees the doctor. The time and expense add up.

To hone in on the needs of homeless patients and medical providers, PATH has stationed navigators at the Kaiser Permanente emergency room in Hollywood. Navigators ask homeless patients what they need, which could be a hot meal, an ID card or care for chronic conditions rather than emergency care. Then they link the patients to primary care clinics or specialty providers.

“The [existing] system is not working for them,” said PATH community initiatives director Colleen Murphy.

The health home option available through the ACA would improve care and lower hospital costs, said Sharon Rapport, associate director of California Policy at the Corporation for Supportive Housing (CSH).

“It’s really about trying to look at a person’s needs and address them, rather than looking at how the medical system works and trying to squeeze into that,” Rapport said.

Health homes, aimed at people with two or more chronic conditions, are flexible: they can be led by a single provider, like a clinic or physician, or by a team of health-care providers, so long as they integrate primary and acute care with behavioral health and long-term services. Assembly Bill 361, signed this year, authorizes California to take the Health Home option. Medi-Cal would cover 90 percent of the costs.

Securing physical housing is the surest way to both improve health and lower hospital costs. A 2013 study by the Economic Roundtable and CSH looked at L.A.’s most expensive homeless hospital users. When these patients were provided with supportive housing – a combination of affordable housing, care management and primary and behavioral health care – hospitals saved more than $32,000 per patient annually.

For homeless women, a place to live is especially crucial. Many wander all night to avoid being victimized, so they lose sleep on top of having a poor diet and hygiene.

“As long as you’re on the street, you can be receiving the most expensive care available and you’ll still deteriorate,” Rapport said.

Vikki Vickers knows this well. Her schizophrenia intensified during the four-and-a-half years she was homeless in Santa Monica. It wasn’t until she was granted an apartment at Downtown Women’s Center on Skid Row one year ago that things turned around.

“My case manager needed to sign me up for doctor’s appointments when I got here,” Vickers said. “I couldn’t think for me.”

On the streets, Vickers only sought medical attention for emergencies because of the lengthy wait times at her clinic. Now, with onsite medical and behavioral health care, she never waits more than 15 minutes for her doctor’s appointments.

“They make it so easy to go to the doctor, that you want to go,” Vickers added.

Making health care desirable to the homeless is a huge challenge, said Dr. Susan Partovi, who treats patients at the Harm Reduction Center needle exchange. After all, most community clinics have been providing some preventative care, like pap smears and mammograms, all along. That matters little unless women can get to appointments, and many are too sick or high or afraid to leave their belongings on the street to get to the doctor’s office. Health care alone cannot make homeless women healthy.

“When you’re homeless, health is really low on your priority list,” Partovi said. “The thing that’s going to make a difference for homeless people is housing, and for a lot of them, supportive housing.”