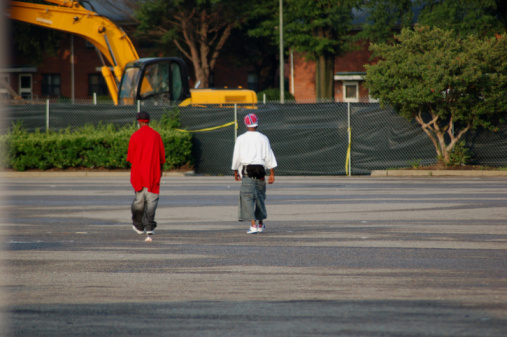 In Los Angeles last month, a superior court judge granted city officials an injunction against alleged gang members in an increasingly trendy part of the city.

The court agreed with police and the city’s DA that six criminal street gangs claiming turf in a 3.8-mile area around Dodgers Stadium were creating a public nuisance, robbing people, writing graffiti, and drinking in public.

The LAPD plans to put some 500 of the gangs’ alleged members on notice that appearing in public together in the so-called safety zone is a violation of the injunction. Violations are misdemeanors punishable by up to six months in jail.

Minor offenses like drinking in public or possessing graffiti tools will also carry additional penalties for people named on the injunction.

Gang injunctions were first put in place in the late 1980s and were intended to help communities that were victimized by gang violence, public drug dealing, drinking and threats. The city now has 46 injunctions in place, affecting 7,000 alleged gang members in neighborhoods including Van Nuys, Boyle Heights and Hollywood.

But the Glendale Corridor neighborhoods of Echo Park and Silver Lake hardly seem besieged. The streets are filled with skinny jeans-clad club-goers by night and families, kids and dogs crowd parks during the day.

Money Magazine named Silver Lake one of its ten best urban neighborhoods for 2013.

The debate over the Glendale Corridor injunction has put front and center arguments about individual rights vs. public safety.

It has drawn staunch support from the local city councilman and the neighborhood chamber of commerce, and determined opposition, not just from youth advocates and civil rights groups, but also from the elected Echo Park Neighborhood Council, made up of civic activists who advise the city council on local affairs, and from the LA Times, which editorialized against it.

Meanwhile, federal courts are reviewing provisions of California injunctions that plaintiffs say are unconstitutional, and activists and attorneys on all sides are closely watching those disputes.

Mary Anne Hayashi, who has directed an Echo Park youth center for 32 years, said an injunction might have made sense in the 1980s or ‘90s.

In the last decade, crime has plummeted in the area covered by the injunction.

The LAPD reports that just 38 violent crimes have occurred there so far this year, compared to nearly 500 in the first nine months of 2003. Gang crime is a third of what it was a decade ago and serious crime has been cut in half.

But that’s no reason to slack off, said Captain Jeff Bert, commander of one of two police stations in the area. He argued that injunctions can save lives. For instance, he noted that you need at least two people to do a drive-by shooting

“You can’t have two people [subject to the injunction] in a car. That’s the most significant part of the tool,” he said.

What’s more, Bert argued that gangs are still menacing the area, and are still at war with one another.

“It’s the crimes the FBI doesn’t track: extortion, bullying, firing shots,” he said. “We’re trying to improve the overall wellness of the community.”

But some long time residents wonder whether the interest in community health is related to shifting demographics.

For decades, Echo Park has been a slightly gritty place where artists and non-conformists of all types lived side by side with professionals and working class families.

But now, the neighborhood is losing its funk. Property values are up, rents have skyrocketed, and development is on the rise with condos, trendy restaurants and specialty shops popping up.

“Race-wise, there’s not too many Mexicans left,” said 38-year old Echo Park resident Veronica Arellano, a drug and alcohol counselor. “The ones here are holding on to what they have.”

She complains of racial profiling by police.

Bert denied that LAPD officers are pushing gentrification. He countered that those the injunction would protect are poor or powerless: food vendors, many of whom are undocumented and unlikely to call police and who are forced to pay taxes to the gangs, or the gay couple who said he was recently beaten as they left a neighborhood bar.

Arellano is unconvinced. What’s more, the injunction terrifies her. Police identified her husband, Michael Contreras, 46, in court papers as perhaps the second-in-command in the Echo Park gang.

“That’s an automatic ten years,” Arellano said as she wiped away tears, referring to extra time that is commonly added to prison sentences for gang involvement.

What’s more, she said, he could be prosecuted for simply being in the neighborhood with family members, if they’re listed on the injunctions.

“If he’s at a family event, or if he’s walking to the store with my nephew or my brother, that’s called associating,” Arellano said.

Both Arellano and Contreras ran with the Echo Park gang in the 1990’s. Contreras served seven years in prison in his late teens and early 20s. But Arellano said that he left gang life after his release, and he now works in the parts department of a car dealership.

“He’s too tired when he gets home to do anything,” she said, dismissing the notion that he could be a gang shot-caller.

The police could have made a mistake in identifying Contreras as a top gangster, Bert said, but he insists there are safeguards against misidentification.

“We have a lot of checks and balances to make sure we don’t [misidentify], because it’s such a severe thing, he said. You have to have fresh material, your sources have to be fresh.”

But Caneel Fraser, an attorney with the Advancement Project, a civil rights group that trains gang intervention workers, argued that injunctions cast too wide a net.

“It’s one more entry point into the criminal justice system…we could stop that if we limited the number of people on injunctions,” she said.

Some of the Advancement Project-trained ex-gang members who had been hired by the city to quell violence in their communities learned that they themselves were subject to injunctions, making it perilous to do their jobs, said Fraser’s colleague, Josh Green.

Others like 21-year old Alberto Cazares, say they’ve never had anything to do with gangs.

“They labeled me a gang member. I have never been convicted of anything. I don’t have any tattoos.”

Cazares was a high school student who’d won a college scholarship from the LA housing authority when he was named on an injunction aimed at cracking down on the Culver City Boys gang.

Now an organizer for the Youth Justice Coalition, a group that opposes injunctions, Cazares said that since high school, he’s had to think twice about his daily activities just to stay out of trouble.

“The way I dress, who I talk to, the route I took to school. I had to be strategic about when I could walk outside to throw out trash.”

Despite his carefulness, several years ago, police detained him and a friend. He wasn’t charged with a crime, but his friend was accused of violating the injunction’s 10 p.m. curfew.

A ruling on the case is expected in the coming months.

Although gang injunctions have mostly passed constitutional muster, that could change as federal judges consider the curfew case and another court challenge that arose in Orange County.

Last April, the Ninth Circuit Court of Appeals heard arguments in Vasquez v Rackauckas. The case questions whether it was constitutional for the city of Orange and the OC DA’s office to subject people to an injunction without giving them an opportunity to contest the evidence against them or to have it reviewed by an impartial third party. In 2011, a federal district court judge ruled it was not, and Orange County officials appealed the decision.

Additionally, in recent weeks, the Advancement Project’s Fraser and Green have begun to scrutinize another controversial aspect of gang injunctions: It seems nearly impossible to escape them, even if an individual has changed his ways or was never a gangster in the first place.

“I’m always re-shocked at the confusion that’s out there,” Fraser said.

“It’s a black box process,” Green argued, noting its lack of transparency. The city attorney’s office, which approves names for injunctions, is also judge and jury when it comes to removal.

Fraser and Green have established a new legal clinic at the Advancement Project to assist former gang members and those who say they’re wrongly listed on injunctions.

The two plan to document the obstacles to removal, and work with the city attorney to streamline the process.

Newly elected LA City Attorney Mike Feuer has expressed enthusiasm about the work, even as he’s argued strongly for injunctions.

He’s added a new sunset provision to the Glendale Corridor injunction. It’s only enforceable for five years, after which time, police will have to re-serve those who they believe are still active gang members.

But by then, Fraser and other activists hope to prove to Feuer and other officials that gang injunctions are heavy-handed and counter-productive.

She noted that her group has helped the LAPD top leadership to embrace community policing, and shed the us vs. them mentality for which the department was long known.

“Gang injunctions are the last bastion of the more old school stuff,” she said.