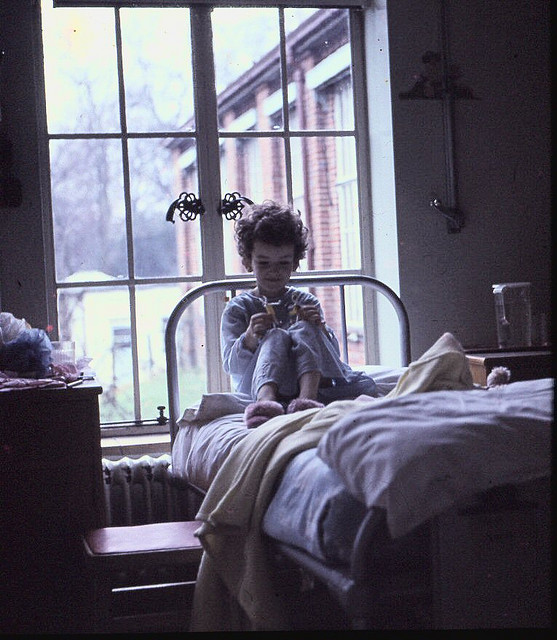 In November, seven-year-old Luke French started throwing up. The vomiting was only occasional, came without any warning and passed without much fanfare. Luke’s mother, Lisa French, at first thought her son was just sick, some bug perhaps, but he had no fever. Doctors ordered a litany of tests, but the cause of Luke’s vomiting remained a mystery.

On the afternoon of Friday, December 7, a date Lisa French recites without hesitation, she received a call from Luke’s pediatrician. Evidence of an elevated enzyme, a possible indication of cancer, had been found in Luke. The pediatrician advised an MRI immediately. So, during a Los Angeles area Friday afternoon rush hour, less than three weeks before Christmas, Lisa drove Luke from their home in Glendale to an MRI facility in Pasadena that agreed to stay open late and run a scan.

The scan revealed that Luke had two brain tumors, both medulloblastoma, malignant tumors that begin in the lower part of the brain and can spread to the spine.

The larger of the two was four centimeters in diameter, lodged between his cerebellum and brain stem. The smaller tumor sat on the third ventricle of Luke’s brain. The pediatrician referred the Frenches to Children’s Hospital in Los Angeles (CHLA), where Luke checked in that night. On December 11, doctors performed surgery to remove the larger of the two tumors, and three days later biopsied the smaller growth. Luke went home for a few days on Christmas day, and started chemotherapy on January 3.

“It’s definitely difficult, certainly something you never expect to go through with your children,” Lisa French said.

For his treatment, Luke, who recently turned 8, was enrolled in CHLA’s Head Start program. Head Start, devised by Dr. Jonathan Finlay, treats brain tumors using no or limited amounts of radiation. The short term effects of radiation, such as nausea, fatigue and and loss of appetite are difficult for children and adults. But children also suffer from long term effects of radiation that include lower IQs, learning disabilities, attention deficit and memory loss. The younger the child during treatment, the greater the effects on the brain.

Because of the detrimental effects that radiation can have on a child’s brain, the Head Start strategy is to use as little radiation as possible. Finlay and his team treat their patients with four or five regular courses of chemotherapy, then blast the tumor with the equivalent of a year’s worth of chemotherapy in just six days. Because the last treatment is so toxic, bone marrow is removed from the patient prior to treatment. After the final dose of chemotherapy, doctors perform a stem cell transplant with the harvested marrow. While it’s been long-established that children under three should not receive radiation, children up to six receive no radiation in Head Start. Older children receive reduced doses.

In mid-June, Luke completed the transplant phase of his treatment and was scheduled to go home for a couple of weeks before starting limited radiation.

Finlay first developed the Head Start protocols in the early ’90s. His team is currently wrapping up Head Start III, with plans to proceed to Head Start IV. Head Start is now the accepted protocol at 60 institutions worldwide.

Brain cancer is the second most common type of cancer in children, after leukemia.

“I say to the families all the time, there’s a miracle of creation when you consider how many billions of cells are dividing and maturing that we aren’t all dead of cancer before we’re born,” said Finlay, head of Neuro-Oncology and Director of the Head Start Program at Children’s Hospital Los Angeles. “It’s often lousy luck.”

“Right from the outset of Head Start back in the early ’90s I recognized, as did my colleagues, that it wasn’t going to be enough to show, oh look, we cured more kids,” said Finlay, a native of Manchester, England. “We have to show that we’re preserving the intellect by avoiding radiation and that we’re preserving other organ functions.”

Finlay continues to push barriers in treating medulloblastoma and uses his clinical experience to treat difficult cases, such as young patient Vincent Gayle. Vincent had suffered headaches from a young age with no explanation. In April of 2008, at the age of six-and-a-half, the headaches intensified. Vincent’s mother, Margaret Bennett-Gayle, took her son to a local emergency near their home in Hayward, California. A scan revealed three tumors: One on the cerebellum, one on the third ventricle of the brain and one on the spine.

Vincent was given a standard treatment: surgery to remove the tumors, doses of radiation to destroy any left over cells, and then a schedule of chemotherapy. (Specific treatment plans vary, depending on the patient’s age, location of the tumor and amount of remaining tumor). Vincent went into remission for 18 months, but the medulloblastoma recurred in 2010. Margaret reached out through a pediatric brain tumor network looking for anyone who had positive outcomes from recurrence of medulloblastoma. Two people responded and both referenced Finlay.

“So I said I have to talk to this Dr. Finlay guy,” Margaret Bennett-Gayle recalled in a recent interview, sitting on a patio at CHLA while Vincent enjoyed reading time upstairs in his hospital room.

In 2010, Finlay put Vincent into Head Start, and he went into remission. In February of this year, Vincent’s cancer recurred. Finlay placed Vincent, now 11, through a second round of Head Start. He recently completed the transplant phase, but was struggling in recovery.

“There’s probably only one other center in the country that would do a second transplant, because there’s no experience on it,” Finlay said.

“There are concerns,” Finlay added. “You can’t keep doing therapies like this. Will it cure him? I’m not a prophet. God doesn’t give me the powers of prescience and prediction.”

“When you talk to Dr. Finlay, you know he wants to cure your child,” she said. “You always think that your child, there will be a miracle, or you’re hoping. Because once you even think about palliative care, you’ve given up and you’ve lost hope and so has your child.”

Vincent isn’t the only example of Finlay taking extraordinary steps. He treated a child whose medulloblastoma spread to his bone marrow. To complete the Head Start program, Finlay used the child’s brother’s marrow for the transplant. The child stayed in remission for two years before succumbing to the disease last year.

Dr. Girish Dhall, the Clinical Director of Neuro-Oncology and an Assistant Professor of Clinical Pediatrics at CHLA, is the Associate Director of the Head Start program. He first started working with Finlay while a fellow at NYU, where Finlay worked from 1997 to 2003.

Dhall spoke about the challenges physicians face in balancing hopeful prospects and cold reality when it comes potential cures for cancer.

“It’s very hard,” Dhall said. “I believe . . . there’s no point in giving anybody false hope in my mind. That doesn’t work in anybody’s favor. We focus on the positive things, but sometimes you have to say what it is. If it’s very hard to cure a tumor, then you actually have to tell the family that it’s hard to cure.”

Doctors Dhall and Finlay are preparing for Head Start IV. According to Dhall, the basic idea is to perform three cycles of induction, then divide the transplant phase into three mini transplants.

Finlay said he sees more than 120 new patients each year with various types of brain cancer, and receives emails from parents and physicians around the world seeking his services or advice, much like when Vincent Gayle’s mother reached out in 2010.

“I have never met another doctor like Dr. Finlay,” Margaret Bennett-Gayle said. “And whether or not his approach is right or wrong, in my heart it’s 100 percent right, and my son would not be here if it wasn’t for Dr. Finlay.”