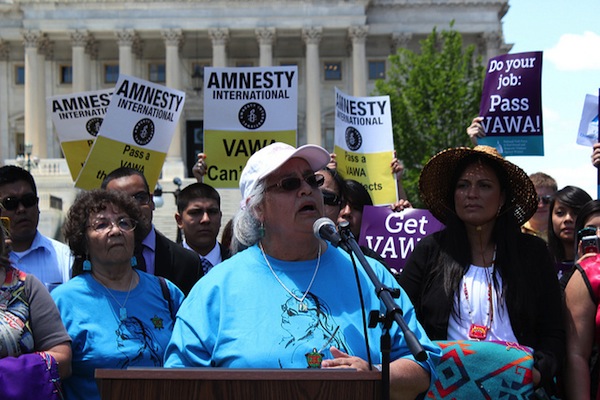 Native American women are physically abused, raped and stalked more than women of any other racial group in the nation. A new provision in the Violence Against Women Act, passed in February, allows Native American courts to prosecute non-Native offenders for the first time since the 1970s. While most expect the provision to help address violence against Native women, it also poses challenges for California’s tribal courts, which work with far fewer resources than county courts.

Nationally, non-Native men commit 86 percent of crimes against Native women, according to the Department of Justice. Preying on women living on Native lands in Minnesota, for instance, is common during hunting season, a disturbing parallel pointed out by Native American novelist Louise Erdrich in a recent New York Times commentary. The offenders were secure, Erdrich suggested, in the knowledge that tribal police couldn’t arrest them.

“To protect Native women, tribal authorities must be able to apprehend, charge and try rapists — regardless of race,” she wrote a few months after winning the American Book Award for The Round House, a novel set in the aftermath of a rape on tribal land.

The new provision in the Violence Against Women Act (VAWA) came after a decade of such activism.

Juana Majel-Dixon of the Pauma Band of Luiseño Indians in Southern California was a part of the fight for the provision from the beginning. She is Vice President of the National Congress of American Indians and has a traditional appointment to the Pauma legislative council.

Ten years ago, a delegation of American Indian women went to the national task force that administers the money for VAWA programs. They asked for two percent of VAWA funds to help Native Americans.

At that time, rates of sexual assault and domestic abuse were just beginning to be tracked by race.

“This is starting to look pretty scary out there, how many Native women were being harmed,” Majel-Dixon remembers saying. The board ended up allocating 10 percent of funds to Native American women.

The extent of the problem became clear to them as they were advocating for victims of abuse, Majel-Dixon said.

The money allowed them to set up services specifically for Native American women and to collect data about the issue. “We ourselves realized there were no protections in Indian country,” Majel-Dixon said.

So they started to push for the provision to allow for the prosecution of non-Native defendants.

Yurok tribal member Elsie Losey says the provision would have helped her escape her abusive marriage. She grew up in Eureka watching her parents’ violent fights.

“I had this pattern of looking after the bad boy, the one that was going to push me around,” Losey said. “I thought it was a sign of love.”

A series of bad boyfriends eventually led to an abusive relationship with a non-Native construction worker with whom she had three children. Her partner isolated her from her family, tribe and the outside world. The first time he brutally beat her was when she left the house to visit a friend while he was at work.

“I wouldn’t leave cause I thought I loved him and I thought he loved me,” Losey said. “The first beating I will never forget. I could take the mental abuse but the physical—oh, my god!” Sometimes, Losey said, her husband would hit her with 2x4s from his job site.

Losey is not alone. A survey intended to help develop a domestic violence court was recently conducted among five northern tribes in California—including the Yurok. Almost half of the women responding reported that a partner had abused them. Slightly more than 70 percent of respondents said that they thought the perpetrators of domestic violence were equally Native American and non-Native. Many also said they felt more comfortable addressing these crimes with tribal police and in tribal courts.

But tribal courts, which are small and short on funding in California, may find it difficult to meet the requirements to prosecute non-Native defendants. None have their own jails. California is also one of a few states where Native and non-Native authorities have equal jurisdiction on tribal land, so the federal government doesn’t provide as much funding to tribal courts here.

There are only 22 tribal courts in the state, serving 40 of the 107 federally recognized tribes in the state. Many of the courts are also fairly new. The rest of the tribes rely on local authorities.

The new VAWA provision may be most helpful in states where tribal justice systems are more robust, like Minnesota, but until recently had no jurisdiction over non-Native people.

The members of the five Northern California tribes expressed more concern with the lack of cultural competency among non-Native authorities and service providers. The five tribes are currently developing a unified approach to domestic violence so the courts can better serve their members.

Forty-three percent of respondents felt that law enforcement—city and county law enforcement in particular—did not treat members of the community fairly in reports or investigations of domestic violence.

“I went to court once, and it went to pre-trial, and the judge told me if there was another domestic violence incident that brought me to court, they were going to send CPS to get my kids, and they would take me and my husband to jail,” said one victim of domestic violence participating in a focus group that was part of the survey. “And now I feel that I can’t turn to anybody if I have an issue. Or if we have a verbal altercation, I feel that I have to stay there and endure it. And stay and stay and stay because I can’t turn to anybody else. And that’s what makes it rough.”

Losey said that when she called the police about the beatings, her husband would be very calm and tell them that he would never hit her. With the police in the house, Losey finally felt protected, and would let her anger about the abuse show. So the police accepted her husband’s version of events.

She didn’t know where else to turn. “I thought I wouldn’t be able to make it without him, I ran my family support so low in the ground,” Losey said. “So I stayed.” She remained in her abusive relationship for seven years.

Dealing with Native authorities would have made her feel like she was understood, Losey said. “I would have felt way more comfortable; I think it would have went a lot more smoother for me.”