Advocates and activists allege environmental racism in the Coachella Valley 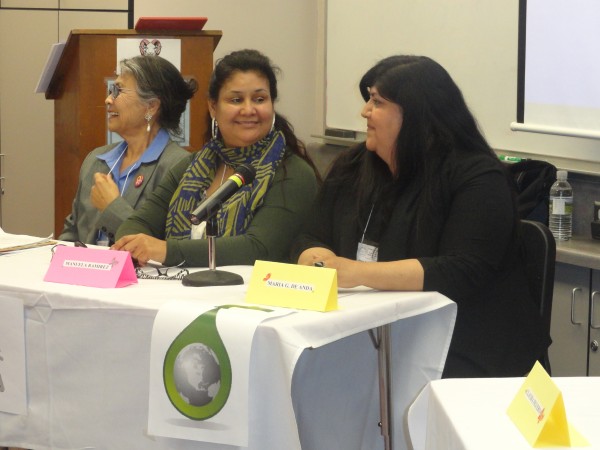 Toxic waste dumps. Poor air quality. And the slow death of the Salton Sea. The Eastern Coachella Valley has serious environmental problems – and now locals are getting involved.

Recently several hundred people gathered at a high school in Thermal, California at the inaugural Coachella Valley Environmental Health Leadership Summit. They listened to experts and brainstormed solutions on a variety of topics.

Eduardo Guevara, with a group called Promotores Communitarios del Desierto, organized the event. “We just want to bring awareness of environmental health and environmental problems that we have in the area, and to get the agencies and the residents closer together.”

Rosie Nava-Bermudez, an activist with Comite Civico del Valle, says at the summit, “Partnerships are being formed. We’re providing a map of future steps that need to be taken. The next step is to formulate a plan of action and prioritize the different problems in the community.”

The keynote speaker, Jose Bravo of the Just Transition Alliance, said that poor, non-white communities in the East Valley harbor more than their share of pollution – and called it a case of environmental racism. “So what is environmental justice? Communities that bear a disproportionate environmental impact by polluting industries, waste dumps, incinerators, polluted air, water and soil.”

Mr. Kim Floyd, a volunteer for the Sierra Club, agrees. “If this were happening in a wealthy area I’m convinced we’d get solutions much more quickly than we have here in the east valley.” Floyd is particularly troubled by the massive odor problem reported in 2010-11 at Western Environmental – a soil recycling facility in Mecca that sits on property owned by the Cabazon Band of Mission Indians.

Neighbors said the stench from the giant piles of contaminated dirt made them sick. Celia Garcia, who taught at nearby Saul Martinez Elementary School, said it disrupted much of the school year. “Exposure to the noxious smells at Saul Martinez was really, really bad.”

The authorities took soil samples and tested the air quality but everything came back within legal limits. At a public meeting in May 2012, the experts said they couldn’t definitively explain how, or if, the odors made people sick. The company denied it was the cause of the odor. It’s the kind of thing that frustrates Floyd. “There have been odor problems and a lot of investigation, a lot of work done but we really struggle on solving the issue. How do we get something actually fixed is our dilemma I think.”

That includes money to install a new air filtration system at that elementary school, retrofit or replace diesel school buses, synchronize traffic lights and pave more dirt roads. “Children will no longer have to walk to school along a dirt road where their parents are driving to get to work in the morning.” Benoit told the crowd. “They will be breathing much cleaner air and the valley will have cleaner air as a result.”

Organizers pleaded with residents to take action by talking to their legislators, speaking at public hearings and reporting new cases of pollution.

A new computer system – highlighted at the conference – will ensure that environmental complaints get the attention they deserve. IVAN, which stands for Imperial Visions Action Network, is a website launched by a community task force where people can report pollution. IVAN’s activists follow up and then route the case to the appropriate authorities.

Bravo says that in the past, poor immigrant communities have served as a sort of sentinel for environmental abuse. “Agencies, who we at some point believed have our best interests in mind, have been using us as the canaries in the coal mine. And that’s a fact.”

An incident at the Salton Sea last year is instructive. In September a storm churned up the waters, releasing nasty sulfur-smelling gas caused by rotting vegetation and dead fish at the bottom of the polluted lake. The stink is a periodic problem in the Coachella Valley but this time the fumes blanketed most of Southern California. All of a sudden, the longstanding problem at the sea became statewide news.

People in the east valley are used to the nasty smell from the Salton Sea’s regular fish die-offs. They occur when pesticides from agricultural runoff trigger an algae bloom, which lowers the water’s oxygen level and kills millions of fish. The problem has been studied for decades but very little has been done because the proposed fix could cost billions of dollars.

Experts have warned for years that the Salton Sea is shrinking, so the problems will only get worse. “It will dry and all the sediments that are in the water now are going to be exposed and the wind is going to blow them away,” Guevara says. “And that’s gonna cause a lot of respiratory issues. It’s a problem that it’s gonna affect us all. If we make more people aware of that, we will get more people to get involved and start pushing for a solution. “

Advocates and activists allege environmental racism in the Coachella Valley