Bridging the health gap may start with building trust 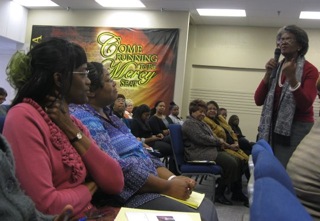 “We wanted to have this in a smaller setting so people can be comfortable about having conversations,” Rev. Nailah Hubbard said of the African American Health Forum, the first of its kind, held earlier this month at the Sound Life International Ministries church.

The often sensitive and personal conversations that took place centered on respect from health professionals, discrimination and the general mistrust that African Americans have historically felt when interacting with the health care system.

“One of the incredible reasons that we have some of the health care disparities, that lack of trust, comes from deep down inside,” said keynote speaker Dr. Sandra Davis, a Stockton-based leader in nursing with more than 30 years of health-care experience. “We can’t even imagine where it came from on some occasions, but it’s clearly there.”

Although times have changed, Davis said, there are still some cultural differences that need to be addressed in clinical settings to improve trust in relationships between African Americans and their doctors.

For instance, many African-American women are not accustomed to strangers or even acquaintances calling them by their first name, especially older women, so it is disheartening when medical staff does it. Not being acknowledged at the reception desk or not making eye contact is disrespectful to all patients, not just African Americans, the group agreed.

The African-American population in Merced County is small compared to general population. The U.S. Census 2010 estimates out of the 255,793 people living in Merced County only about 3.9 percent or 9,926 people are African American making it difficult to find reliable data on health disparities.

The data that is available paints a grim picture of African-American women’s health in the county and that of the San Joaquin Valley.

The California Interview Health Interview Survey or CHIS from the UCLA Center for Health Policy Research reports that 51.2 percent of the 2,000 African American women surveyed in Merced County from ages 18 to 65 describe their health status as poor, but the also note that is statistically unstable because of the small sample.

African American women are suffering from sexually transmitted disease at higher rates than their White, Latina and Asian counterparts. Slightly more than 11 percent of reported cases of Chlamydia and 33.3 percent reported of gonorrhea cases in the county came from the women in this small population, according to the California Department of Public Health’s 2011 sexually transmitted disease statistics.

Marilyn Mochel, a registered nurse and consultant who worked in public health for many years, said the forum came about after a group of community leaders watched a screening on “Unnatural Causes,” a documentary on racial and socioeconomics inequalities in health, and felt the community should know more about the root of health disparities in the African American community.

“The impact of racism on the lives of African American women,” she said, “is definitely one of the social determinants of health.”

A recent study from the American Psychological Association’s Journal of Counseling revealed that “perceived racism may cause mental health symptoms similar to trauma and could lead to some physical health disparities.”

Although the study didn’t collect data on the impacts of physical health, it points to other studies that associate perceived racism to diseases that commonly afflict African Americans, such hypertension, that has been with stress.

The social and subtle discrimination women feel can lead them to become detached. Erica Alexander, coordinator for the Black Infant Health Program in Fresno County, said she works exclusively with African American women and has found that while they do go to their doctor’s appointment, they don’t speak up engage with their physicians.

“I ask them ‘who had a doctor’s appointment this week,’ and they raise their hands, but then they start asking me questions they should have asked their doctors.”

Rev. Hubbard, a former chaplain at Stanford Hospital in Palo Alto, was impressed by the hospital’s “guest services” culture in which everyone is treated as if they were guests. The hospital offers personal assistance, resources, and support for guests and visitors to ensure that no one leaves a visit with unanswered questions.

Others recommended that local clinics and the hospital hold diversity and cultural trainings for its staff on a more continuous and consistent basis instead of once a year and to make sure all patients fill out a satisfaction survey once they leave.

More solutions will be discussed in November when the committee that put the forum together plans to hold a larger conference on health and closing the health gap for African-Americans women.

“Not every experience is terrible,” Rev. Hubbard said, “but in terms of African American women’s health care we want to get in the system because we are not even participating.”

Bridging the health gap may start with building trust