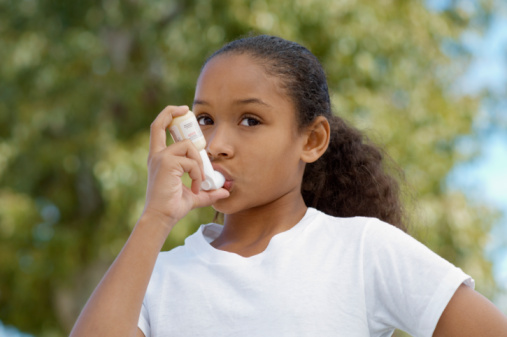 Children living in poverty in California and elsewhere in the U.S. are much more likely to suffer from asthma than their wealthier peers. A new study suggests that a symbiotic relationship between pollution and allergens common in low-income urban areas makes children more vulnerable to the chronic and potentially life threatening illness.

Allergies to roaches have been long understood as a factor in higher asthma rates among children in poorer neighborhoods. But the new study by researchers at Columbia University’s Mailman School of Public Health, which was published today in the Journal of Allergy and Clinical Immunology, suggests that exposure to roaches and air pollution combine to create and intensify allergic response in children.

“These findings suggest that exposures in the home environment as early as the prenatal period can lead to some children being at much greater risk for developing an allergy to cockroach,” said lead author Matthew Perzanowski in a statement. “In turn,” he said, “[this] heightens their risk of developing asthma.”

The study focused on African-American and Dominican mothers who lived in two low-income areas of New York City and did not smoke. The final group included 349 mother-child pairs. Researchers measured maternal exposure to roach allergens during pregnancy by collecting and testing dust from kitchens and beds. They also took blood samples from the mothers to test for the presence of polycyclic aromatic hydrocarbons, or PAH, harmful components of air pollution from sources such as diesel emissions and cigarettes.

Consistently reducing exposure to roaches and PAH pollution would reduce roach allergies and in turn could reduce rates of asthma, the study concluded.

It is difficult, however, to eliminate roaches in the multi-unit apartment buildings that are common in cities. And pollution could only be reduced consistently enough to impact health by putting in place major public health interventions.

These interventions may become all the more important as rates of asthma increase dramatically. About 17.5 million adults and more than 7 million children had asthma in the United States in 2009, compared to 9.5 million adults and slightly more than 5 million children in 1995. The disease also affects some groups disproportionately. African Americans are more likely to have asthma compared to whites and more likely to suffer complications from asthma, including death.

“Asthma among many urban populations in the United States continues to rise,” said Rachel Miller, a co-author of the study, in a statement. “Identifying these complex associations and acting upon them through better medical surveillance and more appropriate public policy may be very important in curtailing this alarming trend.”