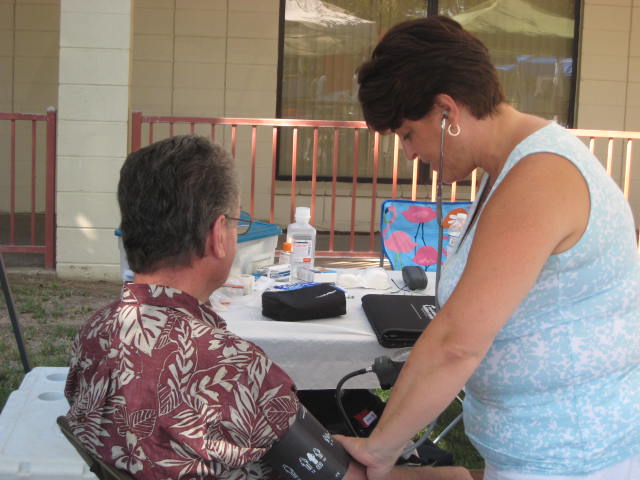 Three years ago, Paulo Campo suffered a head injury from soccer practice. The initial brain scan revealed the bleeding, as big as a baseball, near his optic nerve. To complicate the matter, he also had mild hemophilia: his blood could not clot well. At the Children’s Hospital Central California in Madera, his family prayed for his recovery.

The trauma coordinator, Carlos Flores, also a Registered Nurse and a Faith Community Nurse, visited Paulo daily. He asked permission from the family to pray over the boy with them. By his fourth day at the hospital, the bleeding had shrunk away from the optic nerve, and the source had disappeared. Everyone, including the doctors and Paulo, thought the recovery was remarkable.

“I felt I was lucky to be alive,” he said. Paulo is now a 13-year-old straight-A’s student with a passion for art.

“That was without any kind of intervention,” Flores said. He attributed the recovery to “the amount of prayer that had happened in a very short period of time and the intensity of the prayer from people in a couple of different countries.”

Sally Flores, who works with husband Carlos, coordinates the diocesan Health Ministry with another faith nurse, Roxanna Stevens. They push for evidence-based changes around Catholic churches in the San Joaquin Valley, from automated external defibrillator programs to flu prevention measures.

Faith nurses can take blood pressures and do basic First Aid, but they don’t diagnose. They give referrals and health education with a theological basis and “a hug,” Stevens said.

Sharon Duke, a Clovis resident, received physical, emotional, and spiritual support from Stevens after being diagnosed with ulcerative colitis. In Duke’s condition, her large intestine swells, with symptoms often triggered by stress and certain foods, such as spicy dishes. Stevens guided her in understanding the instructions from the doctor and the dietitian.

Many more people, including the poor and the homeless, have found help from Stevens for over a decade, says Jacqui Sotelo-Ramirez, a parish operations coordinator who has referred individuals to her.

The Health Ministry started in parishes about 13 years ago. A survey of almost 2,000 local Catholics revealed similar patterns of health needs, ranging from more support for cancer and heart disease to having more joy and laughter to end-of-life issues.

The Raphael Health Ministry in Clovis is one of the oldest in the diocese, says Stevens, who worked with Monsignor Raymond Dreiling in its establishment.

One of his main concerns was “those who were shut in their homes,” he said. Stevens spearheaded a solution: she promoted a holistic kind of nursing.

Since then, faith nurses have reached out through home visits as necessary, especially to senior citizens who may be at risk for falls, dementia, and other health/safety issues. They may aid with the groceries, transportation to church, adherence to medications, and environmental safety, including suggestions for bathroom modifications. They share updates with concerned family members. Faith nurses help only when invited to by the patients and families.

Msgr. Dreiling, now the Spiritual Director of the diocesan Health Ministry and head of the Catholic Church of Visalia, envisions that the ministry will eventually involve preventive medicine – from health education to emergency preparedness.

Among the challenges they face is addressing individual needs in the midst of diversity.

“We have such a diverse group: ethnic-wise, generation-wise, economic-wise… [and in] literacy,” Deacon Henry Medina said.

The movement is spreading across the diocese, which covers around 140 churches from Merced to Bishop, California, including a new program in Visalia. As most of the region is rural yet diverse, the nurses and other volunteers strive to address disparities, such as in healthcare access and mental health.

One priority is the Hispanics who comprise 75 percent of the diocesan population. Many of them speak primarily Spanish.

“There’s so much misinformation or no information being given to them because of the language barriers,” Msgr. Dreiling said.

Nowadays, Carlos Flores also promotes safety and wellness, especially among children and families. These efforts, with the Children’s Hospital, reached 14,000 people last year. He aims to teach youth about spiritual care too, as much as the law allows.

“[We] accompany people on their faith journey, health journey, to make connection between faith and health,” says Sally Flores.