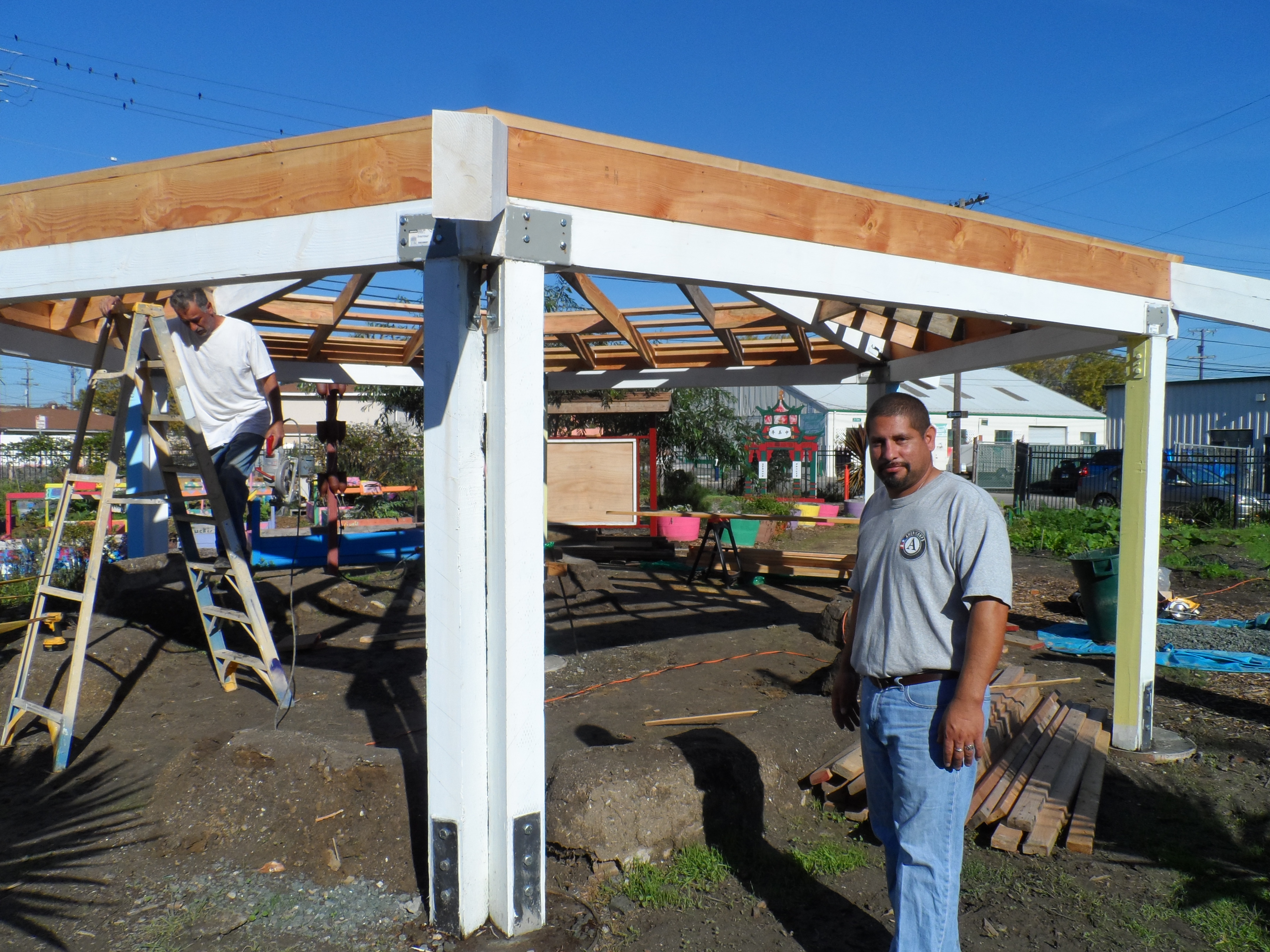 What started as a community garden in the Chinatown neighborhood of Salinas has blossomed into the Salinas-Marina Community Food Project. Three community gardens provide fresh food, life skills and a sense of community for the homeless, recovering addicts, unemployed and local residents.

While envisioning renewal in Chinatown in meetings with stakeholders and advocates, this question came up: “What is going to inspire people to see that change is possible?” said Dr. Seth Pollack, Professor of Service Learning and Director of the Service Learning Institute. A garden seemed like a perfect visual for that. “It turned a dump into something beautiful,” he said.

The Service Learning Institute employed 13 homeless and marginally housed people to build the Chinatown Community Garden on an empty lot on Soledad Street with funding from the U.S. Department of Housing and Urban Development (HUD).

Sara de Campos was one of the builders. After a chain of devastating events in her life, she ended up with her five-year-old daughter at Dorothy’s Place, a homeless shelter, in 2007. She was hired to help build the garden and oversee student volunteers from CSU-Monterey Bay, where all students are required to take courses that engage them in community service.

“The garden project lifted my spirits way up. It reinvigorated my pride in myself and my community,” de Campos said.

“The garden is always very beneficial to anyone who works there,” said Kathy Young, an owner of Out of the Woods Inc. a window distributor located next to the garden. Young described the garden as “symbolic of hope for this area.”

Wayne A. Ross II is another graduate of the program.

“The garden was a place to sit peacefully and to process instead of using drugs as I’d done in the past,” he said.

At 51, he’s now got a 3.78 grade point average and is the associated student body president at Hartnell College in Salinas. He’s due to graduate with an AA degree in social and behavioral science in May.

HUD funding ran out for the garden’s formal paid job training programs, but through free workshops on gardening and cooking and the availability of beds for people to adopt, the learning continues.

Two more gardens were built by volunteers of the nonprofit Rebuilding Together in Marina on the Fort Ord property in 2011, said Iris Peppard, project manager for all three gardens of the Salinas-Marina Community Food Project and Executive Director of Everyone’s Harvest, a non profit running four local farmers markets.

Shoreline shares about 40 garden beds with partners that include Hope Services, a program that helps adults with developmental disabilities, Marina Tree and Garden Club, the Community Hospital of Monterey Peninsula and Veterans Transition Center.

Pueblo del Mar resident June Kumada started gardening there because her toddler loved playing in the garden. Now she takes home fresh vegetables and her daughter loves the spinach. Kumada likes having a healthy project to work on with the other residents.

“The number one thing is it’s been a family, community builder,” said Janet Cooke, program manager for Pueblo del Mar. She’s also grateful for the service learners, the CSUMB students who come every Saturday to teach educational workshops such as how to cook fresh vegetables.

Bill Taylor, the chef instructor for Shoreline’s culinary program, said his students cultivate vegetables and herbs including all the lettuce needed for the events they cater at the Good Will’s Shoreline Conference Center. A professional gardener, funded by a grant through CSUMB, comes two to three times a week to teach gardening.

“I was surprised how excited the students got. It puts you in touch with something primeval,” Taylor said.

Despite the success of the gardens, funding is always an issue. 2013 will be a year of transition for the Food Project as a USDA grant through the university expires in August. Everyone’s Harvest hopes to be able to manage the three gardens, said Peppard. The Service Learning Institute will relinquish its co-management role, although students will continue to work with the gardens.

One step the Chinatown Garden has taken towards self-sufficiency is launching a small composting enterprise. It is producing worm castings and selling them as soil amendment at farmers markets. Local farms like Serendipity Farms are helping with production and sales of the compost.

A gazebo was recently installed which will soon support solar panels to power a “worm warmer,” so production doesn’t slow down in the winter. Cal Poly San Luis Obispo students designed the system for the garden, Pollack said.

Plans are to create composting classes for the community, educating master composters who can spread that knowledge around, said Javier Rodriguez, an AmeriCorps Volunteer Infrastructure Program Member. He is paid a small stipend through a grant and university funding to serve as the garden steward in Chinatown.

Although there are still drugs in the area, the garden has become a safe haven. The drug dealers actually protect it, Rodriguez said, and there isn’t any vandalism. Ten years ago he never would have brought his daughter here. Now they cultivate a garden bed together.

Growing their own food gives people a sense of self-sustainability, Peppard said. “People want to be productive. It gives them a sense of dignity.”