Fresh & Easy’s Demise: What Does it Mean for Food Access in California? 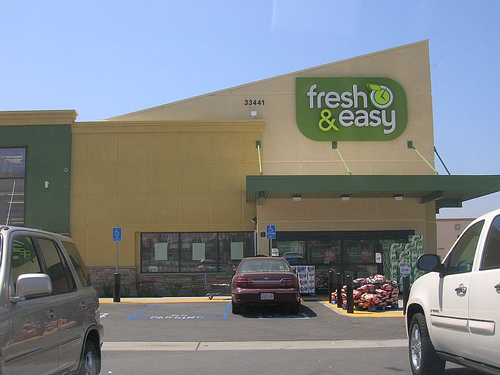 When news broke last month that British supermarket giant Tesco is getting ready to drop its Fresh & Easy grocery store chain, the announcement came as a blow to many nutrition advocates here in California. The chain had built a reputation for bringing small-scale food stores to neighborhoods across the state that have little or no access to supermarkets, like South LA and San Francisco’s Bayview-Hunters Point.

Does the demise of Fresh & Easy mean healthy food stores can’t make enough of a profit to survive in these neighborhoods?

Far from it. And with other major retailers now testing out small-footprint grocery stores in low-income communities across the country, lessons from Fresh & Easy’s experience in California will be critical for business and health alike.

Trends in the supermarket industry have made it hard for inner-city markets to compete with big-box stores. Since World War II, with the rapid suburbanization of America, grocery stores have migrated out of cities and become nothing less than huge. Shoppers now expect supermarkets with acres of parking and services like banking and pharmacies on-site. Today the average full-service supermarket spans about 48,000 square feet – nearly five times the size of the typical Fresh & Easy – and many low-income communities are left without full-service grocery stores.

In spite of a national trend toward larger supermarkets, small-scale markets are now on the rise, coming back to the city to tap unmet demand. Many major chains including WalMart, Target, and Safeway are experimenting with small-format stores in low-income neighborhoods, stocking shelves with fruits, vegetables, and other healthy foods. The drugstore chain Walgreens has begun carrying fresh foods in stores nationwide, a venture that began as a pilot project in underserved Chicago neighborhoods.

The convenience store industry, too, sees the potential for profit in moving toward healthier inventory. Convenience stores have long been practically synonymous with liquor and cigarettes, but an executive at Plaid Pantry, a convenience store chain with more than 100 stores in Oregon and Washington, told the industry trade publication Convenience Store Decisions last year that the chain is “progressively getting into” the health trend, boosting the presence of healthier products on its shelves across the board.

There are lots of reasons to think small when it comes to grocery stores. Most neighborhoods can accommodate a 10,000-square-foot site, the size of a typical Fresh & Easy. The cost of developing a store this size is much lower than bringing in a new supermarket. Smaller stores also require a smaller customer base to make them financially viable, meaning they’re more likely to succeed in neighborhoods that may not be able to sustain a large-scale supermarket to shareholders’ liking.

Given the growing trend in small-format discount groceries, why wasn’t Fresh & Easy able to deliver? Theories abound, and while no doubt a number of strategic miscalculations led to the chain’s demise, many observers point to one major factor in particular: the company didn’t tailor its offerings to the communities it served. A store in Hayward, for example, carried essentially the same selection as a store in Bakersfield, San Diego, or Long Beach.

The Hartman Group, a research firm analyzing consumer behavior and trends, says all food retailers – large or small, mass or specialty – must take pains to match their inventory to the local customer base.

“Unless the consumer is allowed to drive and shape the experience, his/her impact is not being felt,” the firm wrote in an analysis issued shortly after reports surfaced about Fresh & Easy’s impending demise. “This doesn’t mean that broader, corporate strategies or initiatives can never be effective, but you have to nail down the local part before you can expect to be successful.”

That’s hardly news to independent grocers, who’ve long had the community connections and the flexibility to align their product mix with residents’ needs. While Fresh & Easy may not have proved profitable enough for Tesco, small grocery stores offering fresh foods are still cropping up in underserved neighborhoods around the country – and these successors should take a lesson from local grocers if they expect to truly succeed.

Hannah Burton Laurison is a senior planner and Christine Fry is a senior policy analyst at ChangeLab Solutions, a nonprofit policy research and training center based in Oakland.

Fresh & Easy’s Demise: What Does it Mean for Food Access in California?