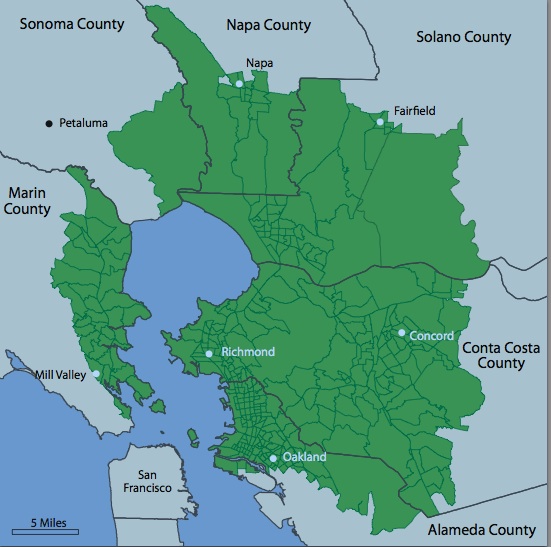 Though the exact causes of breast cancer remain a mystery, a new mapping study in California has brought researchers another step closer to unlocking answers.

By charting data on a hyper-local level, the California Breast Cancer Mapping Project of the Public Health Institute discovered significantly heightened rates of invasive breast cancer in four areas that had previously gone undetected. In the newly discovered areas of concern — the report stops short of calling them “cancer clusters” — researchers found the invasive breast cancer incidence to be 10 to 20 percent higher than the state average.

The four areas include swaths of the north and south San Francisco Bay Area, neighboring sections of east Ventura and west Los Angeles counties, and the southern portion of Orange County, spilling into a small part of Riverside County. The project used data reported to the California Cancer Registry from 2000 to 2008.

In the past, breast cancer rates had been calculated only on the county level. Eric Roberts, the lead author of the study, explained that the old method missed some significant pockets, as county boundaries are somewhat arbitrary when it comes to mapping disease.

“The idea is that we can think about areas of concern for invasive breast cancer in terms of areas that are smaller than counties or that cross county boundaries,” Roberts said.

Marin County — a relatively small, homogenous area — has long been known to have an elevated rate of breast cancer amongst its residents. But elsewhere in the Bay Area, leaders in breast cancer advocacy are not surprised by the new study results.

“It confirms what we know to be true anecdotally from the women we serve,” said Peggy McGuire, executive director of the Women’s Cancer Resource Center of Oakland. “We’ve all been aware for a long time of the higher incidence in Marin County, but this study points out that it’s really a Bay Area concern.”

In California, breast cancer is the most common type of cancer diagnosed in women — an average 26,300 new cases are diagnosed each year and account for 4,175 deaths annually.

While studying who is affected by breast cancer has great potential to help researchers understand the underlying causes, Roberts cautions that we should not jump to conclusions.

“The science is pretty clear that breast cancer comes from a mix of genetic and environmental and behavioral exposures, and that’s about all that it’s clear on,” he said. “We have no knowledge really of what that mix is.”

Roberts sees the mapping project as a starting point for further research — the geographical approach could be particularly useful in the search for possible environmental factors contributing to breast cancer development.

“There’s a really, really big caveat though,” Roberts said. “And that is that most scientists when they’re looking at environmental causes of breast cancer, they’re mostly interested in exposures that happened during puberty or in the child-bearing age.”

Still, Bay Area researchers will be taking a closer look at the environments where the high rates have been reported. Among them is Neena Murgai, an epidemiologist at the Alameda County Department of Public Health.

“It points toward looking at more factors in the social environment and in the health care system in the prevention efforts, as opposed to looking strictly at genetic factors,” Murgai said. “It clearly needs further investigation on the local level.”

Others, like Janice Barlow, say the new study calls for political action. Barlow, who is the executive director of Zero Breast Cancer in Marin County, has been at the forefront of the fight since 1994. She sees the potential for the new data to help mobilize people to demand answers.

“Just putting the information out I hope will activate people living in those communities to take that map and go to their supervisors or their public health department and say, ‘We want you to look into this. Why do we have a high incidence?’”

And whatever clues may be uncovered in other areas, she continued, will be in everyone’s best interest.