One stop for free food and medicine 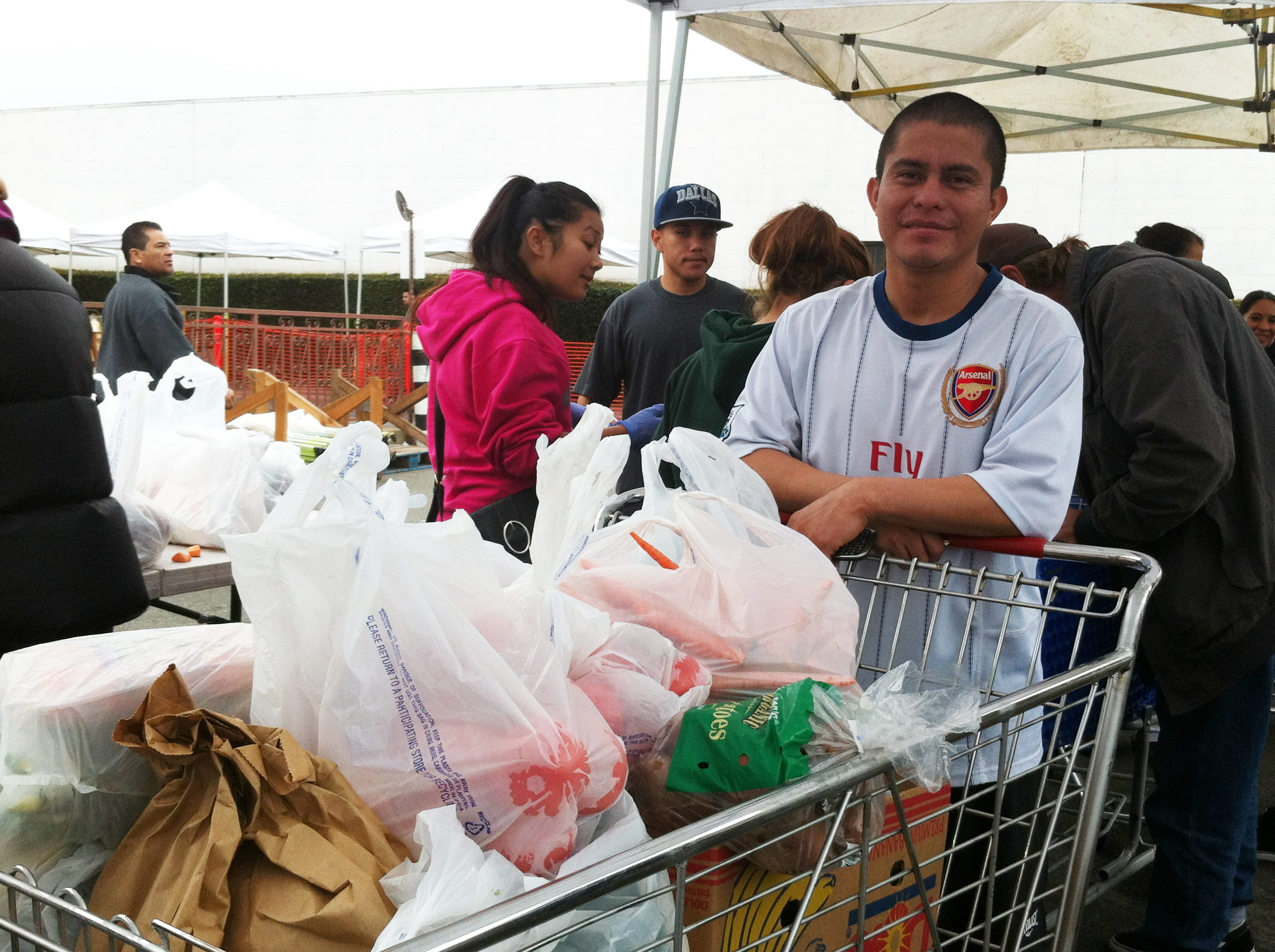 It’s early Saturday morning at Serve the People Community Health Center in Santa Ana, and dozens of people have crowded into the cheery waiting room to get their blood pressure or diabetes screenings, mammograms, or follow up appointments for a lingering illness. The clinic, which opened its doors in 2009, offers the gamut of clinic services to 500 patients a month — all for about $15 or less — and the staff regularly haggles with medical specialists for discount rates if the patient needs a referral. The health center’s doors are open to anyone who requires — but can’t afford — medical care.

But free, or low cost health-care services are just part of what this scrappy and dedicated health center does for the Orange County communities it serves. In the parking lot outside of the bustling clinic, things are also humming. Just after dawn, hundreds of people pushing shopping carts have already begun to roll though the line of the food pantry that Dr. Dimitri Sirakoff established in 2008 — before he opened, and became director, of the health clinic. The pantry, which has become a nutritional lifeline for the low-income, homeless, and unemployed residents of Orange County, draws 400 to 800 families two Saturdays a month.

From about 7 a.m. to 9:30 a.m., dozens of volunteers from churches and local colleges usher people under white tents set up in a sprawling parking lot and distribute grocery bags loaded with vegetables, seasonal fruits, and sometimes meats. The rows of huge wooden bins this Saturday in December contain tomatoes on the vine, orange juice, beans, carrots, apples, pasta, and bagels, English muffins, and hefty bags of empanadas. The bounty comes primarily from the Orange County Food Bank. The Food Pantry also receives donations from Trader Joes and Feed the Children, and they buy some food from Second Harvest with funds raised from foundations and local businesses.

“We are selective in what we take. I try to get some forms of protein and juices, something healthy,” said Dr. Sirakoff, who said he was morally compelled to start the food pantry after seeing in his own private medical practice the hunger and poor nutritional habits of local residents. In Santa Ana, a city of 330,000, 17.9 percent of people lived below the poverty level between 2006 and 2010, higher than the state’s average of 13.7 percent, according to the U.S. Census Bureau.

“It’s a safety net,” added Dr. Sirakoff, “Some people have said to me that without this food bank, they don’t know when their next meal will be.”

Across the parking lot, David Martinez, 62 and his wife Maria, 60, both in wheelchairs, zip over to a wall where they wait for their ride home. One of the volunteers follows behind them with a cart brimming with beans, lettuce, potatoes and squash. Maria smiles and says they are food pantry regulars.

“We are so happy they help us out with the food. The food is very good. We have different things every week,” she said. But she added that the other items they give away are valuable, too. The clinic dispenses free articles of clothing, including shoes, socks, baby food, diapers, and toiletries. David, who wears a breathing tube and has significant medical problems, said he picked up a jacket and a pair of shoes recently, items that he couldn’t afford on his fixed Social Security income.

Yvonne Martinez (no relation to David) and her 10-year-old boy, Walter Garcia, stood in the parking lot along with dozens of people waiting to be picked up or to board a free shuttle to their car. “Today is our lucky day,” said Martinez, who spotted the “Free Produce” sign in front of the clinic as she and Walter were riding by on the bus. The pair immediately jumped off at the next stop and took their place in the back of the growing line. Sifting through her packed grocery cart, the single mother on disability was thinking about what dishes she’ll make for her five kids. “It’s a blessing,” she said.

Eighteen-year-old Micaela Sotelo, a student at Santa Ana College, said doling out food is a gift to her as well. “It hit me personally because my dad hasn’t had a job in about nine months, but then a month ago he was able to get a new job,” she said, “Those times were tough…and it feels good to be helping others.”

Jhoanna Katindoy, 22, a volunteer and a nursing student at West Coast University in nearby Anaheim, said it was also worth waking up before dawn to promote healthy eating habits. “This is also primary disease prevention because eating healthy foods builds better immune system, which means less illness,” she said.

That connection between nutritious food and good health is what Dr. Sirakoff had in mind when he started offering quick, mini health screenings while people were standing in line. He’d check for high blood pressure, diabetes, and anemia and see if the people arriving at this doorstep had access to medical evaluation, diagnosis, and treatment. After receiving nearly universal negative response to that question for more than a year, Dr. Sirakoff decided to open Serve the People Community Health Center with a skeleton staff.

Recently, with the help of donations from businesses and foundations, Dr. Sirakoff was able to hire a new, professional crew — a physician’s assistant, patient navigator, and office manager. The clinic is working towards an ambitious goal of becoming a Patient Centered Medical Home.

California supports implementing models for more comprehensive and coordinated care for the state’s most vulnerable residents to help prepare for the increasing numbers of people who will have access to health care.

Winning the coveted PCMH certification requires clinics to use, for example, an advanced medical records system to keep track of the voluminous piles of essential information, from a patient’s demeanor to their diagnosis and treatment history.

Once certified, the clinic would be in line to receive more patients under the federal Affordable Care Act or health care reform.

The Coalition of Orange County Community Health Centers, a consortium of safety net providers, has singled out Serve the People Health Center as a clinic working to create quality healthcare for vulnerable, underserved communities.

Karen Greenwood of the Santa Ana-based Dhont Family Foundation agrees. The charity, which donates to local charities that serve disadvantaged people with great needs, gave the clinic its first grant of $60,000.

“It’s an affluent community, but behind the scenes there is a lot of poverty, particularly with the economic downturn,” she said. “We know [Dr. Sirakoff] is doing a great job at delivering the health care, but that’s just part of what he does…he doesn’t have a large staff and there’s not a lot of overhead.” (The clinic also runs a legal aid clinic where volunteer lawyers offer advice every other Saturday on everything from immigration to landlord/tenant disputes.)

The sense that the health center, which has an annual operating budget of $623,000, operates a lean, efficient enterprise seems to be spreading. The clinic’s overtures to donors and their bids for grants — which Dr. Sirakoff initially wrote himself with his bookkeeper — have been unusually successful of late. They recently received a $250,000 grant from the Children and Families Commission of Orange County to establish a pediatric dental clinic on site.

The bounty is a welcome gift for the holidays. When the expected 700 families roll their carts into the pre-Christmas food pantry on December 22, they’ll also find presents, courtesy of the California Highway Patrol’s Toys for Tots Program. Though they don’t have them yet, Serve the People’s volunteer organizers are banking that they’ll be able to dole out turkeys, too.

One stop for free food and medicine