Bridging the digital divide in the Central Valley 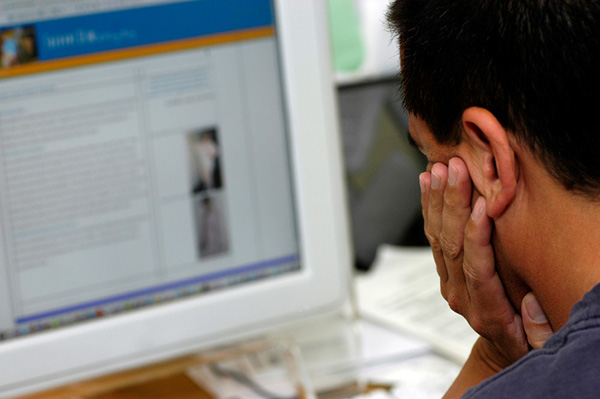 Central Valley residents are getting connected and learning to navigate a computer, thanks to California Connects, a program aimed at teaching vulnerable populations basic computer skills.

“I want to learn. We have a computer at home, but I don’t even know how to turn it on,” Ofelia Soto, 47 said in Spanish during a computer class at Garden Acres Community Center in Stockton, Calif., run by California Connects program.

California Connects aims to increase digital literacy and Internet usage through training, access and resources especially in the valley where there is a high concentration of barriers. The Foundation for California Community Colleges program is funded by the U.S. Department of Commerce’s National Telecommunications and Information Administration for Broadband Technology Opportunities Program.

A team of trainers, spread out in 18 counties across the valley floor and in the foothills, is recruiting people like Soto – those who have always had an interest in using a computer, but lacked basic skills because of language or income barriers.

In a recent class in Stockton, students finished a two-week core class on how to set up an email and conduct research on the internet. Advances in the internet, especially translation functions, mean they are better able to teach the courses in their student’s native language, said Stockton trainer Matt Jones. But there are still some frustrating barriers, he added.

“Practice is what a lot of people here need,” he said, adding that after a course ends many people tell him it went too fast. “I had a lot of students that I overwhelmed, so I tell them they can return if they bring a friend.”

Elba Wemiz is one of those people who say they need a lot of practice, so she scribbles Jones’ instructions in a composition book.

At 73, Wemiz is taking the step to learn how to use the computer so that she can be a more active participant in her church and better communicate with her family in the Bay Area. As the leader of a church group she is responsible for putting together a newsletter and sending out emails, but hasn’t been able to do it without the help of an assistant.

“I want to be more independent,” she said.

On this particular day she was browsing assisted living homes for her and her husband. Her new skills make searching for a new home and other daily tasks easier.

“The other day I called my bank to check my balance and they said ‘oh you can check your account online.’ For those of us who don’t know how it’s very detrimental,” she said.

Wemiz has a computer at home, as does Soto, but they’ve hardly ever used them, a common thread they are finding amongst students, California Connects staff said.

“They’ve been curious all along. They have asked their children but they (the kids) don’t have the patience for it,” Rosa Padilla, the Stanislaus County trainer, said. “A lot of times it’s the children that do them a disservice. They may tell them ‘don’t touch it you’ll break it,’ so when they hear about these classes they are very grateful.”

Broadband access is improving in the Latino population but there are still significant gaps, according to the Public Policy Institute of California’s 2012 report “California’s Digital Divide.” Since 2008, home broadband access among Latinos has increased significantly, from 34 to 58 percent.

The cost of broadband remains an issue for many of the 2,000 students who have graduated from California Connects. Soto, the Stockton student, said that at the moment only her husband is working, so they cut the internet and cable to save on costs.

“What we do is educate the students on the types of internet are out there how to subscribe and what some of the prices are, the places that are out there where you can use the computer and wi-fi spots for those with laptops,” said Desiree Cervantes-Holden, program manager for California Connects.

They also heavily publicize programs such as Comcast Essentials, which offer families Internet service for $10 a month if their child is on the free or reduced price school lunch, as well as the savings families can get on software like Microsoft Office if they have a student in the home.

Lack of literacy skills also interferes with the computer trainings.

“One trainer said the average level is 3rd – 4th grade. It is extremely hard to teach people these basic computer skills when they don’t have skills they need to know how to fill out a job application, participate meaningfully in their children’s school,” Cervantes-Holden said. “There isn’t much we can do except use visual cues.”

Rosa Padilla, the Stanislaus County trainer, said she can tell right away if a person cannot read or write.

“We are still in the generation where we have a lot of people who are from Mexico many of whom did not receive a proper education and focus more on earning an income,” she said. “But they are stubborn,” she added “and will usually come back until they have memorized some things.”

California Connects is one small component of a wider effort to increase digital literacy and broadband access in rural and heavily Latino areas of the valley.

Mike Dozier, executive director for the Community and Economic Development at Fresno State, is part of the San Joaquin Valley Regional Broadband Consortium whose goal is to encourage the expansion of broadband in places where there none particularly rural areas and those rural areas are predominantly Latinos.

“We have some disadvantage in terms of terrain. We are trying to get 95 percent of the valley by 2015,” he said. The consortium is trying to use mapping to get an accurate count but by his guess the valley is about 60 percent connected.

The terrain is proving to be a disadvantage for California Connects but not for the reasons they expected, it’s just very difficult to find Latinos in the foothill counties, according to Cervantes-Holden.

“One foothill county is about 8 percent Latino we are talking about a couple of hundred people spread out all through out the county,” she said. “One trainer in Calaveras (where the Latino population is 13 percent) spent has only trained about 30 people in one year that is how hard it is to find Latinos there.”

Cervantes-Holden, said those trainers have doubled up and taken on more English-speaking students who also need the training.

“Infrastructure and connectivity are being done, they are laying down the groundwork and want people to be prepared,” she said.

Dozier said the work of the CVNGBIP will help the consortium achieve their goal to have 95 percent of the valley connected. In an age where some say too much of our time is spent online Dozier said not being connected is keeping people and counties behind.

As part of the consortium Dozier is also tasked with a Rural Development Center where they offer technical assistance in digital literacy with an emphasis on learning English.

“If you don’t know these (basic digital literacy and English) you are not going to earn anything above minimum wage,” he said. “It’s for their economic future.”

Enrique Santillan, 63, hopes to use his continually improving computer skills to re-open his diesel equipment business, which he recently closed. After he split with his wife, who was also his secretary of 22 years, Santillan said he lost his connection to the technology world. His wife would email his family in Nicaragua for him and also run excel reports, things he never bothered to learn himself.

The most difficult part, Santillan said, was the progress he could have made had he known how to use a computer. He had thought about creating a web page for his business 12 years ago, but felt he was too busy. Opportunity passed him by. When he opens his business again, he is not going to make the same mistake.

The program started in 2011 and will wrap up in 2013. It has been a slow process, Cervantes-Holden said, but they have finally built some momentum.

Bridging the digital divide in the Central Valley