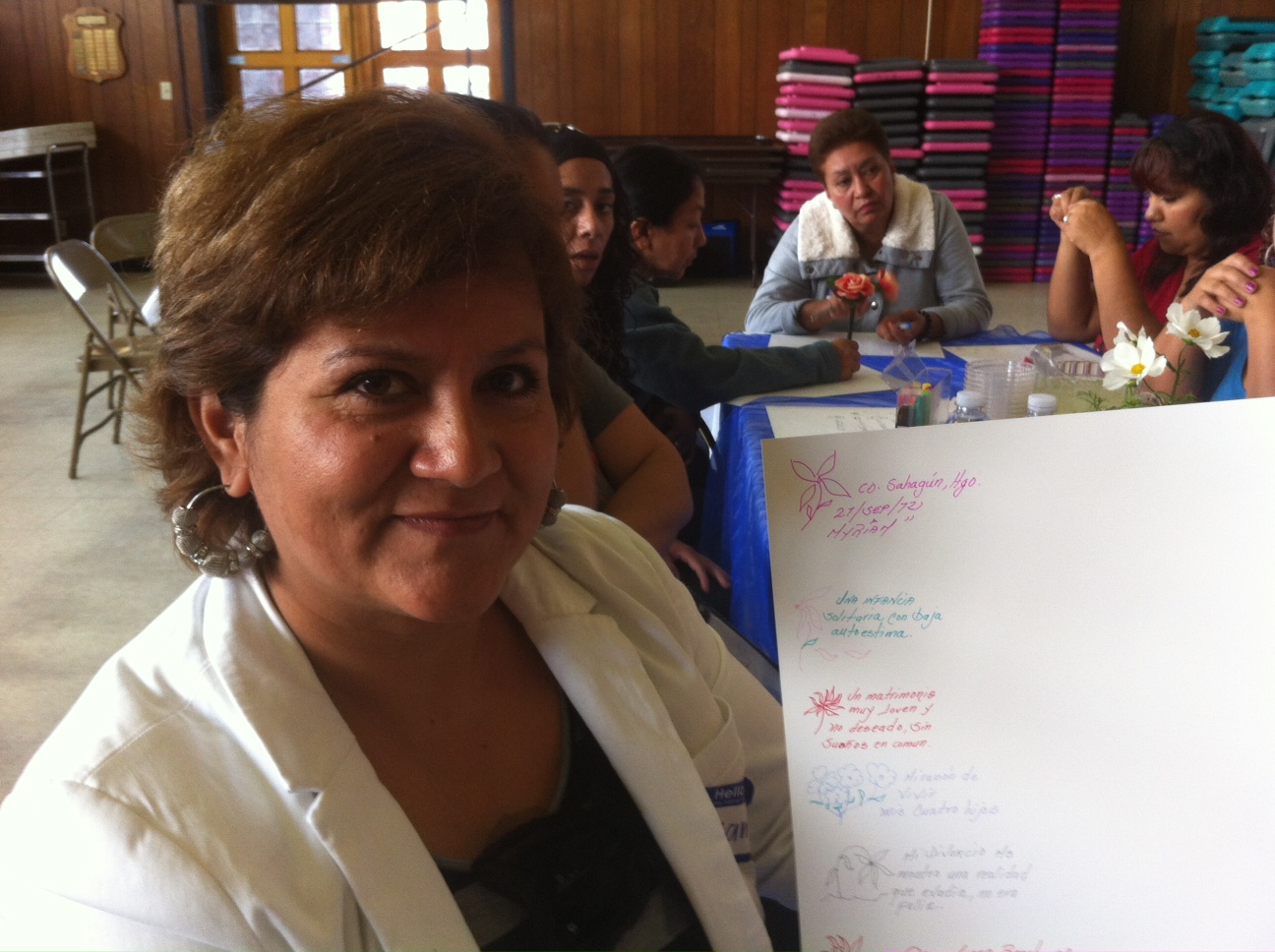 In a grand, light-filled meeting room of a Long Beach church one recent Saturday, nearly 100 Latina women sit at brightly decorated tables, drawing timelines of their lives. Colorful blue and red banners declaring Viva La Mujer, or “women live”— a familiar chant of empowerment — hang on the walls. Sitting at one of the tables, Myriam De Lucio is skillfully sketching her life’s milestones on a large white board. The Long Beach resident and mother of two draws her childhood home in Mexico and flowers, representing marriage and her children. Now divorced, De Lucio is sketching out a new chapter, one in which she is studying, working, and she says, “Reclaiming her dreams.”

This daylong event (complete with child care services and youth group workshops) is organized by the Community Partners Council, a group of Long Beach Latina women devoted to the health of their community and each other. The CPC’s ambitious mission is to stop domestic violence, provide access to legal and immigration services, promote affordable housing, and advocate for better air quality in underserved Long Beach neighborhoods.

More than 23 percent of Hispanic or Latina women have been domestic violence victims in their lifetime, one study found. Hispanic women were also significantly more likely to report that they were raped an intimate partner in their lifetime, according to a 2000 report by the National Institute of Justice and the Centers for Disease Control and Prevention.

The environment in Long Beach can also be hazardous to families. In Long Beach and neighboring cities around the Port of Long Beach, 21.9% of children suffer from asthma, compared to 15.6% in Los Angeles region and 14.2% in the U.S., according to the Long Beach Alliance for Children with Asthma. The high asthma rates are due, in part, to the constant stream of freeway exhaust and also diesel fumes which emanate from the nearby port.

The city ranks among the worst in air quality, according to the American Lung Association’s 2010 State of the Air Report. If dealing with air pollution and domestic violence weren’t challenging enough, the CPC members are also committed to reducing incidents of gang crime and drug use that have plagued their Long Beach neighborhoods.

“The goal is healthy families,” said Alicia Carrera, one of the organizers of the event and a CPC leader. “The goal is to have a place where children can play and we don’t have to worry about gangs or people selling drugs and women can make decisions about what they want in their lives.”

More than a decade old, CPC meets once a month and has many working groups, including one focusing on health and housing in which members learn about resources and strategize with other coalitions about how to implement policy changes. Members are familiar with existing resources, too, and have made referrals to women’s shelters and food pantries.

The CPC has forged good relationships with the Long Beach Police Department, and officers come to meetings to discuss the crime hotspots, and provide information about how individual incidents are being handled. CPC has also successfully partnered with local officials to keep Drake Park in Long Beach open in the evening so they could offer classes for youth. This year, CPC is a project coordinator for Summer Nights Lights, an initiative of Building Healthy Communities, which funds gang and violence prevention at three parks in Long Beach. For nine weeks this summer, starting in July, the grass fields and meeting rooms will be teaming with family friendly workshops on art, theater and karate. They’ll be healthy snacks for kids and Zumba classes for the moms.

In the afternoon at the CPC event, Laura Caporal, 27, a Zumba teacher, is about to step out on the dance floor to teach her fellow participants some moves before they go back to the tables and come up with new tactics to achieve their goals. About 20 women swivel and giggle in the center of the large hall as the rest cheer them on.

Caporal said she makes time in her schedule for Zumba class even though she is up at 4 am for work and has to take care of 3 kids on her own. She said exercise is one thing that women can do just for themselves — and that theme of justified self-indulgence is carried throughout the day. “You can talk, explain your sentiments and your problems here. It’s really good,” said Caporal. “I cried today. It’s difficult — this life.”

At the end of the day, an organizer leads the women in a chant in English and Spanish: “I’m extraordinary,” they shout. “Soy y tengo un voice, es extraordinary, es importante, es amiga!”

Marisol Barajas, a field representative for state assemblywoman Bonnie Lowenthal, has worked with CPC for years, and said what this group does is, in fact, extraordinary. She looks on with admiration as volunteers lift the sign “Viva la Mujer” down from the wall and pack up.

“Bringing women together and allowing them to share stories lets them feel less isolated,” Barajas said, “and that they are part of something bigger.”