How clean is your air? 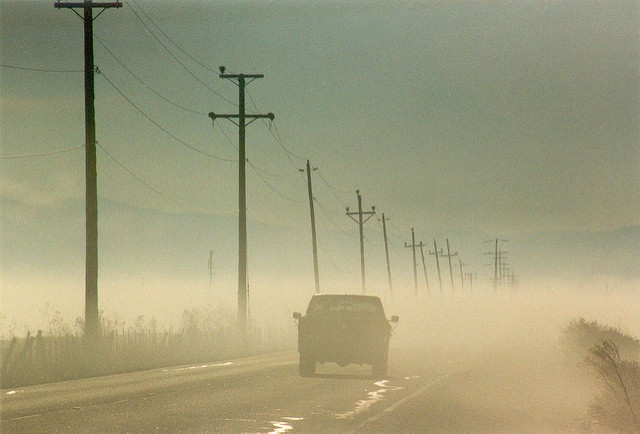 The numbers come from a recent report by the American Lung Association, which publishes the rankings to highlight the connection between air quality and health.

“We are trying to remind the public that this remains a serious problem,” said Bonnie Holmes-Gen, executive director for Air Quality for the Lung Association.

The communities with the cleanest air are generally along the coast, where offshore breezes push pollutants inland. Salinas and Monterey, for example, posted one poor ozone day in three years, while San Bernardino had more than 100 days a year every year for three years. On these “Spare the Air” days, some counties issue warnings to residents not to engage in exercise outdoors, request that homeowners refrain from using fireplaces and suggest that residents do what they can by using alternative methods of traveling such as public transportation or bicycling.

“Ozone and particle pollution contribute to thousands of hospitalizations, emergency room visits and deaths every year,” said Kari Nadeau, a professor of immunology and allergy at Stanford Medical School and an ALA researcher. “Air pollution can stunt the lung development of children, and cause health emergencies, especially for people suffering from chronic lung disease including asthma, chronic bronchitis and emphysema. Both long-term and short-term exposure can result in serious health impacts.”

Added Holmes-Gen: “We really want all the areas to be as clean as the coastal areas.”

The president and CEO of ALA in California also reiterated that more progress needs to be made statewide.

“This report shows that air pollution remains a serious health threat to too many Californians,” said Jane Warner, president and CEO of ALA in California. “State of the Air 2012 shows that we’re making real and steady progress in the fight for clean air, but unhealthy levels of air pollution still exist, putting the health of millions of Californians at risk.”

For regions that have lowered their ozone pollution, it can be attributed to the policies of the California Air Resources Board, which has updated regulations for cars, fuels and diesel emissions.

“Our leaders have adopted strong air pollution laws that have lowered pollution from vehicles – dirty buses and trucks – to cleaner vehicles,” she said. “It shows how important the laws have been in reducing pollution and making it a healthier place.”

Holmes-Gen said an estimated 9,000 people die prematurely in California each year due to air pollution, generally those with asthma or other lung illnesses.

Particle pollution includes small bits of matter in the air that can be breathed into the body from such sources as heavy trucks and agricultural equipment that use diesel fuel and wood fires, either from controlled burns in rural areas that clear out brush or from home fireplaces.

“Agricultural vehicles and equipment are often diesel vehicles,” Holmes-Gen said. “They are used to carry agricultural products on and off farms.”

She said irrigation pumps can also be an issue.

Homeowners can also help with lowering the particle pollution.

The Monterey Bay Unified Air Pollution District in 2011 offered an incentive program for homeowners to upgrade their wood stoves with an Environmental Program Agency-certified stove or fireplace.

Holmes-Gen said the number of hybrid vehicles and zero emission vehicles is having an impact on the state as a whole, but Salinas benefits from a natural resource that keeps the air cleaner than other parts of the state as well.

Holmes-Gen said part of what keeps the air in the Salinas area so pristine is that it gets coastal breezes that disperse any particles across the sea. Most of the ozone pollution (smog) in the Monterey and Salinas areas comes from the Bay Area to the north, which is much more highly populated.

“It hasn’t amounted to much,” Holmes-Gen said. “But we always try to emphasize that it is a statewide issue.”

How clean is your air?