Community comes together for troubled youth 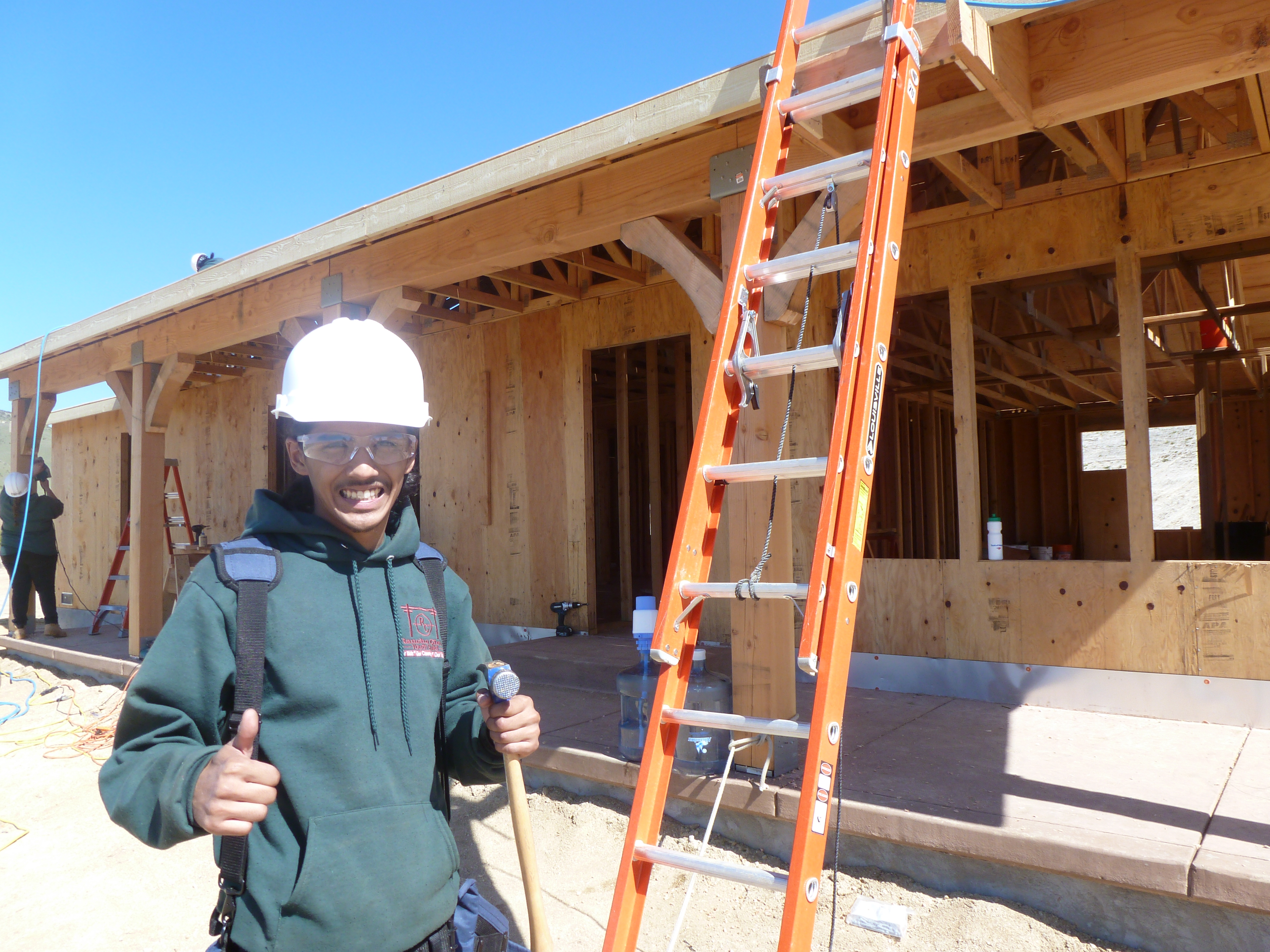 On a 100-acre ranch in the foothills northeast of Salinas, 28 students, many of whom are on probation, are building a house. When it’s finished, it will shelter some of them from the violence in their own neighborhoods.

This Youth Build project is one of the first steps in an extensive expansion of Rancho Cielo Youth Campus in Salinas. The nonprofit provides young people who are on probation, parole or are at risk of gang affiliation a chance to earn a high school diploma, get job training and a healthy dose of self esteem.

“A lot of these kids have been told they’re no good, but a lot of them are blossoming,” said Andrew Seminerio, an instructor and licensed contractor who teaches homebuilding and other construction at Rancho Cielo.

With county planning approvals in hand, this successful community endeavor plans to break ground next year on the next phase of a major master plan that includes a 27,000 square-foot agricultural vocational center, four more transitional houses and more class rooms and recreational fields. The nonprofit plans to launch a $5 million capital campaign to help fund the growth next year, said Susie Brusa, executive director of Rancho Cielo.

The new agricultural center will be called the Ted Taylor Vocational Center and will include four wings for agricultural fabrication and welding, diesel and tractor mechanics, the mechanization and repair of a packaged food plant, and sustainable construction, Brusa said.

Joanne Taylor Johnson and her family are major contributors to that center. Joanne and her late husband, Ted Taylor, are the parents of Bruce Taylor, who founded Salinas-based Taylor Farms, which is also a major donor.

Currently Rancho Cielo is a complex blend of alternative high schools and vocational training centers with a construction program, an onsite culinary academy complete with a restaurant, and recreational facilities for students and the community.

That’s a far cry from 2003 when retired Superior Court Judge John M. Phillips convinced the County of Monterey to lease him the run-down property, formerly the Natividad Boys Ranch.

“I was on the bench 21 years and it was my job to send these young kids, 17, 18, 19, 20 to prison for life. You were kind of discarding a life…they didn’t really have a chance,” said Phillips, who is president of Rancho Cielo’s board of directors.

He envisioned an alternative high school and vocational center, but the county said it would cost $22 million to open and couldn’t fund it. That’s when Phillips decided to “get government out of the way and engage the business community.”

Engaged they are. Dozens of businesses from construction and agricultural companies to restaurants and car dealerships have stepped up to serve on the board and fund the operation. They did it with $3 million and a whole lot of in-kind work.

“What you see on that hill is a community coming together,” said John Narigi, vice president and general manager of Monterey Plaza Hotel and Spa and a Rancho Cielo board member. Every January the Plaza Hotel holds a fundraiser for Rancho Cielo. This year the event netted $130,000.

Youth Build, the program building the transitional houses, is the newest addition at Rancho Cielo. It started with 28 students in September. The United States Department of Labor gave Rancho Cielo a $1.1 million grant to partially fund the construction of five transitional living houses over 2.75 years. Rancho Cielo is matching that amount.

Students spend half their time working on their high school diplomas with the onsite John Muir Charter School and half their time with a licensed general contractor instructor, learning the trade, earning a nationally-recognized construction certificate and getting paid to build transitional housing at the Ranch. Five houses will be built and rented, on a sliding scale, to Rancho Cielo youth aged 18-24, who are unsafe in their own neighborhoods.
.
“You get people who are doing well up here and they go home and get shot,” Seminerio said.

Kevin Onate is 19 is one of the crew members constructing the house. He’s been on probation twice and was arrested for armed robbery. He was skeptical about Rancho Cielo at first.

“The next thing I know, I didn’t want to leave,” he said. Now he has his eye on learning small engine repair or becoming an electrician.

“These kids are very receptive, they’re not losers,” Phillips said. “You put them up here in a safe place that’s full of positive energy and people who believe in them and you see them change in a matter of three or four months.”

“I come here every day, I haven’t missed a day, even when I was sick,” he said.

While Gaxiola has managed to stay out of trouble, he is surrounded by people who haven’t.

“My dad used to be a criminal. Half my family is in prison. All I want is to have a good job, a car, a roof over my head, maybe enough for a little family,” he said. Gaxiola wants to go to college, and maybe work in law enforcement.

Youth in Monterey County are more at risk of gang violence than anywhere else in the state. The county has the highest youth homicide rate in California, three times the state average, reports the Violence Policy Center, using the most recent available figures from 2010. Just getting safely to and from school every day can be challenging for some.

“I don’t think the public gets that some of these kids have to show a strength of character that you and I will never have to show,” Brusa said.

Rancho Cielo also has a Youth Corps program for 18-24 year-olds, most of whom are on probation or parole. They learn to construct furniture, sidewalks, decks and other projects. After proving themselves on campus, they qualify to work for Rancho Cielo doing paid jobs in the community.

This year the Corps has a $100,000 contract with the City of Salinas for rebuilding sidewalks. The program has a business plan for becoming self sustaining through earned income in three years.

Rancho Cielo continues to add programs that inspire youth to make better lives for themselves. Last year was the first year of Rancho Cielo’s Drummond Culinary Academy with 24 students, aged 16 to 24, who had dropped out of high school. Some of them were on probation.

They worked on getting their high school diplomas through John Muir Charter School and spent half their time in the new commercial kitchen with Executive Chef Marcus Whisenant. They earned a basic culinary certificate and some earned a National Restaurant Association certificate. On Friday nights they put those skills to work serving dinner in the onsite restaurant for special events and the general public.

“I started as a dishwasher,” Whisenant said. “These guys will be able to bypass a little bit of that,”.

Students work 200 hours in local restaurants before they graduate and now almost every member of the 2011 class is either working or in school.

Silver Star, another alternative high school with services, was the first program at Rancho Cielo. This year 54 students, 90 percent of whom are on probation, are working towards their high school diplomas. Along with the basic academics they are getting lots of art, music, and drawing as well as learning to camp, rock climb, fish, garden, play guitar and chess.

The recipe is working. In fiscal year 2010/2011, 70 percent of those who completed the Silver Star program did not reoffended within a year. Only 36 percent of similar youth who did not attend Rancho Cielo did not reoffend within a year of their first offence, said Marie Glavin, managing partner of Renaissance Resources West, a consulting company contracted by the Monterey County Probation Department.

If you include all of the programs at Rancho Cielo, 80 percent of students do not reoffend after a year, Brusa said.

In addition to giving youth the tools for creating a healthier path for themselves, the cost of this approach is much less than incarceration. Educating a student at Rancho Cielo costs $8,000 to $9,000 a year, but incarcerating them in county facilities costs $70,000 to $80,000, Phillips said.

Phillips still volunteers every day at the Ranch. Brusa and other campus advocates say he drives the growth there. He gets things done.

“It’s really been a gift for me,” he said. “To take 100 acres, bring in the community and turn lives around, it’s been a great ride.”

Community comes together for troubled youth