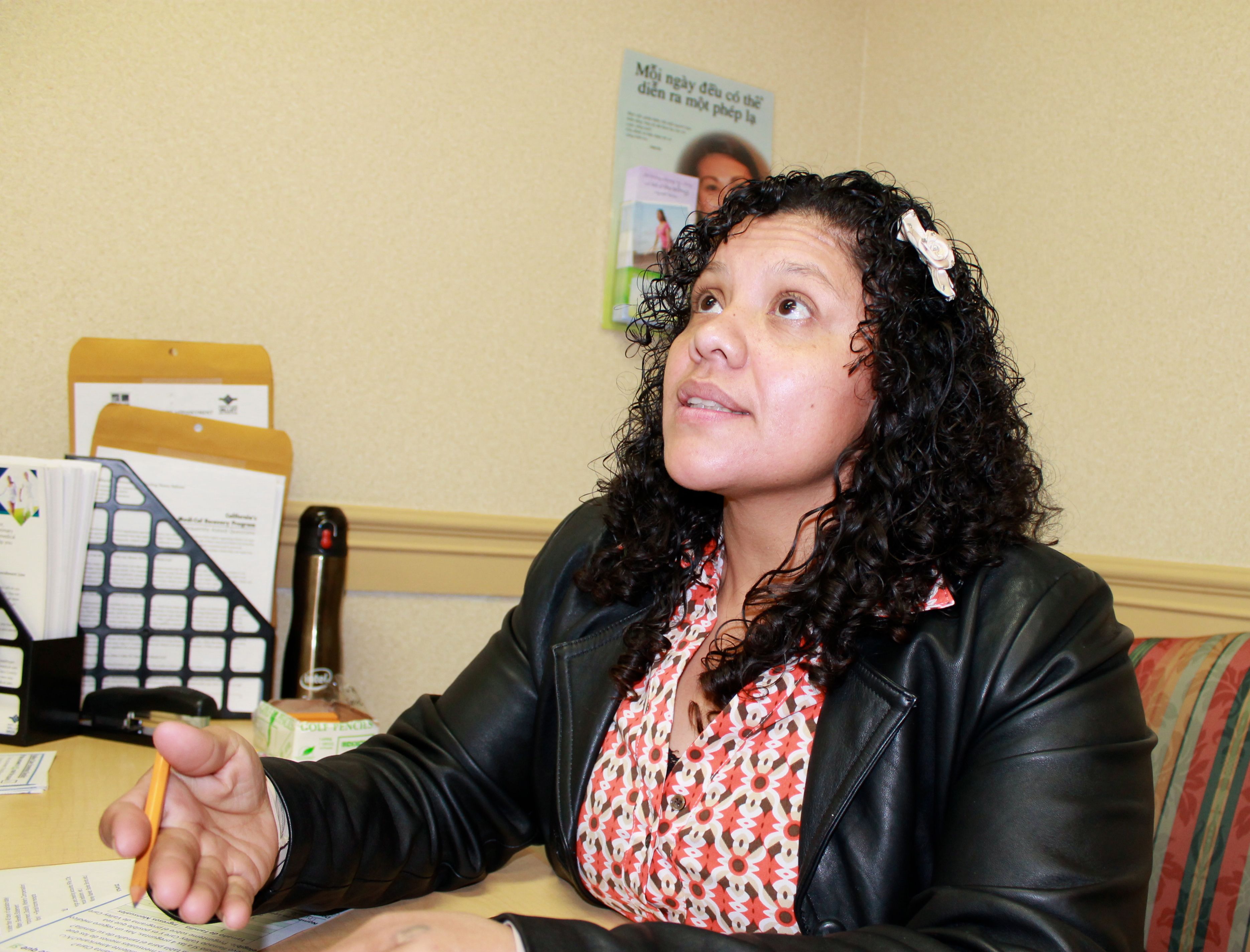 Veronica Villalobos works a desk in a crowded waiting room at St. James Health Center in San Jose. She’s looking for those whose low income — less than $699 per month for a single person — might qualify them for free medical care.

The patients she seeks are not here for regular checkups. They earn less than 75 percent of the federal poverty line, and come to the Julian Street center because they can pay for care on a sliding scale. Some are so poor they hardly pay at all. Most waited until they were desperately sick to make an appointment.

Villalobos wants to find those patients and change that pattern. Her job as patient navigator, which started March 1, is to sign them up with Valley Care—Santa Clara County’s newest program providing health insurance for the very poor.

The county’s first target? Patients with little money who don’t qualify for other public health programs. By county estimates, that includes about 23,500 residents.

Often, Villalobos said, those people are single adults or couples without children. They also are teenagers from low-income families who have grown too old to be covered on their families’ public plans.

“I want to make sure they leave happy,” Villalobos said. “There are services for them.”

Those signing up for Valley Care will move into Medicaid in 2014, when that program expands as part of federal health care reform, Carta said. Medicaid is a federal program run by the states to provide medical insurance for low-income U.S. citizens and legal permanent residents. Then, the federal government will pay 90 percent of the medical costs. The county will pick up the last 10 percent.

“Valley Care is the transition, the bridge to 2014,” Carta said.

Villalobos’ work is partially funded by a $120,000 grant from the Blue Shield of California Foundation to reach out to community clinic patients. Often the patients that visit the county’s community clinics are those county doesn’t reach through traditional means. Many do not speak English, or they live in an immigrant community that is not familiar with how local government works.

If those residents do visit county offices, “the person behind the counter doesn’t necessarily speak my primary language. Misunderstandings could occur. I may not understand at all,” said Grace-Sonia Melanio, director of health policy and communications for Community Health Partnership. The partnership is a nonprofit that advocates for affordable medical care in Santa Clara and San Mateo counties, and represents health clinics in the South Bay and on the San Francisco Peninsula.

“Our patient navigators speak the language of the patient in the waiting room. They have a customer service frame of mind, so their goal is to have a complete application and to make sure that the patient succeeds in getting health coverage if indeed they are eligible,” Melanio said.

That’s where Villalobos steps in.

Sitting at her desk in the corner of the waiting room, Villalobos is a soft but commanding presence. She wears a patterned shirt with her curly black hair clipped into barrettes. She talks comfortably with patients in Spanish and English, asking them if they have insurance. If not, she hands them a form with a few questions to see if they might qualify for Valley Care.

About 45 percent of patients at community clinics don’t carry health insurance. Villalobos said she speaks with about 100 people per week, of which about 20 might qualify for Valley Care.

On a recent morning, one of those patients was Linda Fraasch, 63, of San Jose.

A former tech worker who lost her job in the recent economic downturn, Fraasch was at the clinic to deal with her Type II diabetes, she said. She pays about $200 out-of-pocket each month for her eight prescriptions, but hasn’t purchased blood sugar test strips for two years: “It’s either my test strips or I buy all my medications,” she said.

Fraasch is like many who Villalobos signs up—single adults with no children who do not qualify for other public medical plans. This was the first she said she had heard of Valley Care. However, she said, she makes slightly more than the $699-per-month qualifying amount for a single person.

Villalobos said patients like Fraasch could qualify for Medicaid in 2014, when the expansion will cover residents whose incomes hit 133 percent of the poverty line. Meanwhile, she hopes they will tell their friends about the program. Instead of seeking out patients, she said, she wants them to come to her.

Instead of scheduling individual appointments, Carta said demand is growing to the point where the county now holds 30-person sessions with a financial counselor to help interested residents sign up. The goal is to register 12,000 residents in Valley Care by June 30.

“We’re doing four of these group screening sessions a day this week. Next week that should go up to 7 per day. In a month we hope to get to 15 a day,” Carta said. Classes are held in English, Spanish and Vietnamese.

Carta said one of the biggest challenges is helping residents track down and remember all of the documents they need to sign up. For example, not everyone has a drivers’ license or another government-issued photo ID. Homeless applicants often have problems proving they reside in Santa Clara County.

Then there is everyday forgetfulness — residents might not remember to bring a paycheck stub or other required document, she said.

“If they came on a bus, they can’t just jump in the car and go back and get it,” Carta said.

With the U.S. Supreme Court considering the legality of health care reform, Carta said she’s trying not to worry about what their decision might bring.

Regardless of what justices rule, Valley Care would probably not be immediately affected, Carta said. But the 2014 Medicaid expansion could be. Carta said her staff will wait to see how things pan out before making any changes. That decision is expected in June.

Note: This story has been corrected. An earlier version stated that Santa Clara County sought to enroll 20,000 people in their plan by June 30. They are seeking to enroll 12,000 people by June 30.