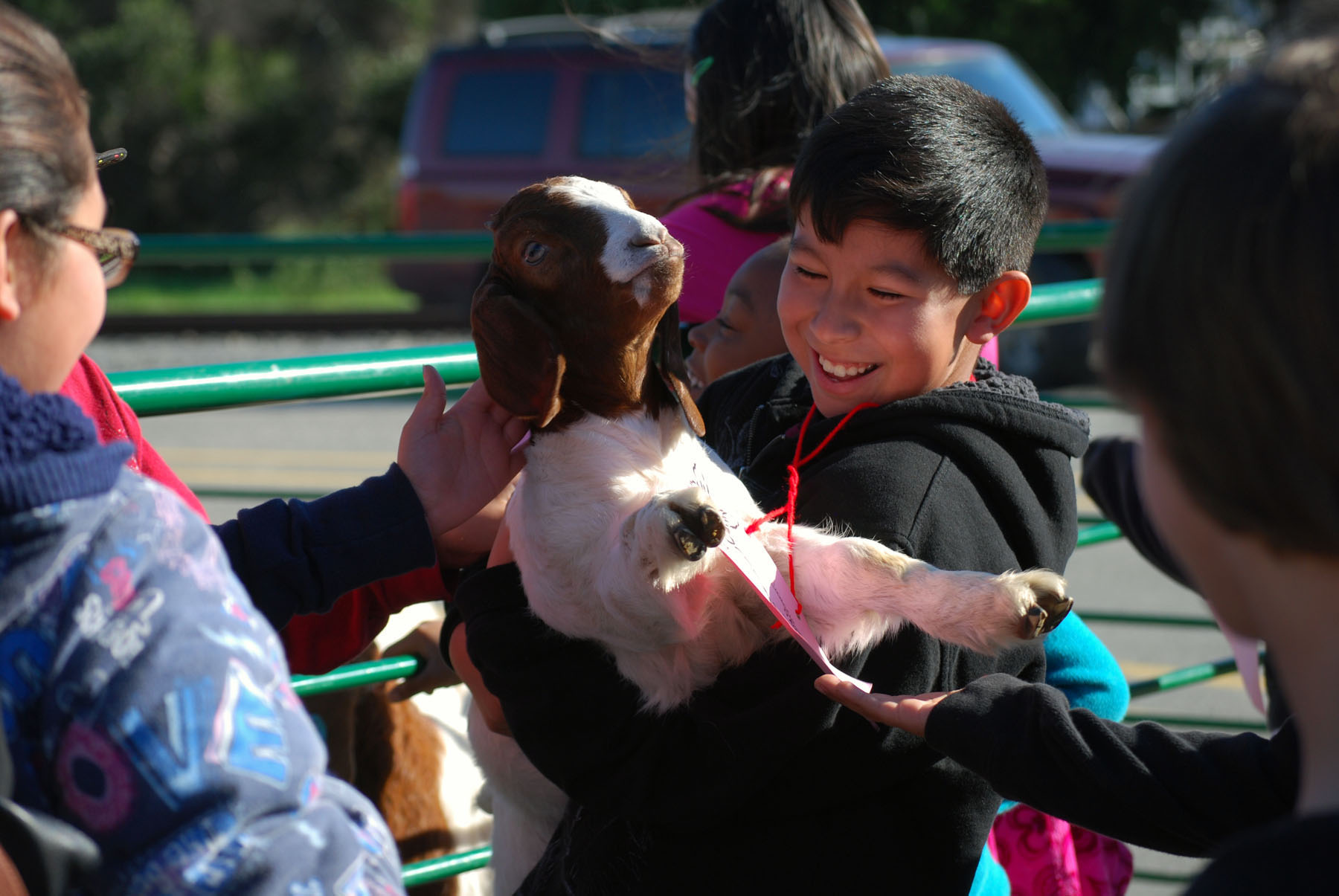 The Salinas Valley is in the heart of California’s central coast farmland, and once a year, local third-grade students get a chance to learn about the industry that drives the region.

Monterey County Ag Education Inc, a nonprofit, hosted its annual Salinas-area Farm Day earlier this month. The nonprofit raises money to provide transportation to any school that wants to attend, provides a curriculum for teachers to use in the classroom and brings together more than 700 volunteers – many who work in agricultural businesses – to teach kids about everything farm related.

The group hosts three Farm Days a year for Monterey County students, one in Monterey, one in King City, and the most recent event in Salinas.

“We’ve been doing this for more than 20 years,” said April Mackie, a board member for Ag Education. “We are the biggest (Farm Day) in the U.S. as far as we know.”

The Salinas event, held at Grower’s Cooling, a stretch of cold storage and packaging warehouses in south Salinas, was teeming with students, teachers and chaperones on the Thursday morning of the event. The board members estimate that 7,800 students were in attendance with 1,500 adults and teachers.

The recent event included too many booths and demonstrations for every class to get to during the four-hour event. Mackie said that the organizers have a volunteer leading the groups around to make sure that the kids visit each of the areas of interest, including food safety, plant doctoring, healthy eating and farm animals.

Mackie said the farm animals are often the biggest draw, so many of these had a scheduled demonstration time to make sure the students also spent time visiting the other booths.

Martha Suess, a teacher at Lagunita School in north Salinas, said the animals are always a favorite.

“They love to see all the different animals,” she said. “They had alpacas here last year. And they like the sheep dog.”

Her students were gathered around a booth for Champions For Change. The agency is part of the state’s public health department and promotes healthy eating. A volunteer quizzed the kids about the health benefits of different fruits and vegetables.

“Which of these items has as much calcium as milk?” he asked, naming off broccoli, carrots and an orange.

The kids all guessed broccoli with a little hint from him. The students took away a Sesame Street book on healthy eating and a recipe book.

“They get excited to see the lettuce and talk about the broccoli,” Suess said. “These are good talking points.”

Mackie said healthy eating is one of the points volunteers try to get across during the Farm Day activities.

At another booth, a classroom gathered around a table that was full of canned and fresh produce – some common and some a little less well-known. The volunteers held up different vegetables and asked the kids if they knew what the items were. The kids raised their hands and shouted out the names of the items – butternut squash, spinach and beets. The volunteers showed how some vegetables come fresh or in a can, such as the beets.

At one of the demonstrations outside the cooling warehouses, two classes at a time learned about dairy cows. A dairy cow named Gettie sat inside a trailer, labeled the Mobile Dairy Classroom, while a dairy calf was tied up in back. Jeff Byers led the presentation, developed by the Dairy Council of California.

“We have a cow and guess what?” Byers said to the group of third-graders. “She’s your neighbor. She lives in Moss Landing (in Santa Cruz County) at Moon Glow Dairy. All the cows at the dairy have a job and that’s to make milk. They do a real good job of it.”

Byers talked to the children about a healthy diet including fruits, vegetables, whole grains, and of course, dairy products.

“You have milk to drink,” he said, “Yogurt to eat, and butter to put on your toast. You get lots of calcium that gets into your body and it’s what your body uses to make strong bones and strong teeth.”

Byers demonstrated how a cow can be milked by hand – and squirted fresh milk in the direction of the kids in the front row. They giggled as it came at them. He had a volunteer bring the calf front and center, showing that the calf will drink out of a bottle just as she drinks milk from her mother. One student had a chance to hold the bottle up for the calf, Ella. Byers instructed her to walk backwards, and as she did, the calf followed her.

“She’ll follow you anywhere as long as you have her bottle,” he said.

At the end of the presentation, the students were allowed to line up to pet the calf. The kids smiled and laughed as they reached the front of the line, petting the calf on the head.

Near the mobile dairy demonstration, one booth was set up to teach kids about organic growing techniques. The volunteer explained that organic foods are more expensive because the fertilizers used are more expensive and less produce is grown with it. At another booth, hosted by Tanimura and Antle, a grower/shipper of produce, volunteers showed students how different seedlings look from the plant they grow into. They showed seedlings for celery and cauliflower.

“It takes 126 days to harvest,” the volunteer said of the cauliflower.

Mackie said the goal of farm day is to show the kids where much of the food they eat originates.

“The biggest benefit is they actual see the people behind the food they eat,” she said. “It’s not just going to the grocery store for milk. They have most of these commodities (produced) in their backyard.”