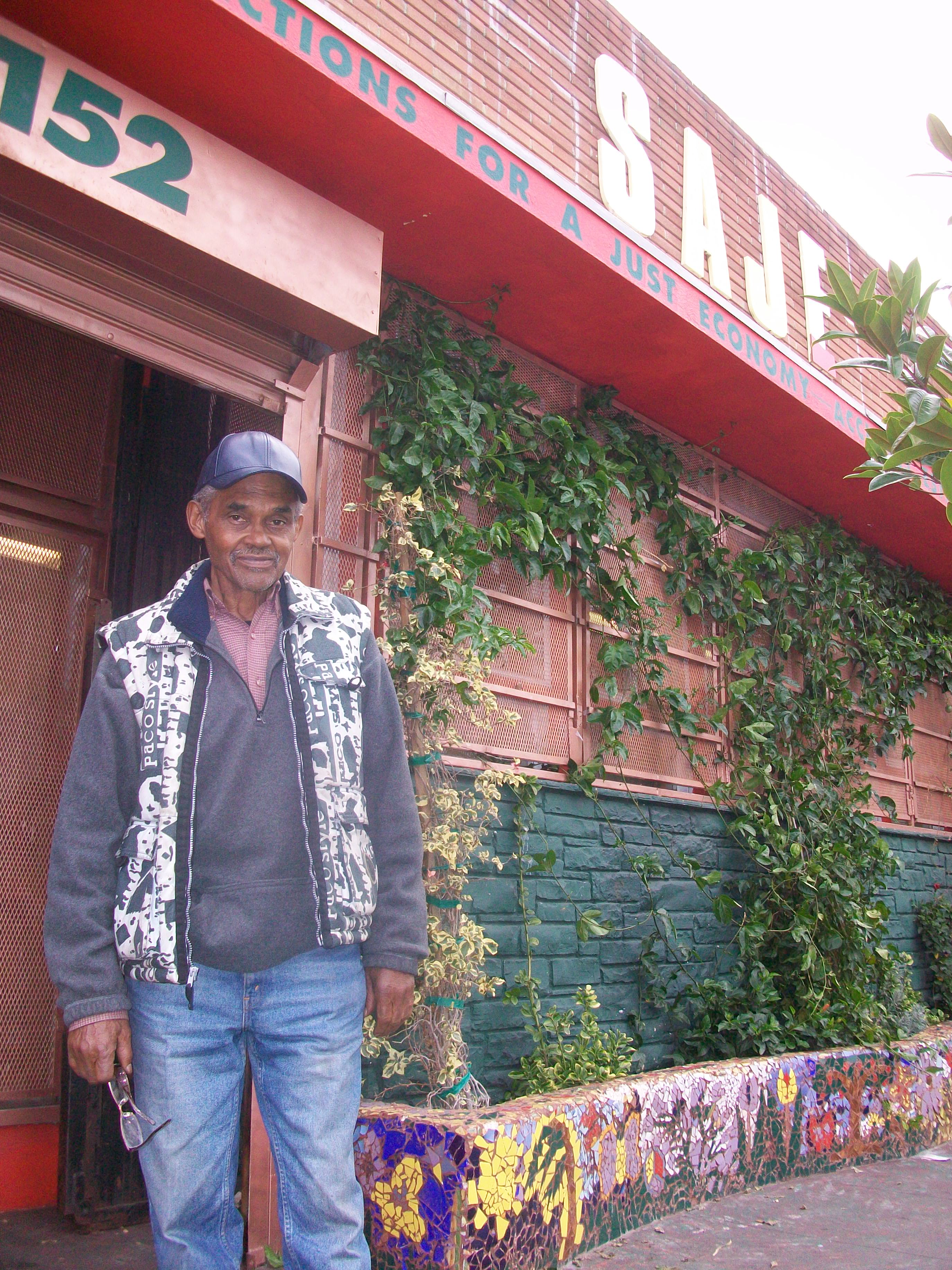 Outside of the house in South Los Angeles where retired veteran Willie Hill has lived for more than a year hangs a sign: “This Property Closed to the Public.”

Hill’s rented home, which he shares with three others on tree-lined Menlo Avenue, just north of the University of Southern California campus, has been condemned.

Yet Hill, 72, and his housemates refuse to leave despite poor living conditions such as no running water, heat or electricity. If they vacate, they risk losing their tenant rights. Plus, Hill doesn’t know where he would go.

Contrasting Hill’s situation is a sign hanging from another house across the street from where he lives. This one advertises a USC rental housing street fair at the end of January.

In Hill’s neighborhood, much of the housing is now occupied by students and others affiliated with USC. Property gets sold to a developer, who clears out the house, renovates, and rents it to Trojan students and faculty who can afford higher rents than those paid by working-class Angelenos. One way to force residents out is by making the domicile so unbearable, the tenants leave.

“Gentrification in this neighborhood remains extreme,” said Nancy Ibrahim, executive director at Esperanza Community Housing. “This is one of the hottest neighborhoods in the city.”

Hill’s experience is not unique. Three years ago, Gloria Serrano, who has lived in South LA for 40 years, and other families were evicted from a building on West 23rd Street, a few blocks north of USC. Now Serrano’s old building, like many around it, is decorated with for rent and for lease signs.

A website featuring her former home boasts of a “well-maintained, gated-building” with “perfectly appointed” kitchens and a five minute walk to USC.

Organizations such as Strategic Actions for a Just Economy (SAJE) have worked with Hill and Serrano in helping them understand their rights, while groups like Esperanza try to maintain affordable housing in the neighborhood.

“USC created this intense competition for housing in the area,” explained David Robinson, Political Director at SAJE and director of United Neighbors in Defense Against Displacement, or UNIDAD.

“The gentrification continues apace,” he added.

But the displacement and gentrification around USC isn’t a clear-cut case of a monolithic entity kicking folks out of their homes and onto the street to make way for expansion. Many of the cases such as Hill’s, Serrano’s and others are the result of private property owners not affiliated with USC taking advantage of the land’s proximity to the campus.

“When we talk about the displacement issue, the challenge is that the university did not come in and remove people from their homes,” said David Galaviz, Executive Director of Local Government Relations at USC. “It wasn’t the university doing that. It wasn’t anybody acting in an official capacity on behalf of the university.”

USC is currently ramping up a major redevelopment of its University Village, which calls for new on-campus housing, academic buildings and retail. According to the university, the project will be built on land already owned by USC.

A highlight of the plan is the construction of 5,200 new student beds, a net creation of 4,000 beds. Galaviz stresses that creating more on-campus housing will alleviate the demand for such housing away from campus.

“The specific plan in a lot of ways is the university’s reaction to the displacement issue,” Galaviz said. “It’s an opportunity to really relieve pressure on the surrounding residential community.” He added that the university is looking into a program that can reconvert housing that was converted from residential to student housing.

The new Village, which now includes a dated Denny’s, Starbucks and movie theater, will boast new retail, restaurants and at least one grocery store. Galaviz envisions something more akin to a town square that can be enjoyed by USC’s family and families in the community at large. Galaviz stressed that the university needs the greater community to compliment the transient student population.

“The last thing we want to do is have those folks have to leave the area,” he said. “That’s not the intention.”

Galaviz also cites the 12,000 jobs – 4,000 permanent, 8,000 construction-related – promised by the Village and other campus redevelopment areas. The university has established a local hiring program to assist in directing those jobs to zip codes impacted by USC.

Ibrahim wants the university to be more active in working with the community to avoid or assist with situations such as Hill’s and Serrano’s. For example, she would like to see the university contribute to a revolving loan fund to help affordable housing developers.

“One of the things that we’re very concerned with as we try to partner with the university is that they understand and take some kind of responsibility,” Ibrahim said.

And for all the talk of USC creating new jobs, transferring more students to on-campus housing and the promised economic activity and new retail the redevelopment will bring, it won’t do any good for those such as Serrano, Hill, and others displaced who can no longer afford to live in the neighborhood.

“It’s great they’re bringing things to the community, but not at the price of displacement, and families need to be able to stay here and benefit,” said Serrano, who has since moved in with her daughter on 120th Street, about nine miles to the south. She has also joined SAJE as an organizer.

Hill’s future is to be determined. He’s still in his condemned house, the one with a USC shuttle stop across the street.

“As long as they can make it affordable for everybody,” Hill said of development “I don’t think it should be a situation where it’s catering to people with money, a certain class. This is what the problem is.”

Robert Fulton is a correspondent for the California Health Report at www.calhealthreport.org.