After high profile crimes, residents reluctant to talk to police 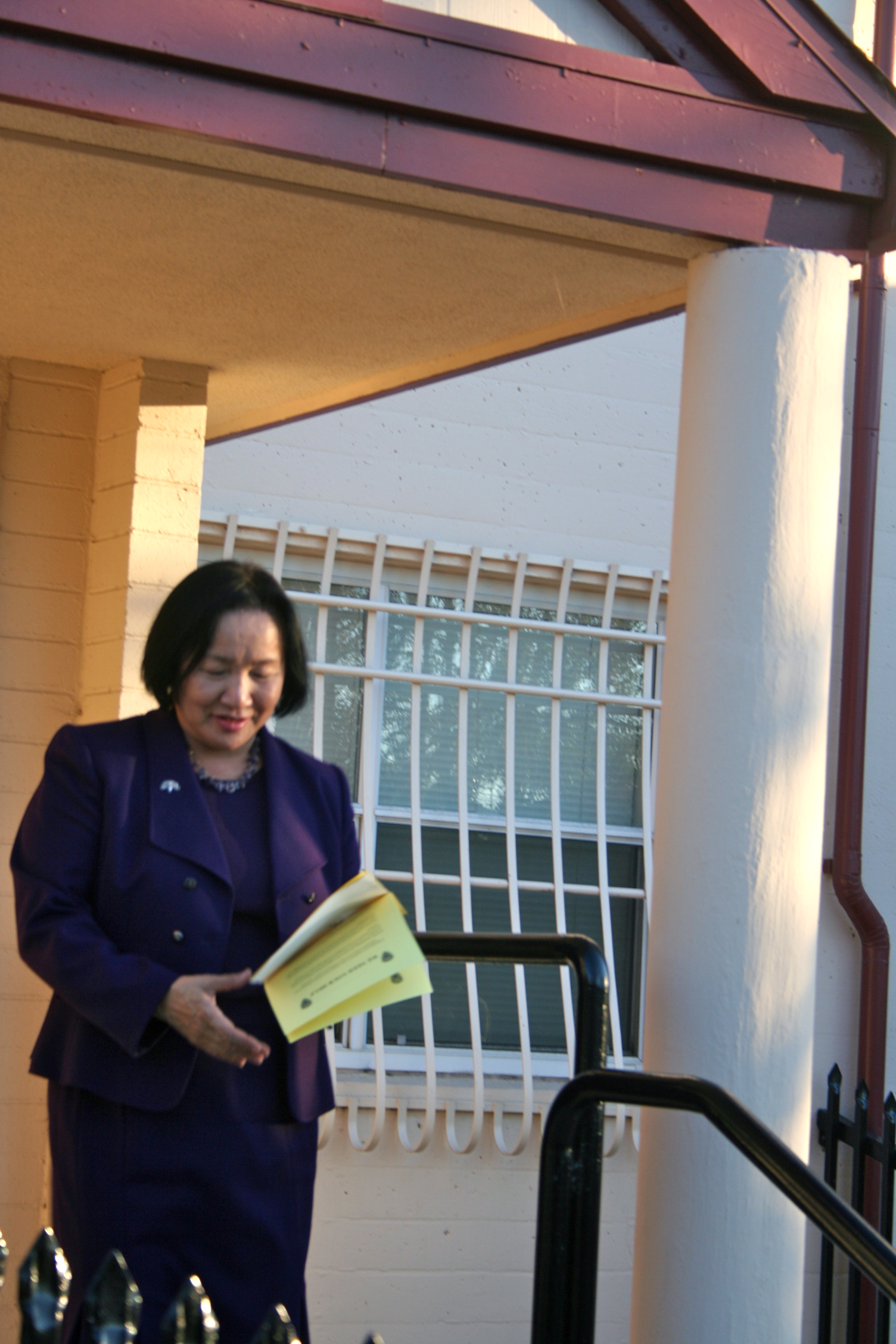 Mayor Jean Quan walked purposefully from door to door in a West Oakland neighborhood on a Friday afternoon in early December. A mass shooting, just blocks from where Quan was canvassing, had recently shocked the city. Seven people were injured, including a critically wounded one-year-old boy.

When Quan’s knock was answered, she talked with residents and asked for their help with the case. When no one came to the door, she left a flyer with the number of a dedicated tip line curled into railings or screen door handles.

Some people stopped to talk to Quan on the street. One question was on everyone’s mind.

“Did the baby pass?” asked Jerry Garrett. He held a young boy on his shoulders as he talked to the mayor.

The child, Hiram Lawrence, was shot in the head while his father was holding him. Lawrence was removed from life support a few weeks after the shooting and died at Children’s Hospital in Oakland on Dec. 9.

Residents were reluctant to help the police in their investigation of the crime, according to Mayor Quan and acting Oakland Police Chief Howard Jordan.

A hesitation to cooperate with police after high profile crimes is typical in poor city neighborhoods, said sociologist Waverly Duck, a University of Pittsburgh professor who studies life in high crime urban areas.

The reasons for the hesitation are more complicated than not wanting to be seen as a snitch, Duck said. Residents want crime in their neighborhood to end, but fear that sharing knowledge with police won’t actually make them safer. They’re also frustrated that police don’t flood their neighborhood looking for perpetrators after every shooting.

The Oakland shooting happened in the early evening on a crowded corner but no eyewitnesses came forward after the crime, Jordan said. Police are currently holding six people of interest in the shooting on unrelated charges.

Outreach work helped to solve the murder of another toddler in East Oakland, Quan said, another neighborhood with high rates of violent crime.

But for some residents of West Oakland, the canvassing efforts were too little, too late.

“I think it’s a shame it took a kid getting shot in the head for this to happen,” said Tracy Washington of Quan’s efforts to reach out to area residents. Washington said she has lived in West Oakland for 24 years has seen shootouts in the streets.

“This is an area that’s been overlooked,” Bishop J.E. Watkins said. He took part in the canvas along with other members of the Pastors of Oakland, a citywide faith-based organization.

Residents of high crime areas often feel overlooked – and attention from politicians, police and the media after high profile crimes does little to ease that feeling.

The threat of violence is a fact of life in West Oakland, as resident Tracy Washington pointed out.

Crimes like the West Oakland shooting typically result from retaliations and are part of an ongoing cycle of crime, Duck said.

But what gets attention and resources, he added, aren’t the everyday acts of violence, but the handful of high profile cases each year that involve victims who are outsiders to the neighborhood, local business owners or bystanders like Hiram Lawrence.

That begs the question of why all crimes aren’t treated equally, Duck said. “Why isn’t it the case that all violent incidents are investigated and treated with the same diligence as it is when an innocent bystander or a child is hurt or harmed?”

The sudden attention to crime after a high profile shooting may not encourage residents to talk to police, Duck said.

Locals might have information about the incident through the rumor mill, but rarely have first-hand knowledge of the crime. They are reluctant to put themselves and their families at risk by sharing the little bit of knowledge they have with law enforcement – especially when they think police aren’t generally interested in what’s going on in their neighborhood and won’t be able to keep them safe if they do cooperate.

“There are no winners in this situation,” Duck said. “Police officers have a very dangerous job. There is a part of police that wants to let their guard down and get more involved.”

Developing a relationship between the community and law enforcement is good for police and residents. “Taking concern with minor issues and building relationships with kids would be a good direction,” Duck said, “and becoming a part of the community.”

That means having cops in the community all the time to help people with everyday problems – a policy that the Oakland police department has actually had in place for several years now.

Oakland has problem solving officers, or PSOs in every district in the city, and their job is to build relationships with the neighborhood that is their beat, said OPD spokeswoman Johnna Watson.

PSOs are responsive to what residents need from the police, Watson said. “It’s a two-way street,” she said. “Asking what does the community want? What do they expect from us?”

Additional PSOs from districts throughout the city were sent to West Oakland in the wake of the shooting, too. They were working diligently to encourage the community to cooperate with the police, Watson said.

Asking for help in tense moments following a high profile crime – when residents may fear for their own safety – is unrealistic, Duck suggested.

“To implicate a community that is already struggling, to get them involved in these cases, is putting a real burden on this community,” Duck said. “You are asking people to put themselves at risk when they have very limited information. And there is no guarantee that they will be or remain safe when these incidents are so common.”

After high profile crimes, residents reluctant to talk to police