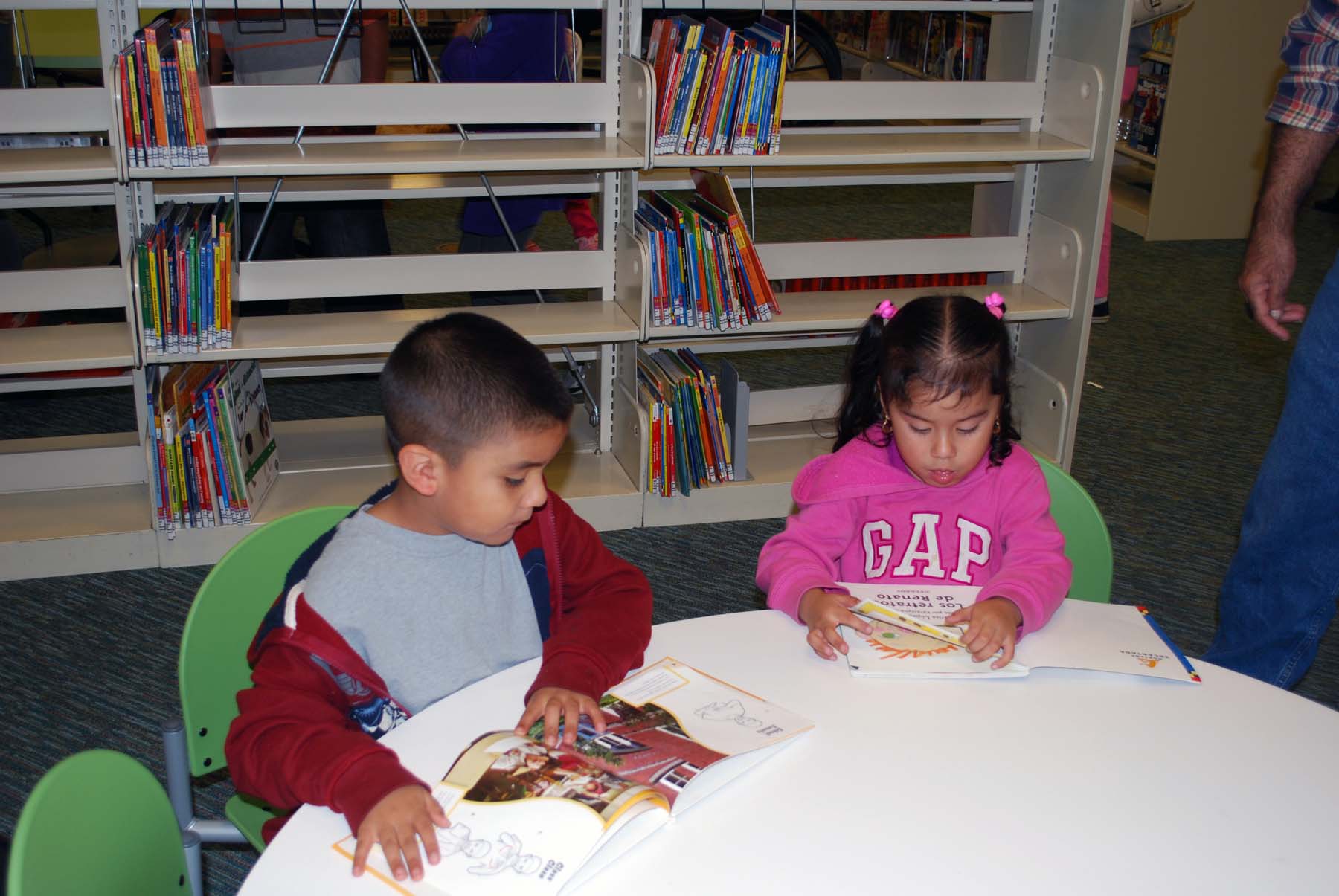 A set of twin boys sat at one table at the end of the room, snacking on pretzels, Cheerios, Chex and other healthy treats. Two girls made a beeline for a box of dress clothes when they entered the room. A group of toddler boys played with blocks. Parents signed their children into the childcare area to give them a chance to visit the exhibit, with headsets available for Spanish speakers, at their leisure.

This hands-on, family friendly learning experience took place at downtown Salinas’s National Steinbeck Museum in “The Wonder of Learning” exhibit, on display through Nov. 15. The family day event, hosted by First 5 Monterey, explains a teaching method developed in Reggio Emilia, Italy. Salinas is one of the stops it has made during a six-year tour that ends in 2014.

The method was developed after World War II, when residents were concerned about the blind way leaders from the era were followed, said Francine Rodd, the executive director of First 5 Monterey.

“They wanted to build creative thinkers,” Rodd said. “They developed a system of pre-K and elementary schools that believe children are born creative, curious and capable rather than helpless.”

Bringing such information to parents in underserved communities is part of the mission of First 5 Monterey, which supports programs that offer parenting development and quality child care and improve the mental and physical health of children.

Priority zones, where services are focused, were developed based on economic need, Rodd said. They include Salinas, as well as King City, Greenfield and other areas.

They looked at indicators including the number of Medi-cal births in hospitals to decide where to target their resources. In hospitals with the highest rates, 90 percent of the births were Hispanic or Latino. Ninety-eight percent of families served by First 5 Monterey are Latino, and the rest of the population is mostly African American and white.

Monica Melendez is one of the parents who lives in one of the priority zones. She heard about the playgroup programs offered through First 5 from a family member who had school-age children.

“I was having concerns about my son,” she said of her 3-year-old. “He’s an only child and he’s home all day with me.”

She said that her son seemed shy and didn’t want to play with his cousins when they got together with extended family. Now they attend the playgroups twice a week and her son is becoming more confident. She said he has learned to share and is less shy around other people.

“We learn many things,” she said. “How to make toys and activities. They gave us a recipe for play-doh and I made it here at home.”

The funding for First 5 Monterey comes from state Proposition 10, a cigarette tax that is levied for early childhood education, as well as grant funding. In the most recent state budget, Assembly Bill 99 called for $1 billion of the Prop 10 funding to be moved over into the general fund. A legal challenge is currently underway. The cut will impact the number and amount of grants First 5 Monterey is able to give out each year.

Parents like Melendez helped set the priorities for which services would be offered through the program. The current priorities for First 5 Monterey were set after an intensive strategic planning process that they underwent in 2006 that included outreach to more than 1,000 residents.

Families wanted programs that were culturally and linguistically appropriate and coordinated between agencies. They also wanted flexible hours to accommodate their demanding jobs, many in the fields around Monterey County, and childcare.

First 5 collected donations to cover transportation costs for families and some day care employees to visit the exhibit. On family day, groups of parents and kids arrived on a bus to view the exhibit and dozens of parents arrived to check their children in to the free child care area. Volunteers took the children by the hand and led them to different activity stations until they become comfortable and their parents could look at the exhibit in the next room.

The exhibit featured large panels that showcased different ways to teach children using many senses and allowing them a variety of self-expression. Children listened to the noises made by different shoes, for instance, and drew pictures to represent the sounds. In the back of the exhibit, a light table was set up with different shaped items on top so kids could see what types of shadows they cast. Outside on a patio, volunteers set up a few work stations that included a mobile-making site that had shiny materials for children to adorn it; a table with gourds that children could touch with different textures; a table with mortars and pestles so that kids could grind up objects; a rock sifting station and more.

The method calls for using a lot of natural materials, rather than expensive, high-tech toys to teach students and engage kids and parents in interactive play.

In addition to hosting events like Family Day at the museum, First 5 Monterey funds a family resource center that provides many free programs and services in Salinas such as parenting workshops, playgroups for children and parents, home visits and application assistance for Medi-Cal, Healthy Families and Healthy Kids Insurance programs, and more.

During the regular parenting workshops, the lesson might focus on health or nutrition or social and emotional needs, “as well as equipping parents with some knowledge about how to be an advocate for their children,” Rodd said.

They also support a workshop that teaches parents about positive discipline.

Part of the emphasis of “The Wonder of Learning” is focusing on the whole child and allowing them to be creative in many different contexts. The panels show children engaged in indoor and outdoor activities, often in ways that allow them to move around and participate in physical activities. There is also a focus on being positive about the different ways in which children learn.

The families they service are not sure when to seek help for their child, Rodd said. That feeling of uncertainty doesn’t just happen in poor families, she added.

“Sometimes there is a stigma or concern, in any culture,” she said, “Of not wanting to admit it, or knowing where to go to get support.”