The uninsured line up at an LA arena turned hospital 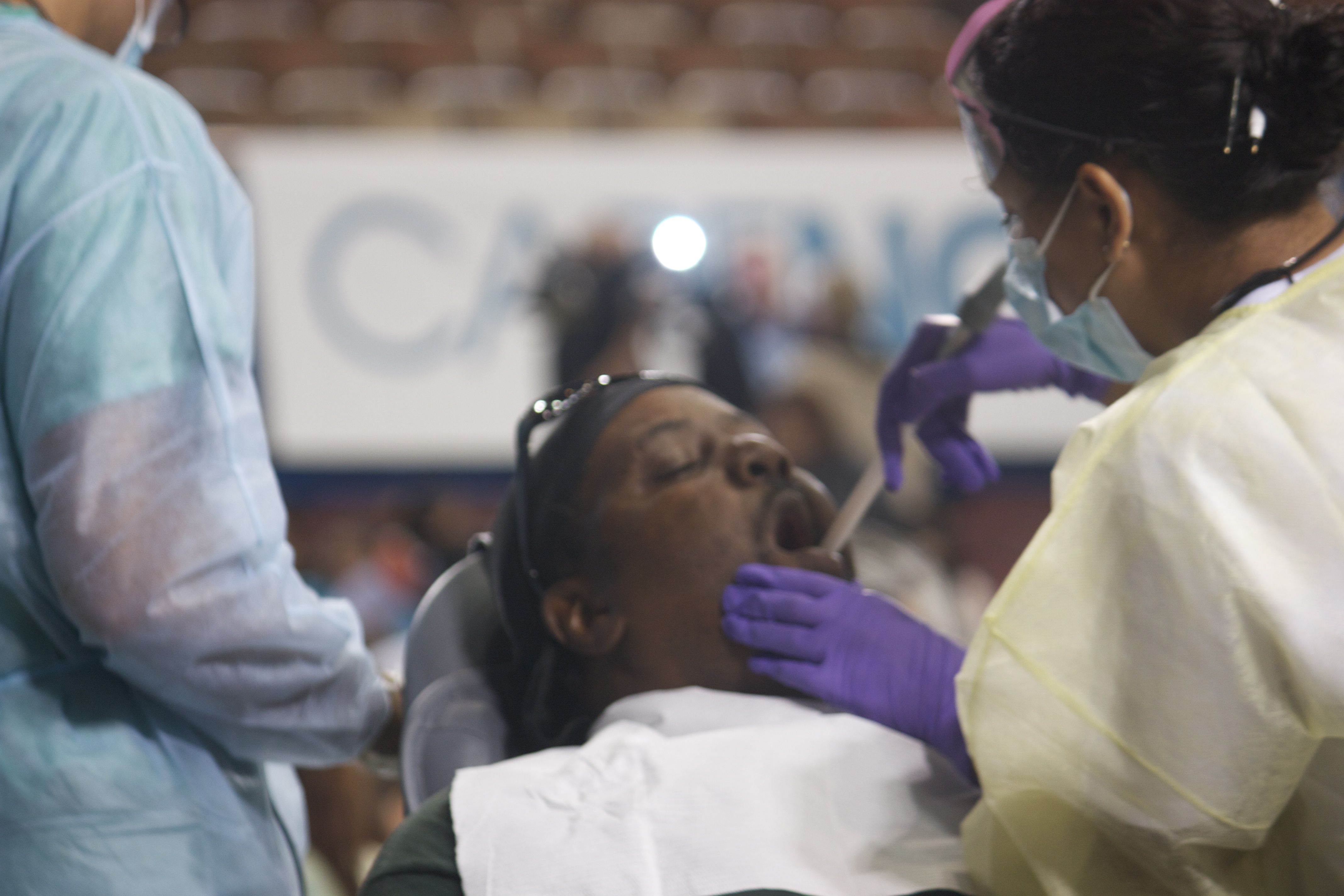 The Los Angeles Sports Arena was transformed last Thursday through Sunday into a giant field hospital for some of the city’s estimated 2 million uninsured and many more who are underinsured.

More than 4,000 people registered for the event, sponsored by the non-profit CareNow USA.

Some didn’t know how sick they were.

One man who complained of chest pain saw a doctor, got nitroglycerin, and shortly thereafter was lifted onto a gurney and transported to a local emergency room.


Volunteer paramedics and ambulance drivers planned to stand by all weekend for similar emergencies.

Fifty seven-year old Barry Payne showed up at the arena on the first day of the event.

“I came because it hurts like hell,” he said, clutching a slight protrusion on one side of his stomach.

Bien Dimalanta was among those who came early in the week to sign up for a doctor visit. He’d been diabetic for 25 years, is uninsured and was recently hospitalized with kidney problems.

“It’s a blessing, a real blessing,” he said of the opportunity to see a doctor for free.

The sports arena mega-clinic was the fourth such CareNow event in LA in the last two years. Since 2009, the organization has provided more than $7 million in health care to more than 15,000 people, according to its website.

At the arena, acupuncturists treated patients in a room off the main floor while doctors worked in small curtained booths that resembled Election Day polling stations. Mammograms and other health screenings were available as were vision care and lab tests.

But organizers said, the biggest demand was for dental care.

Hundreds of people hoped to relieve aching teeth or replace missing ones. Dentists drilled, filled and extracted teeth in the open on the arena floor.

For months, Al Norton, 51 and unemployed, knew he needed a couple of teeth pulled, but had no place to go until last Thursday.

As Norton waited with an anesthetic swab in his mouth, dentist Alvand Zinabadi said most people’s needs far exceeded the volunteers’ ability to meet them.

Norton, who was already missing teeth before the extraction, said he hoped to find a way to get partial dentures at the event, but CareNow didn’t offer that service.

“You try to go to a job interview, and if your appearance isn’t up to date, it doesn’t matter how much you know,” he said

Not everyone who seeks help at CareNow events is poor or even uninsured, said Don Manelli, the organization’s president and founder.

“A lot of people have coverage but it’s too expensive or the deductible is too high,” he said. “We see MBA’s. It’s an amazing cross-section.”

But for the majority of patients who are working for low wages or who are unemployed, Care Now volunteer Brooks Mc Ewen said, “The big thrust is funneling people into clinics so maybe we won’t have to come next year. The idea is to make a permanent impact.”

This year, some CareNow patients will be able to receive consistent care at community clinics because of county efforts to prepare for federal health reform.

In 2014, when the Affordable Care Act takes full effect, all adults who earn slightly more than the federal poverty level will be enrolled in Medi-Cal at federal government expense.

Los Angeles County is ramping up for that expansion by boosting participation in Healthy Way LA, a health insurance program for low-income adults who had previously been disqualified from Medi-Cal because they were not raising children.

Enrollees are assigned to a clinic where each has a primary care provider and access to mental health and specialty care.

This year, with additional county and federal funding, Doi said her goal is to have as many 150,000 people signed up by next July.

She estimates that more than a half million county residents are eligible for the program.

County workers staffed a Healthy Way LA information table at CareNow, along with a slew of exhibitors offering everything from smoking cessation to CPR training to bedbug prevention and yoga.

“The number of people here, the size of the population who is seeking care reminds me why health care reform is needed,” Doi said.

After patients were treated they were sent to make follow-up appointments with community clinic staffers who were on hand at the event.

One of those patients was Barry Payne, the man who came to the arena seeking treatment for his stomach.

By mid-day he was still hurting, but greatly relieved. He’d been diagnosed with a hernia, but said he had worried that it was something worse.

A computer glitch kept him from getting an appointment on the spot, but he said he’d been promised one, and better yet, avoided a trip to his local hospital emergency room.

The uninsured line up at an LA arena turned hospital