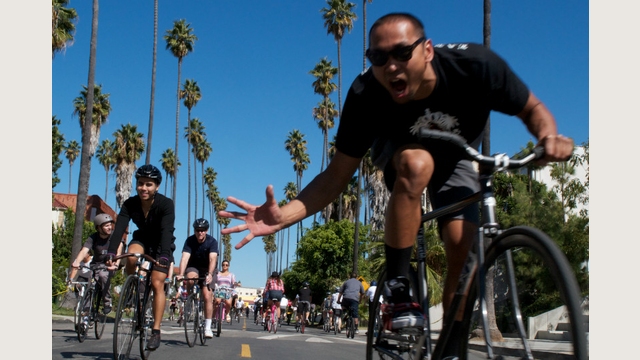 The hermanos riding tricked-out, sparkly low-rider bicycles emblazoned with broken hearts and the Virgin Mary. The power-walking septuagenarians in matching hats. The lone unicylist. All were among the 130,000 bicyclists, runners, and inline-skaters that took part in LA’s biggest street party, CicLAvia, on October 9.

For five hours that day, city officials barred motorized vehicles from a 10-mile route that wended through the heart of Los Angeles. Families and children on hybrid bicycles shared the road with hipsters on beach cruisers and fixed-gear road warriors as they pedaled through downtown, Little Tokyo, Boyle Heights, and other neighborhoods. Some even brought their pet dogs, which perched in handlebar-secured baskets or in wagons pulled by their owners.

South Pasadena resident Michael Espinosa brought his wife and two daughters, who wore pink bike helmets as they glided along wide streets and past wooden barriers keeping out cars and trucks. “This is another form of Occupy LA,” he said, a nod to the Wall Street protestors camped a block away on the lawn of City Hall. “But we’re taking over with bikes and skates.”

CicLAvia (a play on ciclovia, Spanish for “bike path”) is the third such bicycle- and walker-friendly event in a city where the car is king. The concept originated three decades ago in Bogota, Colombia, which closes some of its streets every Sunday for cyclists and pedestrians.

Response from Angelenos has been enthusiastic. About 40,000 people showed up at the first CicLAvia in October 2010. That number doubled at the second CicLAvia in April and the crowds for the October 9 event were more than triple that of the first. The next event is scheduled for April 15, 2012.

The city and its various agencies—including the health and transportation departments–partnered with private non-profit groups and corporations to fund CicLAvia, which costs more than $300,000 to produce. The event is also on the radar of county health officials as one way to combat childhood obesity. The county health department approved a $100,000 grant to teach at least five cities to implement their own cycling and walking events. The cities identified so far are South Gate, Lynwood, La Puente, San Fernando, and Pomona.

Organizers emphasized that the event was not just for bicyclists, but also for pedestrians, skateboarders, and others using their feet to get around. Consequently, CicLAvia featured walking tours that explored the history and culture of several immigrant communities, music, dancers, food trucks, mobile storytelling, and dodgeball games. Solar-powered DJ’s, street musicians who played everything from funk to traditional Balinese Gamelan music, and a traveling photobooth added to the festival atmosphere.

“CicLAvia is about bringing people together, about civic pride in public space, about getting more exercise and green transportation,” said Joe Linton, one of CicLAvia’s organizers. “But it’s really about fun.”

“We trick people into getting exercise,” he added. “There’s no starting point and no ending point. This is not a race. It’s people coming together and chilling out.”

Los Angeles resident Brian Nolan skated CicLAvia’s 10-mile route. He drives downtown every day for his job, but the event allowed him to savor the city.

“I’m here to enjoy the outdoors. I’ve seen things I never noticed before when I was in a car, like all the birds and the buildings’ architectural details.”

Bobby Roshan, owner of artisanal coffee and teahouse Demitasse, said CicLAvia gives valuable exposure to his business and others in Little Tokyo. “It exposes us to a different group of customers,” he said, during a brief lull. “There’s less pollution, and it also makes LA a more interesting place to live.”

Aaron Gross and his family, like many CicLAvia participants, took their bikes on the Metro subway system to get to the event. Anticipating demand, Metro added 10 newly retrofitted bike cars to accommodate cyclists. He credited Los Angeles Mayor Antonio Villaraigosa for putting his shoulder behind the event, adding, “LA will always have a car culture, but it doesn’t mean that there isn’t room for bikes.”

CicLAvia is also a sign that Los Angeles is slowly starting to implement green, health-conscious solutions for its legendary traffic. The event complements a comprehensive bicycle plan that calls for an ambitious 1,684-mile bikeway system and instructs the city to build at least 200 miles of bicycle-friendly streets every five years.

Unlike most bike plans, this one has teeth. The city has set aside $15 million to develop the first 253 miles of bikeway over the next five years. That ranges from painting bicycle markings on the road and installing signs to striping bike lanes and building traffic diverters and crossing islands. California’s new Complete Streets Act, which requires that the city give equal consideration to all modes of travel before funding a road project, also shores up the LA Bike Plan.

Another policy further bolsters LA’s nascent evolution as a bike-friendly town. The city’s new “Cyclist Anti-Harassment Law” allows cyclists to sue drivers in civil court, and, if successful, offers ways for them to recover damages and attorneys’ fees. The law is the first of its kind in the nation; it went into effect in September.

All of these actions point to the increasing popularity of cycling, said Jennifer Klausner, the executive director of the Los Angeles County Bike Coalition, a nonprofit group that helps organize CicLAvia. While only about 1 percent of adults in Los Angeles commute daily by bike, 5.3 percent bike at least once every week, and 16 percent do so each month, according to a 2009 research paper (.pdf) in the Journal of the Transportation Research Board. In the summer, the number of adults who ride bikes increases to almost 30 percent.

“We’ve been banging on doors for years, but now we have a chorus of voices with us,” she said. “People of all ages from all around the community are riding bikes now; you can’t make generalizations about cyclists like you used to.

“And when the city better accommodates bikes, it improves life for everyone.”