Café a hub for health and art 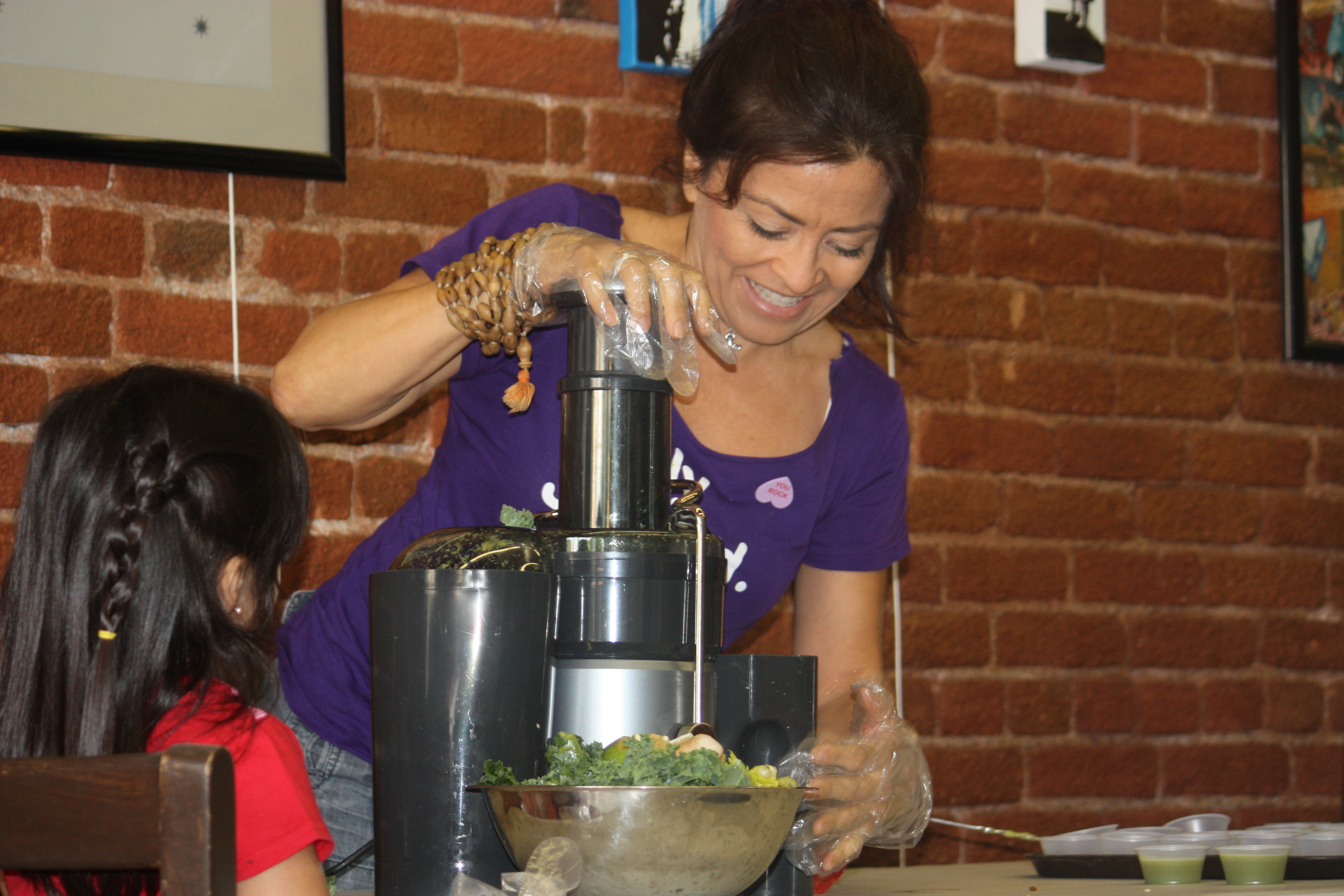 Healthy living was the catchphrase at East LA’s Primera Taza Coffee Shop on a recent fall weekend. Community activists and artists of all ages helped to drive the importance of healthy living home. They expressed themselves in forms ranging from painting to spoken word to graffiti.

Some were competing for an iPad – a prize for the best artist and best-spoken word performance with anti-drug themes.

Others just wanted to show their skills or spread a pro-health message.

The lights were down at midday in the café and “Fat Sick and Nearly Dead” by Australian documentarian Joe Cross was onscreen. In the film, a sort of “Supersize Me” in reverse, Cross travels the U.S. drinking only fruit and vegetable juices in an ultimately successful quest to cure an autoimmune disorder and shave 20 or so inches from his waistline.

Lupe Carranza had found inspiration in the film and wanted to share, she said. The two-year old Boyle Heights café, a hub for local events, immediately came to mind.

“This coffee shop is always doing something for the community,” Carranza said.

“I looked like I swallowed a sheep,” Cross declared in an Aussie twang as the movie opened, his bulging belly filling the screen.

As the final credits rolled, Carranza got ready to fire up her own juicer for a live demo. Into the mix went deep green kale leaves, green apples, ginger and other veggies.

The dozen or so filmgoers gamely stepped up to sample tiny plastic cups of bright green liquid, most giving it passing, if not rave reviews.

Sal Chicas, a 40-year-old supervisor in the county’s welfare to work program, said the film convinced him to try juicing his own veggies as part of his weight-loss plan. Chicas said he’d dropped 23 pounds since his doctor told him he had pre-diabetes last April.

Primera Taza is doing its part to help the community up its vegetable intake. The shop helped to organize a once-weekly farmer’s market, held just down the street in Boyle Heights.

The coffee shop has also added to Boyle Heights’ burgeoning art scene. Nearby is live theater venue Casa 0101 and arts collective Corazon del Pueblo, as well as the venerable Self-Help Graphics, ground zero for Chicano artists since the 1970s. Half a block away is Mariachi Plaza, LA’s answer to Mexico City’s Plaza de Garibaldi where Angelenos who are planning weddings, quiceaneras and birthdays go to hire musicians in full charro gear.

As night fell, a mix of the coffee shop’s Facebook fans, regulars, and passersby began to gather—for coffee, conversation and a spoken word show.

Julian Villanueva, 19, sprayed paint with a steady hand onto four-wooden panels outside the shop.

“I used to do graffiti on the streets…causing chaos, going to jail, getting shot at, getting beat up,” Villanueva said.

Now, Villanueva said, that part of his life is over. But he still practices his art “to glorify God as much as I can.” And he wears a respirator to protect him from the fumes, something he says he didn’t do when he was running from the law.

The design he’s spraying on the panel is a tag that reads Amos, a tribute to the biblical prophet.

He’s passed on the skill to his nine-year old granddaughter, Abigail Sifuentes, a fourth-grader from the LA suburb of Whittier.

“Live Strong, Stay Strong” was the anti-drug message she carved into bright red paper. She labored for eight hours, and for the first time ever, used a chisel, the cutting tool that traditional practitioners of the art employ.

What is non-traditional, Romero said, is his shop’s eclectic programs and full agenda, which includes Zumba classes, arts and crafts, poetry, and acoustic music shows. He also plans to start offering Yoga instruction.

Meticulous planning and promotion aren’t his strong suits, Romero said. But he he doesn’t hesitate to do anything just because full funding isn’t available.

Café a hub for health and art