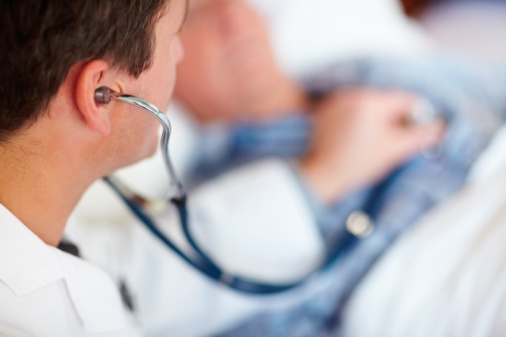 A severe physician shortage in rural California is just one reason that many farm workers don’t get health care.

But in Stanislaus County, the Valley Consortium for Medical Education is taking on the shortfall with a boost from the federal health reform law.

Stanislaus County medical director Dr. Del Morris estimates the county has only about 68 percent of the physicians it needs to care for local people.

A 2005 survey of farm workers in 13 California counties, including Stanislaus, by Aguirre International, showed about half hadn’t seen a doctor in the past two years.

“The Central Valley, from an economic poverty and health point of view, is like Appalachia,” Morris said.


Now, a $2.5 million dollar annual grant to the Valley Consortium under the Affordable Care Act will help the residency program chip away at the Central Valley’s yawning physician gap.

On a Wednesday afternoon, about 20 of the program’s doctors-in-training sit in the conference room of a county clinic in Modesto puzzling over questions like this one:

“A 68-year old white male with diabetes is hospitalized after suffering a right middle cerebral artery stroke. A nurse in intensive care calls you to advise that his blood pressure is 200/100”

“Are we ready to see the results?” the instructor, a third year resident, asks.

Fifty-six percent have weighed in with the correct answer: A. Continue monitoring.

These are the kind of questions the doctors see on yearly residency exams or on the tests they must eventually pass to become board certified family practice physicians.

The doctors are a diverse bunch.

Charlie Walker is a career-changer in his forties, who once worked customizing motorcycles.

Jan Janay studied medicine in his native Philippines and worked as a registered nurse in the U.S. before entering the program.

Gilberto Cota grew up in the border city of Mexicali, and landed a spot in a UCLA program designed to train Spanish-speaking doctors to practice in the United States.

Each of the residents beat out nearly 500 competitors to win a slot, said Dr. Kate Kearns, the program’s associate director.

If the past is a guide, about half will practice in the Central Valley when they complete the program; nearly a third will settle there long-term.

That’s a measure of success, according to Morris. The short supply, especially of family doctors, he argued, drives up health care costs.

“I think of things like diabetes out of control and coughs that become pneumonia and sepsis because they are discovered late.”

The physician shortage hits the poor hardest but it affects everyone, even the insured, who sometimes struggle to find doctors who will accept new patients.

The residents – some 30 in all – do 25,000 patient visits a year – at a local hospital and at county-run health centers that accept Medi-Cal and offer a sliding scale for the poor, according to Dr. Peter Broderick, who directs the residency program.

Dr. Janay, in his fourth month of the residency, said he planned to build a career in family medicine because he likes getting to know patients.

Currently most of the patients he and the other residents see lack ongoing care, and it shows, according to Morris.

“This population has a disease burden like a geriatric practice, except many patients are in their fifties, “ Morris said.

He saw her in the clinic five months after she’d run out of medication.

Her blood pressure was so high that she was hospitalized for five days.

“Those five days in the hospital were a lot more expensive than any medication, any lab tests,” Cota said.

To help bridge the primary care gap, the feds have committed more than $10 million over five years to support the program, which has been designated California’s first teaching health center.

The idea is that adding more doctors will help more people get care, presumably to meet the even greater demand expected in 2014 when many more people will be insured under the ACA.

“You might have insurance but you might not have access,” Broderick said. “The number who’d be insured versus those who could step up to regular health care is debatable.”

Less than half of the state’s farm workers are expected to be among those lining up for care when health reform takes full effect. The 2005 Aguirre International survey, “The California Farm Labor Force: Overviews and Trends from the National Agricultural Workers Survey”, estimated that about 43 percent are legal residents or citizens, and will therefore be eligible for a massive expansion of Medicaid that will include most of the working poor. Those who earn slightly more will be eligible for subsidized insurance.

But the majority of ag workers, who don’t have legal immigration documentation, are likely to benefit only indirectly.

ACA funding for family physican training, like the Valley Consortium, and its investment in expanding community health centers could be the only way many in Stanislaus County – farm laborers and other low wage workers – will feel the effects of federal health reform.

Currently, many who are undocumented and uninsured seek care at St. Luke’s Family Practice, a Modesto clinic where insured patients subsidize the uninsured.

Demand is so high for the clinic’s services that it must turn away about ten percent of would-be patients, said Dr. Richard Heck, a St. Luke’s physician.

Heck estimates that about 30 percent of clinic clients are farm workers.

The ACA might ease St. Luke’s patient load somewhat, but Heck expects business to continue as usual because of the many undocumented people who won’t be able to get care elsewhere.

“I think there will still be an inundation of the system especially in a place like Modesto where there’s a dearth of physicians,” Heck said.

When he graduates at the end of this year, Cota will continue to see the underserved. He’ll work in East San Diego County, another doctor-poor area – where he once served as a medical assistant and diabetes educator.

Earlier this year, HR 1216 would have put the residency on shaky ground by forcing it and similar programs to apply for federal funding each year. That would make it especially difficult to run a program that commits to a three-year training period for each resident, Broderick said.

The bill died in committee, but Broderick said he worries that a similar effort could re-emerge depending on the outcome of the 2012 elections.