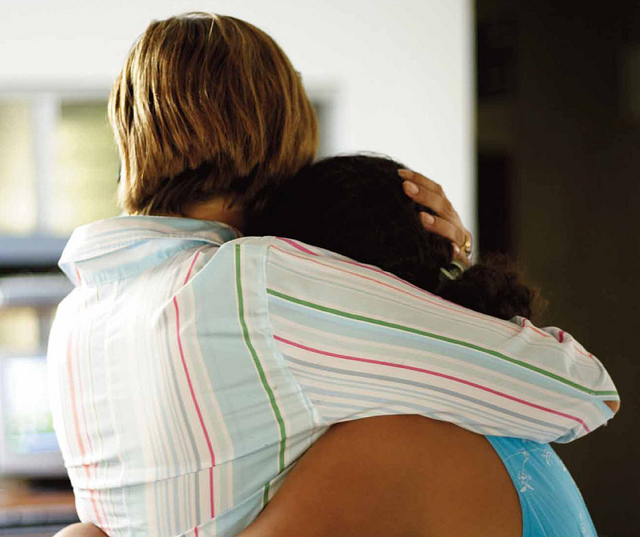 Oakland teenager Daisy Armstrong held the audience at the city’s First Unitarian Church captive with her spoken word performance. “She makes money any way she knows how,” Armstrong said in a cadence between a croon and a chant, her voice filling the church without help from a microphone. “She just turned 13. Shouldn’t know what a naked man looks like.”

That poem, she explained after finishing her recitation to thunderous applause, was based on the experience of a 14-year-old acquaintance who was prostituted on the streets of Oakland.

The audience so moved by her performance was all too familiar with the story Armstrong recounted. They were mostly service providers, but also law enforcement, judges and attorneys, and many of them work to stamp out the problem of prostituted children in the city.

They gathered at the church on a recent fall afternoon to listen to Julian Sher, the investigative reporter and author of Somebody’s Daughter: The Hidden Story of America’s Prostituted Children and The Battle to Save Them. His book is part of a recent trend of attention to the problem of child sex trafficking in the United States.

“Oakland may be the crucible of the problem,” Sher said. “But it may also be the solution.”

A stretch of International Blvd. in East Oakland is notorious as a hub of child sex trafficking.

“A lot of the kids that are picked up here are not even from Oakland,” said Nola Brantley, the executive director of MISSSEY, an organization devoted to helping victims of child sexual abuse and economic exploitation.

High levels of poverty and other high-priority violent crimes, like murder, make the area a breeding ground for exploitation, Brantley said.

Any child, she stressed, could become a victim of sexual exploitation. The primary risk factor is age, she said. The average age that a child becomes sexually exploited is 12, Brantley said. Pre-adolescents are particularly susceptible to the manipulations of pimps.

The kids who live in neighborhoods like East Oakland, however, are especially vulnerable, Brantley said. Home life in poor neighborhoods can be less stable. Parents of exploited kids tend to have a history of incarceration and drug abuse. Children who are trafficked are very likely to have a history of sexual abuse and to have spent their childhoods bounced around foster homes.

“These kids grow up in an environment where victimization is normal,” Brantley said.

Sher tossed out chilling national numbers on the problem of sexually exploited children at his talk: 61 percent of children who are prostituted were rape victims before they were exploited for money. Fifty-five percent of them are foster children and 25 percent were hospitalized for mental health problems.

The extent of the problem of prostituted children in the U.S. was hotly debated after a recent Village Voice article suggested that the number of juvenile arrests for prostitution indicated a problem that was miniscule in scope.

Brantley uses referrals from social services and participation levels in programs for prostituted children in addition to arrests to estimate that at least 500 people under the age of 18 were prostituted in Alameda County last year.

That number has doubled since MISSSEY started offering services in 2005, Brantley said, but she attributed the increase to more understanding and reporting of the problem, rather than an uptick in exploited children.

Looking for high numbers of sexually exploited children is the wrong way to define the problem, Sher said. “The lack of numbers is the answer,” he said. “No one is counting them because they don’t count.”

The healing process, helping the girls mend themselves and stay off the street, has both practical and emotional components, part of which is making the girls feel like they count.

At MISSSEY, which is currently serving 75 children under the age of 18, and admits clients up to age 21, girls get services from assistance with housing to help getting to doctors appointments. “The goal is self-sustainability to reduce vulnerability,” Brantley said.

But they also get Christmas presents, field trips to places like Half-Moon Bay and a drop-in center for girls over 14 where they are always welcome. “They never have to leave the program,” Brantley said, “they are always part of MISSSEY.”

MISSSEY gives the girls a sense of home, filling in a gap in their lives that might have left them vulnerable to exploitation in the first place.

Even with the focus on sexually exploited children, there are not enough resources to provide needed services, Brantley said, noting that her program is always full.

The relative lack of services available to women who were trafficked as children and remained “in the life” after they turned 18 is also a serious problem, advocates say.

Few services exist for adults who were prostituted as children, said Gloria Lockett, director of CAL-PEP, a decades-old organization focused on connecting prostitutes and prostituted children with services like HIV testing.

Open-air prostitution contributes to an atmosphere where children can be sexually exploited, Lockett said.

But the problem of prostitution is also complicated in a way that our focus on child exploitation misses, she added. Some girls – sexually exploited children are mostly girls, advocates and statistics suggest – are driven into sex work because they need the money, not because they are tricked into prostitution, Lockett said.

“The story is more complicated than a relationship between a victim and a pimp,” Lockett said. “There are a lot of reasons why a woman may be a prostitute, besides being forced into it by a man.”

Young girls who come from families where drug addiction and prison are the norm may become breadwinners, financially responsible for younger siblings as well as themselves.

“It’s always been if they don’t make money themselves, there is no one else to take care of them,” she added.

Women prostituted as children may not be willing or able to leave the streets until they are too old for services aimed at people under 21, said Lania Watkins, a caseworker at CAL-PEP.

“A young lady I am working with now is 20. She’s been in the life since she was 12 years old. She doesn’t have any skills,” Watkins said. “It can be discouraging. Once people are adults, there are no services for them.”

The heroine of Sher’s book, Somebody’s Daughter, found herself in this precise situation, he said. Maria was raped as a child, ran away from home, and was picked up by a pimp, who kept her in his stable of girls. That part of her story fits with the experiences of prostituted children described by experts and advocates.

Maria is remarkable, Sher said, because she went on to help the FBI capture her pimp, who was later convicted of running a sex trafficking ring.

That moment of triumph wasn’t the end of her story, however. Unable to earn a living wage in her 20s, and with a young child to support, Maria returned to prostitution.

“There are very few adults today working as prostitutes who didn’t start off as minors,” Sher said. “They know if they go on the street their money problem will be solved. Resisting that takes enormous willpower.”