Childhood obesity a focus in September 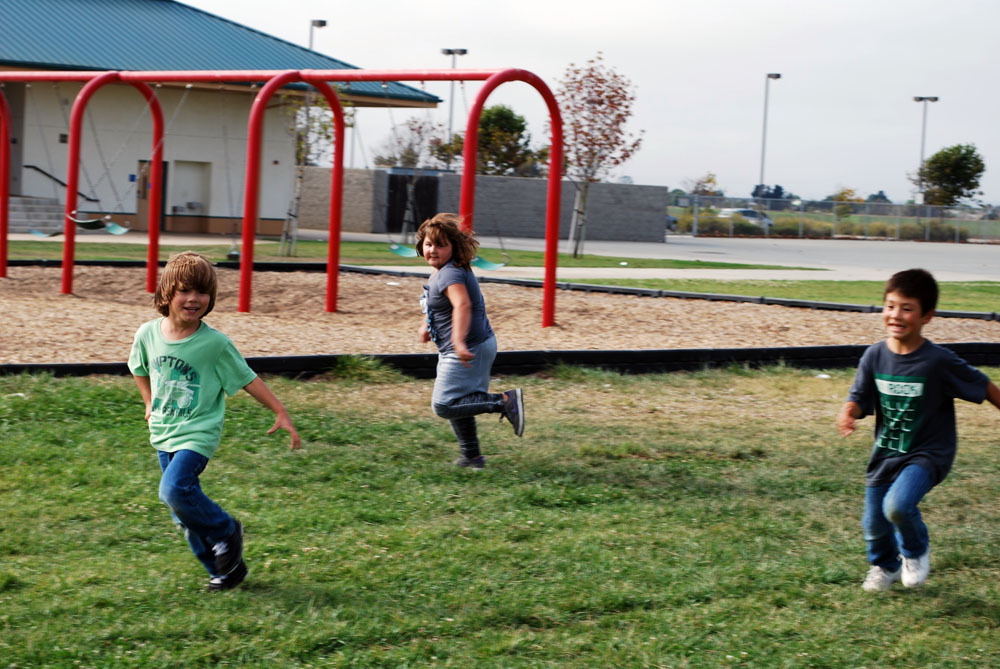 On a Friday afternoon, about half a dozen students run back and forth in a zigzag formation on a grassy field at a Salinas elementary school. The kids giggle and laugh as half of them chase the others in a game of tag called “Sharks and Minnows.” It’s all fun for the kids, but it is one of the ways the Salinas Community YMCA staff members are trying to encourage physically activity in their after school programs, which serve seven Salinas-area schools.

During the month of September, students enrolled in the Salinas Community YMCA’s after school daycare programs will be learning about eating healthy and exercise – two goals that are always a priority for the national organization and its local affiliates.

“The Y as an organization has an overarching theme called ‘Activate America,” said Lise Belton, the associate executive director of the Salinas YMCA. “We are trying to get families – to have a resource or guidance – so that they can live active lifestyles. We try to emphasize that in a lot of our programs.”

The guidance and programs offered are especially pertinent this month. September is National Childhood Obesity Awareness month, and according to statistics, obesity is a growing problem in the United States and locally. In Monterey County, 33.8 percent of fifth, seventh and ninth graders were labeled as overweight by the California Center for Public Health Advocacy, a nonprofit that promotes healthy habits. The staff analyzed the results of the 2004 California physical fitness test to come up with the number, and local students are overweight or obese at a rate higher than the state average of 28.1 percent.

The number of children who are obese – or have a body mass index that is equal to or above the 95th percentile for their age group – has tripled since 1970. Nationally, 19.6 percent of children ages 6 to 11 were obese in 2008, compared to 6.5 percent in 1980, according to the Centers for Disease Control and Prevention. Obesity in adolescents aged 12 to 19 years increased from 5 percent to 18.1 percent over the same time frame, according to the CDC.

Christian Quintero, a Y leader at McKinnon Elementary School, said for the first lesson in the unit on healthy lifestyles the kids had carrots, celery and peanut butter for a snack. Physical activity is a regular part of the after school program.

“We exercise,” he said. “It’s not laps, but they get it from activities that aren’t exercise in their eyes.”

On the recent afternoon, the kids played a game of kickball before breaking off into free play on the school equipment. After 15 minutes of that, they organized into the tag game of “Sharks and Minnows,” getting some cardio for the day.

It is only the second year that Pres. Obama has signed a proclamation declaring September as National Childhood Obesity Awareness Month. In the proclamation, signed Aug. 31, he noted the health problems that can come with it such as Type-2 diabetes, heart disease, high blood pressure, cancer and asthma. The proclamation focuses on healthy eating, noting the updated dietary guidelines released this year that changed the food pyramid to a concept called “My plate” that shows how to balance a meal between proteins, vegetables and multi-grains.

Belton said the lessons at the after school sites this month will also teach about ways the kids can stay active at home, how to eat smart and how to have fun playing together as a family.

In addition to the after school program, the Salinas YMCA, which offers financial assistance to qualifying families on a sliding scale, focuses on sports programs for children ages 3 to 9.

“It’s more about learning skills and being together with family,” Belton said, of the non-competitive programs offered.

During the summer, they offered a swim program at Alisal Community School and Alisal High School.

“We teach safety, and a love of water as an exercise,” Belton said.

They don’t offer many sports for older children since the local middle schools and high schools have sports teams available, but they do offer a strength training program for youth 12 and up.

“It teaches them gym safety and a little bit of anatomy,” she said.

The Salinas Community YMCA has 2,500 members, which includes individuals and families, Belton said, and they offer programs for the entire family for what she refers to as “health seekers.”

“These are people who want to be healthy, but they don’t know how to do it or they can’t keep it up,” she said. “We’ve got those resources and provide those opportunities.”

“Energy balance and appropriate physical activity are critical to good health and preventing childhood obesity, which is reaching record numbers in this country,” said Ellen S. Gannett, the director of the National Institute on Out-Of-School Time. “Out-of-school programs provide opportunities for children to not only consume nutritious snacks but also to learn real-life strategies for evaluating food options and making healthy choices.”

The guidelines include serving fruits and vegetables (fresh, frozen or canned) instead of cake, cookies, candy or chips; offering water as the preferred drink instead of juice, punch boxes or soda; dedicating at least 20 percent or at least 30 minutes of morning or after school program time to physical activity (60 minutes for a full day program); and ensuring that daily physical activity time includes aerobic and age-appropriate muscle and bone strengthening and cardio-respiratory fitness activities.

“The Y is proud to be part of this work to ensure that any time a child spends at a Y, and particularly time spent in after school programming, is structured to shape healthy habits for a lifetime,” said Barbara Roth, the national director of youth and family programs at Y-USA and a senior advisor on the development of the standards. The Y’s out-of-school programs serve nearly two million children each year, and many of these children spend more time at their local Ys than in school throughout the year, making the significance of these standards even greater, Roth said.

The local YMCA school sites run through the Central Coast YMCA are still working on implementing the standards, though Belton said they provide physical activity time at each site each day.

“The Y philosophy is to enjoy being healthy together,” Belton said. “Playing every day and eating – it should be an enjoyable pursuit.”

Childhood obesity a focus in September