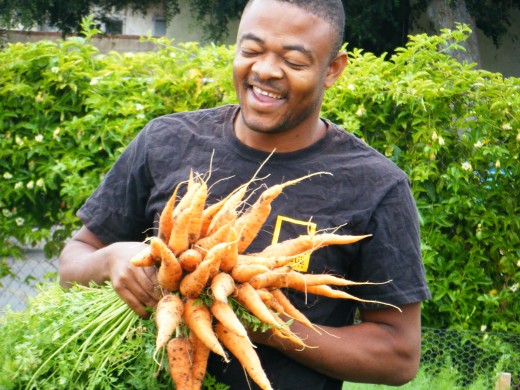 On an overcast morning recently, the New Roots Community Farm in City Heights was awake with the spicy-sweet smell of mint. Noeuth Ith, a Cambodian refugee who usually harvests the herb in small bunches to make spring rolls at home, was quickly hacking bouquets of green leaves from their bases and dunking them in water. With the help of other New Roots farmers, she boxed more than 30 pounds of the fragrant leaves to sell.

A first for the International Rescue Committee farm, the large-scale harvest was commissioned by Earnest Eats, a granola company based in Solana Beach. It purchased the mint to make 10,000 dark chocolate mint bars available for sale on the company’s website this fall. If the bars sell, it could mark the beginning of a sustainable moneymaking venture for the farmers.

“A lot of companies give money to organizations like the IRC,” said Mark Mandel, a co-founder of Earnest Eats. “We wanted to give refugees a micro-enterprise opportunity.”

Until now, the farm’s primary role has been to supplement refugees’ meager food budgets by giving them a cheap source of fresh produce. Many of the farmers rely on public assistance dollars to pay the rent and purchase groceries.

For those who sell at farmers markets or fill orders for local restaurants, the farm also provides a modest second income—usually about $50 a week.

Earnest Eats paid Ith about $250 for her mint, which will be processed by refugees who work in the company’s Oregon bakery. Ten percent of proceeds from the bar will go back to the IRC.

If the “Refugee Harvest” bars are a success, both the IRC and Earnest Eats said they’d like to see a much larger operation. Anchi Mei, a program manager for the IRC, said she envisions a collaborative in which all IRC farming programs in the United States grow ingredients for the bars. Together, they could produce at volumes large enough to get the product on store shelves nationwide; Earnest Eats currently distributes to Whole Foods, Ralph’s and Jimbo’s.

“We started out with such a small idea, but now our mission is so much bigger,” said Mandel, who began talks with the IRC last year after donating bars to its back-to-school backpack drive.

“Every step along the way, we’re doing something good to help refugees find new life in the U.S.,” he added.

This kind of seed-to-market enterprise represents one of the fastest growing sectors in U.S. agriculture. According to a new report by the Union of Concerned Scientists, local food systems accounted for $1.2 billion of agriculture sales in 2007 and are expected to keep growing and adding jobs.

New Roots hopes to catch the upswing and grow careers for refugees with limited incomes and job opportunities. Mandel hopes he can help.

“There are endless flavor possibilities,” he said, alluding to the project’s potential.

See this video on the New Roots Community Farm.