Building a green-collar economy in Oakland 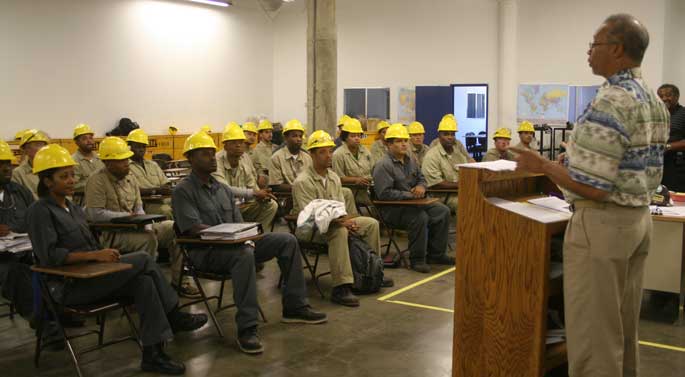 After graduating from high school in Oakland, Noel Yakubu worked a few dead-end jobs, only to be fired after a couple months of work. “I was a very lazy worker,” Yakubu said. “I was angry about a lot of stuff. I didn’t have discipline inside myself.” His mom sent him to live with his father in Ghana when he was 22, an experience that inspired Yakubu to change.

Luckily for Yakubu, Oakland has a place for people like him – who want a job, but may need more help than job training to get one. When he returned to the U.S., a family friend referred Yakubu to the Cypress Mandela Training Center in West Oakland to get a job in the construction trades.

The Cypress Mandela Training Center is home to the Oakland Green Jobs Corps. Founded in 2008, the Green Jobs Corps is the first training program in the nation to prepare residents with barriers to employment for jobs that improve the community’s environmental quality. The goal is to address two issues: high unemployment among low-income Oakland residents and changing their neighborhood’s toxic environment from years of industrial and commercial use.

The center started as a place where residents learn skills to start improving their neighborhood, a tradition that the Green Job Corps continues.

The training center was born in 1993, four years after the Loma Preita earthquake brought down the Cypress Mandela freeway. Art Shanks, one of the center’s founders, wanted to ensure that the jobs rebuilding the highway went to out-of-work West Oakland residents. Shanks and others founded the training center to introduce potential workers to the tools of the construction trades and make them attractive candidates for the jobs.

In 2008 when the City of Oakland got stimulus funds to start the Oakland Green Jobs Corps, they turned to the Cypress Mandela Training Center to manage it because of their proven track record.

From 1993-2009 the Cypress Mandela Training Center boasted an 85-90% placement and retention rate in the building trades. But since the economic downturn, only 75% of graduates have had success finding a job. From 1994 through March of this year, more than 1,200 graduates of the program have found employment in the trades.

Sean Jones, a recent graduate of the program and a job seeker, also says there is a sharp attrition rate during the program.

“It wasn’t for everybody,” Jones said. “We started off with 90 students or so and our class graduated with like 20.”

Critics of job training programs around the country say such programs are doomed to fail because many people from disadvantaged backgrounds are lacking soft skills. They struggle with things like anger management, punctuality, eye-contact, substance abuse or even a firm handshake. To address this issue, Shanks developed a required life skills class for program participants.

“Most of the kids come from fractured homes.” Shanks said. “So its very critical for students that don’t have those good foundations, that a program exist like this that can teach those skills.”

The results of these lessons is evident at the training center. Students respond to instructors with military precision and offer a firm handshake upon introduction.

The program requires regular drug tests and all participants must be clean and sober. Graduate Tony Lanz said it was hard for him to stop smoking marijuana for the program. The instructors, however, offered a persuasive argument against substance abuse.

But the program provided Lanz with more then training in his future trade and life skills. The teachers were the parents and stable home he never had. “They give you that tough love that you need,” Lanz said. As a father of two children himself, Lanz says the program’s no cursing policy also improved his parenting skills.

“My children are like sponges,” Lanz said. “ So the use of foul language is zero-tolerance in my home.”

Shanks beamed like a proud father as he pointed to all the awards issued to the program and its students on his office wall.

More than a year after graduating from the program, Lanz was working as a security guard because he couldn’t find a job in construction. But then he got a call from Shanks who told him he had an interview for a job at an EPA lead remediation site in West Oakland. Three weeks ago, Lanz, Yakubu and three other graduates of the program showed up for their first day on the job.

Lead levels in the soil of the Prescott neighborhood are two to five times above the federal safe level. In the past, workers would use big machinery and dumpsters to haul out the contaminated soil and replace it with new soil. Not only was this an unsustainable solution to the problem, but it disrupted the neighborhood.

Now, Lanz and his team are mixing fish bone waste from canneries in Alaska with the contaminated soil to neutralize the lead. They then cap it off with grass so that it is safe for children to play on. “The largest piece of equipment we’re using on the entire remediation is a rototiller,” contractor Maggie O’Donnell said.

Over the next two years they plan to clean up 150 residential lots affecting about one thousand residents, but they are starting with four empty lots. The pungent smell of the fishbone is clear from the sidewalk outside the worksite. Lanz says the smell lasts for two days. This project is the first time the fishbone method has been used in a residential area. Chris Griswold, Civil Engineer for the project is trying to figure out a way to reduce the smell for when they begin work on residential yards.

Shanks hopes that more graduates of the training center will be one ones working in those yards. But he also predicts that graduates are likely to be hired to work on the Kaiser and Highland hospitals green building projects.

It remains to be seen if these jobs can influence Oakland’s 15.4% unemployment rate. But contractor Maggie O’Donnell predicts the green-collar industry will only grow.

“I think the politics and the social attitude is finally catching up with the technology that’s always been in place, that we’ve worked with for 20 years,” O’Donnell said.

According to an education and training needs assessment for energy efficient jobs throughout the state of California, 78,205 trained workers will be needed in that field over the next 11 years. Two-thirds of those jobs will be in the construction trades, said the report, released by the UC Berkeley Labor Center in March

However, the report concludes that with so many journey-level trades people already out of work, it would be better to train the incumbent workers in the green technology, instead of investing in new workers like those getting trained at the Cypress Mandela Training Center.

But O’Donnell plans to hire the next round of laborers for the lead remediation project from the training center.

“I’m hoping for some of these guys this is a career path,” O’Donnell said. “They can take it on the road, they can go into homes, they can train homeowners how to do it themselves.”

Noel Yakubu is also working on the lead remediation project. He is saving his money for supplies to return to Ghana and help install solar panels.

“I felt like I was helpless,” Yakubu said, “now I’m actually doing something to help my community.”

Building a green-collar economy in Oakland