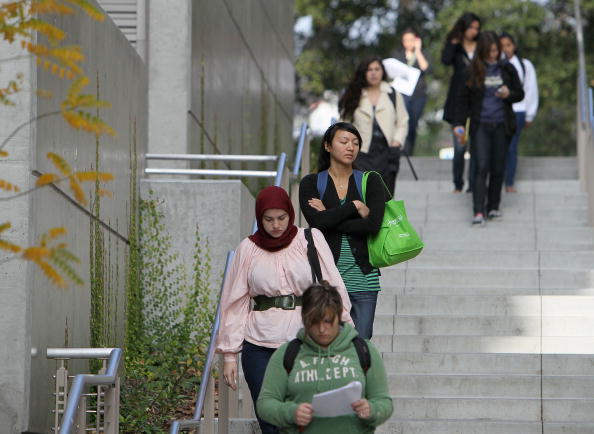 Item No. 13 on his California State University admissions application was the first time it really hit him—Victor, who asked that his last name be withheld, didn’t have a social security number. It was a fact he had grown up with since the age of three when his mother brought him to City Heights from Coahuila, Mexico. When asked to produce the 10-digit number during his junior year of high school, he finally understood its significance. He was undocumented.

Like a seemingly growing number of students in City Heights, Victor, currently 19, was thrust into an academic and social limbo with the completion of high school. Unable to qualify for financial aid or find regular work because of his citizenship status, he went from being an honors student to “living in the shadows,” he said.

Victor and his former teachers have watched four versions of the California Dream Act, which would have extended college financial aid to undocumented students, pass through the state legislature and cease at the governor’s desk. Now, with state budget cuts squeezing community colleges—the only feasible route to a higher education for Victor and other undocumented students—they watch with new urgency as the act presses the Capitol once more in its fifth iteration, AB 130 and 131.

“We do have to talk reality with the kids who are undocumented,” said Cindy Page, who teaches AVID, a college readiness program, at the Crawford Educational Complex in City Heights. “It’s really hard because it usually takes a couple of years for them to come forward and, by that point, they’re already superstars and looking at colleges.”

While undocumented students can technically enroll in a university, many of them never do. Current state law extends in-state tuition to those who attended three years of high school in California, but the benefit is often little help in City Heights where the median income is about than $25,000, according to the U.S. Census. Private scholarships and loans that don’t require a social security number are hard to come by. The same goes for jobs and a path to citizenship.

“When I told my teacher that I didn’t have a social security number he looked at me differently, like I was no longer his student because I didn’t have a chance,” said Victor, who began acting out and neglecting his school work after learning about his citizenship status.

Victor, like others with undocumented status, enrolled a community college because the courses were affordable. He picks up freelance work on the side, trying to save up for a bachelor’s degree that he said he’ll earn piecemeal, one semester at a time as his wallet allows. But the community college system is a different kind of limbo for Victor—an in-between from which less than 30 percent of students matriculate, according to the Institute for Higher Education Leadership and Policy at CSU Sacramento. The risk of drop-out is even steeper for immigrants, who deal with unique stressors including legal stress and families in need of an extra paycheck, said Page.

Now, state budget cuts are pushing a university transfer farther from reach, further complicating options for undocumented students to obtain a degree. Victor had to postpone his transfer date, in part because the cash-strapped San Diego Community College District cancelled most of its course offerings in the coming months, essentially shutting its doors for the summer. The governor’s May budget revision offered a better outlook for the fall term, but the California Community Colleges Chancellor’s Office warns better-than-expected revenues could harm efforts to extend current tax rates in a special election, which it says would secure long-term funding for the system.

The funding opportunities afforded by AB 130 and 131 could grant undocumented students access to state universities and help those with competitive grades sidestep the deteriorating path laid by community colleges. While state universities are also experiencing a financial squeeze, budget cuts there typically manifest in more competitive admissions, not cancelled terms. It’s a competition in which Victor would have excelled, he said.

“I might be more intelligent and more creative, but I didn’t have the proper digits to obtain what other students could,” Victor said, referring to financial aid.

According to Page, undocumented students are typically higher achieving than their second- and third-generation counterparts because their parents carry with them a rhetoric of new opportunity. They’ve been student body presidents and, according to Victor, even valedictorians. But that drive often falters when students run into roadblocks at community colleges. Page said she’s watched some of her students give up, instead focusing on marrying for citizenship or finding work to help their families.

With two other high schools in City Heights, it’s estimated that about 50 area students graduate without legal status each year. And this trend could be approaching its peak. According to the Pew Hispanic Center, a nonpartisan research group, the rate of illegal immigration increased steadily during the 90s until dropping off in 2004. During this time, white families began moving from City Heights due to an increase in crime, leaving vacancies and cheap rent for new immigrant families whose children would have begun graduating last decade. Page, who’s been at Crawford for 20 years, said she began consistently meeting undocumented students in 2000.

“The situation is the situation and how it started is irrelevant,” Page said of undocumented students who were brought to the United States as minors. “My focus is on the kids. I’m not interested in the legality of it.”

Opponents of AB 130 and 131, aren’t necessarily interested in the legal aspects of their immigration either. Rather, they cite the same financial situation that has stalled Victor’s progress toward a degree. Many opponents said residents of a cash-strapped state can’t afford to foot the bill for those who came here illegally. According to a report by the state’s Legislative Analyst’s Office, undocumented immigrants cost the state $4.2 billion annually.

Such sentiment is likely why AB 131 was held on suspense before moving to the Senate last week. It would allow undocumented students to apply for state-funded fee waivers, Cal Grants and institutional grants funded with state money. Its sister bill, AB 130, only freed up private grants administered by universities.

San Diego state senators Christine Kehoe (D-SD39) and Mark Wyland (R-SD38) were split on the version of the dream act introduced in the State Senate last year; Kehoe had the aye.

Illinois democrat Dick Durbin introduced a federal dream act in the U.S. Senate last month. It would grant undocumented students conditional legal status and access to popular, comprehensive federal loans. Cal Grants, however, would likely fill this need for many low-income families in City Heights under AB 131. The income ceiling that determines eligibility for Cal Grants that cover tuition and fees is as high as $78,100 for a family of four.