As bikes get repaired, Richmond rolls out fixes for city 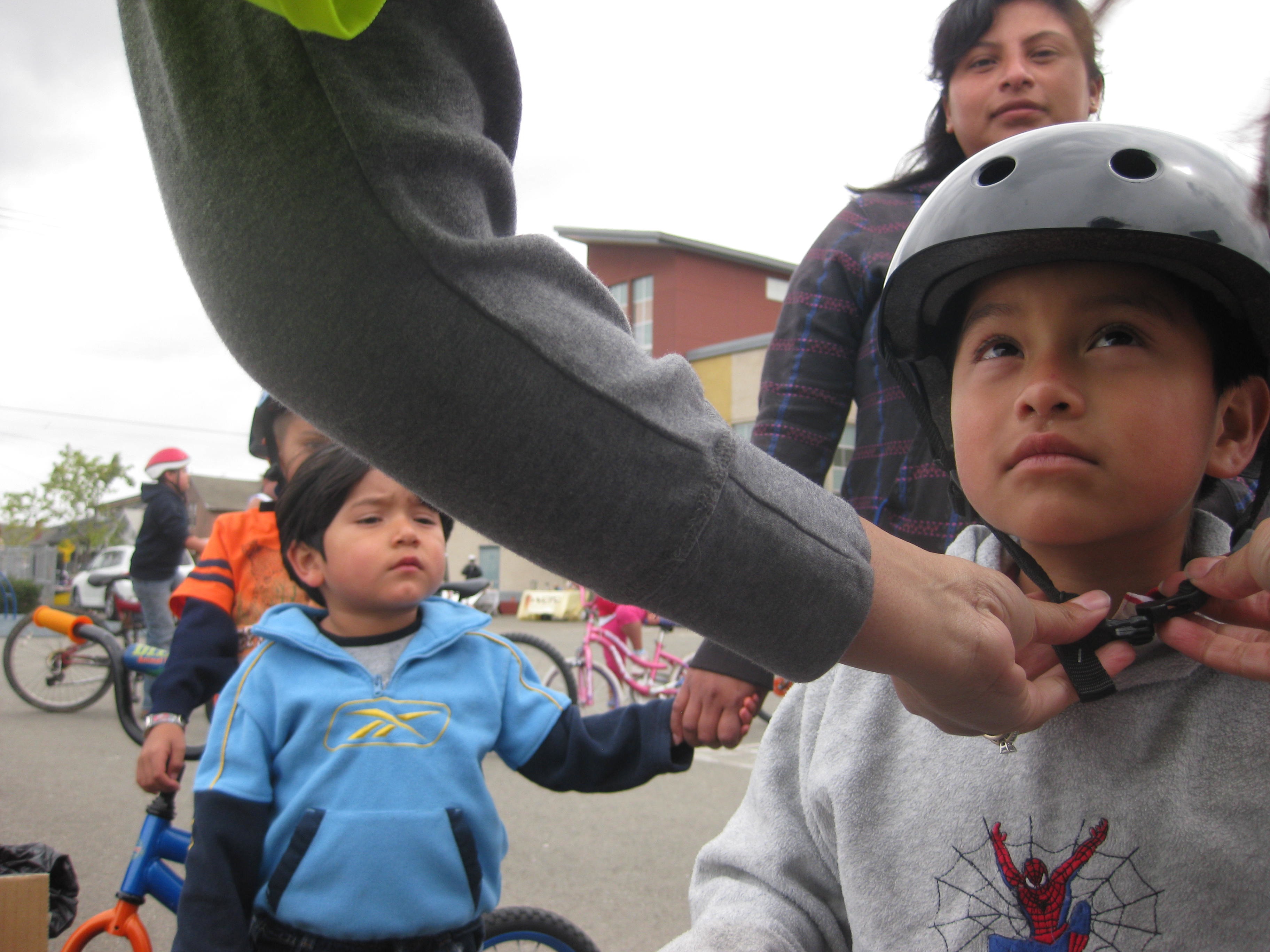 Most outsiders, when they picture Richmond, do not imagine carousels, sound stages, and residents of the Iron Triangle and Coronado neighborhoods gathering with their kids by the hundreds around bicycles. In Richmond, biking is not the popular hobby that it is in nearby Berkeley, where a bike fair would seem almost banal. Richmond hasn’t shared in many of the privileges enjoyed by Berkeley—one of which is bike-safe streets.

But a couple of Saturdays ago, city and county health workers joined with community activists and organizers around just this theme: Richmond’s mission begins with something as simple as more bicycles. They’ve coordinated with the goal of improving the health and wellness of Richmond’s people, and they’re aiming at that goal from many different angles.

The scene at the bike fair reflected this atmosphere of transition in Richmond, as the city remakes itself as a leader in innovative urban planning.

Kids lined up as county health workers fitted them for new helmets, instructing them on bike safety basics like signaling and wearing bright colors. City cops loitered (also on bikes) as volunteer mechanics repaired bikes for all youngsters who came asking.

The city’s multi-level, coordinated design to improve community health has attracted participation from residents and kudos from city planning experts, who note that Richmond succeeds where many cities fail – in implementation of actual plans to change the health status of residents. With a higher chronic disease burden and lower life expectancy compared to nearby cities, the overall health of Richmond residents stands in stark contrast to people who live in nearby Berkeley, yet it leads the Bay Area with a cutting edge plan to improve public health.

The city’s General Plan includes a Bicycle Master Plan, to encourage use of public space, and Richmond’s new greenway, a path stretching from the east side of the city to the shoreline. But Richmond’s public health strategy is sophisticated, focusing more on environmental improvements than traditional public health programs aimed at changing bad behavior.

The city is embracing approaches to health that begin with changing the physical environment around people to confer more social opportunities. City leaders have sought advice from urban planning and health policy experts to cultivate better health outcomes for Richmond.

This notion—of opportunity and social capital as essential elements to good health—is gaining traction in California. Anthony Iton, former director of the Alameda County Health Department and a noted public health advocate, has been referenced in community planning meetings for his reframing of public health in urban settings.

Iton shares the emergent idea that behavior-based models, like pamphlets and seminars encouraging exercise and good nutrition, are ineffective in under-resourced communities. Iton’s position, which he outlined in a keynote speech to the nonprofit Urban Habitat, is that effective public health strategy is “not about changing behaviors, changing attitudes, or even increasing access to health care.” Rather, Iton argues, “Changing the identity of that physical environment may be the most direct way to improve health.”

“Where you live matters,” he has said, “more than anything else. In some instances, more than what you choose to do behaviorally.”

Richmond’s city council is aggressively promoting the Health and Wellness Element of the city’s General Plan, which has the explicit goal of “equitable distribution of park and recreational facilities.”

Richmond is translating Iton’s abstract ideas into action, said UC Berkeley Professor of City and Regional Planning Jason Corburn. Corburn presented research on health disparities and city geography to the city council last month, where he discussed the historic disconnect between urban planning and public health in low-income areas and communities of color. Richmond aims to bridge this gap by creating access paths to parks, the shoreline and other open spaces.

Corburn also works for the California Endowment as an evaluator of Richmond’s Health and Wellness Plan. The Endowment is funding major health initiatives in 14 cities, and Richmond is one of them. Richmond’s detailed public health blueprint, along with strong community engagement, sets it apart from other cities Corburn has analyzed. The city has also hired some people who understand the elements of community organizing, he said, and drive the city government’s proactive involvement with residents.

At the bike fair, Gabino Arredondo of the City Planning Department networked with residents, city officials and media.

“Everyone is working on health and wellness right now,” Arredondo said. “Not just access to health care, which is important, but access to safe streets and to your neighbors—and to healthy activities.”

Arredondo, who also directs the Health and Wellness branch of the city planning department, said the city is embarking on what urban planners call a road diet, a plan to convert four lane streets intended as thoroughfares into two- or three-lane streets with wide bike lanes and more sidewalk space.

“We need to deal with the fact that as policy makers, it’s our responsibility to develop policies around health needs,” said city council member Jovanka Beckles, who is also a mental health specialist in the Contra Costa’s youth psychological services program. Looking around as residents, mostly children, careened around on bikes, Beckles remarked that wellness demands safe streets for kids to play on.

“In communities like Richmond, health is affected by the level of crime,” Beckles said. “People have so many stresses: Am I safe in a neighborhood where there’s a beef going on?”

Three young men died in homicides in less than one week in North Richmond this April, a spate of violence that followed a quiet winter. Such crimes highlight law enforcement’s necessary role in the city’s public health program.

Events like the bike fair, Beckles said, work to curb the tension created by violence. “It’s about getting people out into the streets.”

This idea that lack of opportunity damages people’s health was emphasized in the marathon PBS documentary series “Unnatural Causes,” which featured Anthony Iton. What might have sounded radical or far-fetched twenty years ago is becoming conventional science, like the link between smoking and lung cancer. And the solutions, he said, are not medical.

“The only sustainable approach to eliminating health inequities,” said Iton in his keynote speech, “is through the design of intensive, multi-sectoral, place-based interventions.”

The bike fair effort, which owes much to the nonprofit coalition Building Blocks for Kids, seemed to be a successful example of such interventions. Between 300 and 400 people came out to Lincoln Elementary School’s sprawling blacktop.

While the larger purposes of environmental justice and social equity hovered in the background, bicycles dominated the day. Wheels spun across the blacktop and kids barked.

“The City of Richmond does not have a single bike shop,” said volunteer bike mechanic Brian Drayton, who founded the not-for-profit Richmond Spokes. He looked up from the bike he was working on.

“Look around,” he said, referring to all of the kids waiting to get their bikes fixed. “There’s tremendous need.”

As bikes get repaired, Richmond rolls out fixes for city