Teens talk to their town about sugary drinks 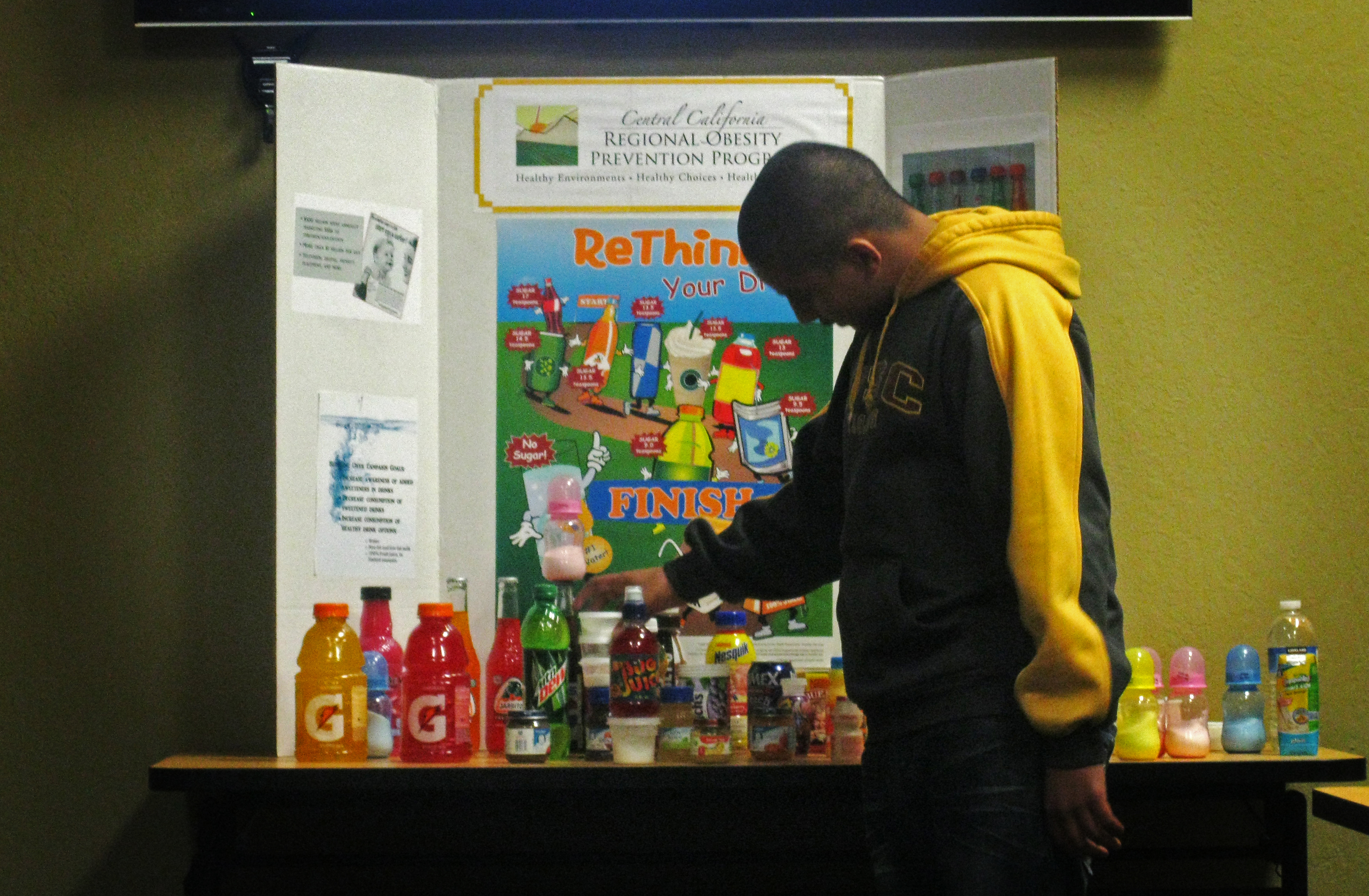 Childhood obesity is a big problem in Merced. A group of local teens are doling out a dose of reality about the link between sugary drinks and obesity to parents and children—and talking about a proposed remedy. The teen group wants to educate locals about a soda tax introduced in the Assembly this February.

Six young adults are spreading the word about why children should swap soda for water through a prevention program funded by a Project Lean grant, won by the Central California Regional Obesity Prevention Program. Although the agency was responsible for securing funds, Claudia Corchado, CCROPP’s local program manager, said this is definitely a youth-driven project.

The group members know what it feels like to be a kid lured by sweet drinks. “That actually used to be my favorite drink,” group member Christian Belton, 13, said of Mountain Dew. “I’m really going to cut down on soda now that I know how much sugar it has.”

The youth leaders debuted the project at the Merced County Children’s Summit, an annual event where youth meet with organizations and agencies that serve young people.

“Can you guess which drink has 19 teaspoons of sugar in it?” asked teen leader Gloria Martinez, 18, holding a container filled with white sugar to people passing by her table. Lined up on the table were various colas, bright orange and red sodas, juices, flavored milks, sports drinks in neon colors and even baby food and formula. Few people guessed right.

“You know I would usually reach for this instead of a soda because I thought it would be better,” said parent Sue Troncoso, 33, holding the pink Sobe drink with its 19 teaspoons of sugar in her hand.

Educating parents is important, but the group has another big goal. They want to influence the system that provides easy access to these drinks.

The youth group will soon start door-to-door visits to Merced’s state representatives who could consider, they think, curbing soda consumption by taxing it.

Assemblyman Bill Monning (D-Carmel) introduced the soda tax, AB 669. The proposed legislation is currently awaiting a hearing in the Committee on Tax and Revenue. If enacted, the soda fee will charge one cent for every ounce of sugar-sweetened beverage sold in California. The tax could generate $1.7 billion for obesity prevention programs.

The money raised comes back to the community to help fight childhood obesity, Corchado said, and the amount of money each community gets back is based on their rates of soda consumption.

Merced youth consume more than the statewide average of sodas per day. According to the 2009 UCLA Center for Health Policy Research report “Bubbling Over: Soda Consumption and its Link to Obesity in California,” 61.9 percent of kids ages 2 to 17 drink one can of soda or more per day in Merced, the highest out of any city in California. The statewide percentage is 49.4.

In Merced County, 37 percent of youth ages 12-17 are already at risk of being overweight, 8.9 percent are already overweight according to the new 2009 California Health Interview Survey.

It’s important to remind people about the health hazards of being overweight or obese, Corchado said, including diabetes and heart disease.

“(The fee is) basically going to create a children’s health initiative so that we could provide additional resources for after school programs, for children’s sports,” Corchado said.

The group is prepared for some pushback from community groups, like sports leagues, that rely on the sales at concession stands to help pay for their activities. They’ve also listened to criticism from beverage industries and the public about the tax.

“All people are seeing is one additional fee,” Corchado said. “But what is not being said is what is going to happen to these fees that are being generated. It’s really coming back to support our children and our community.”

Those statistics also prompted the teen group to reach out to adults who can influence healthy drinking options at an early age. It is hard, Corchado said, to walk around Merced without spotting a child with a bottle or sippy-cup filled with soda.

Through a First 5 Merced County mini-grant, the teen group will speak with childcare providers, head starts and parents about the dangers of soda.

The teen group said their goal is to get adults to realize that they do have control over the obesity epidemic in children. They want pledges from parents, preschool directors and coaches saying that they’ll make sodas less available to kids.

Teens talk to their town about sugary drinks