A pricey investment in community health and wellness 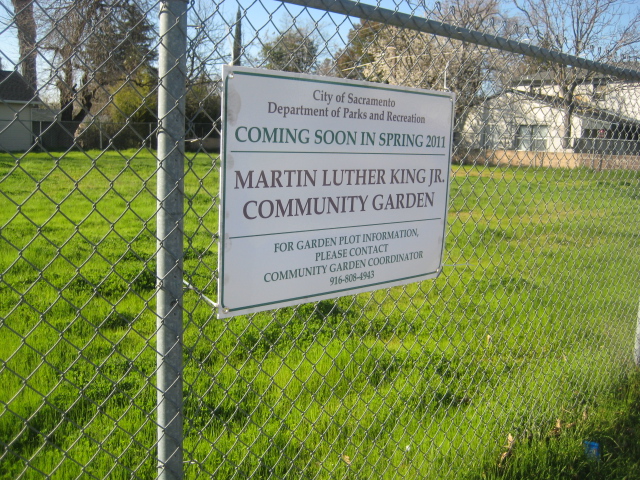 After two years of pressure from community leaders and residents hoping to “grow their own groceries”, the city of Sacramento will finally break ground this April on a half-acre, 32-plot community garden in the Oak Park neighborhood southeast of the central city.

In exchange for a $50 plot fee, residents will soon be able to grow up to $600 worth of fruits and vegetables, estimates Bill Maynard, Community Gardening Director for Sacramento Parks and Recreation.

“We [the community] drove this process,” Joany Titherington, manager of the Oak Park Farmer’s Market and board member of the Oak Park Neighborhood Association said. “By attending Sacramento Housing and Redevelopment meetings, City Council meetings, and organizing with fellow residents, we ensured that the garden moved forward in a meaningful and impactful way and allowed for greater access to affordable fruits and vegetables in our neighborhood.”

But while the garden may be cost-effective for gardeners and residents, it is far less economical for the City of Sacramento. According to City officials, the total cost of the garden is between $200,000 and $250,000, funded primarily through tax increment funds and State Quimby funds (State tax money specifically designated for parks and open spaces).
“This is a great project, but it seems like that money would have been better spent on multiple smaller gardens instead of one large, extravagant one… but when the City gets involved everything becomes super expensive”, Josh Cadji, Oak Park Resident and founder of Sacramento League of Urban Gardeners (SLUG) said.

Oak Park, like many communities throughout California, is considered a “food desert” meaning there is an abundance of unhealthy food outlets and a shortage of grocery stores or other healthier food options. Gardening and increased access to fresh fruits and vegetables could help reverse some of the historic and systemic health inequities in the area, which for many community members is a priceless opportunity.

“All people in our community deserve to experience the joy of growing food…gardening is as much a spiritual process as it is a way of meeting people’s basic needs, ” Titherington said.

Yet considering that the cost of the garden is nearly three times the area’s median home value, some residents question whether the City’s approach to healthy food access is the most cost-effective way to meet the community’s needs.

“It may not be the most economical garden, but at least the city is choosing to prioritize food justice instead of appropriating even more funds to the construction of new freeways or something of that nature,” Cadji said.

Since the Sacramento Housing and Redevelopment Agency donated the land for the project, the City’s entire $250,000 budget went into design and legal fees, labor and construction costs, raw materials, and irrigation.

“I don’t think that a garden needs to cost $250,000 – that’s just a bit much,” Titerington said. “The city should do more to seek out matching resources in the community – there are a lot of options out there that would cut cost and allow us to do more with less funding.”

Titherington points to the fact that the City still owns several vacant lots throughout the neighborhood and said she would like to see more of the City’s money go to smaller, more community-managed gardens in the neighborhood.

But the City argues that by institutionalizing the garden within a government department, it ensures the continued operation and support for the project for years to come.

“If we want the gardens to be around for a long time and not disappear, we need to make it part of City Parks Department…that way it won’t go away in a few years if another development decides to move in or if a grant loses funding,” Maynard said.

Maynard also explains that while the initial cost to the garden may seem staggering, the maintenance cost is virtually zero.

“Yearly maintenance for traditional small parks can cost between $10,000 and $15,000 and large regional parks cost upwards of $100,000 per year so in comparison, gardens are very affordable for the City,” Maynard said.

As part of their commitment, gardeners are required to prune shared fruit trees, maintain the granite pathways, and take care of the perimeter, meaning that the City does not have to pay for costly landscaping and groundskeeping.

Ultimately, residents and community leaders think of this garden as just one more step in a long process of addressing food access and healthy living.
“Through community gardens, backyard gardens, farmstands, and farmers markets…we are changing people’s relationship with their food and allowing people to live a more healthful and satisfying lifestyle,” Titherington said.

A pricey investment in community health and wellness