Immigrant Latinas get course in leadership 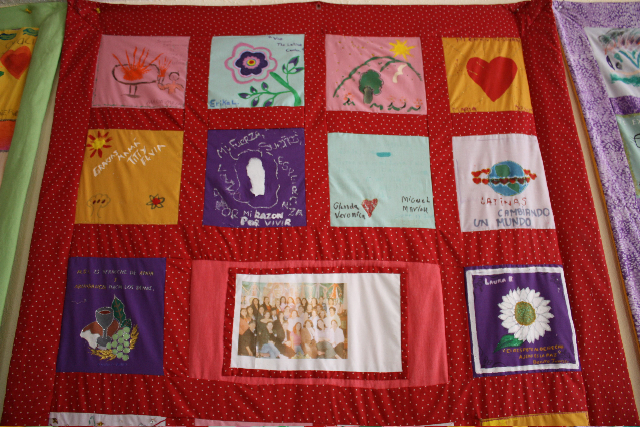 Walking into the classroom of Richmond’s Latina Center intimidated Maria Lourdes Sanchez. The other Spanish-speaking women in the room, who also came to develop their leadership skills, were welcoming. But Sanchez was still afraid.

For years, her husband told Sanchez, 35, that she wouldn’t amount to anything. But the mother of three kept attending the leadership classes. She kept raising her hand and voicing her opinion. She noticed her talents for giving presentations in front of a crowded room or drafting a budget proposal.

The Latina Center’s leadership program—Mujer, Salud y Liderazgo, or Women, Health and Leadership—teaches immigrant women like Sanchez how to build their self-esteem while developing marketable job skills. The trainings are done entirely in Spanish. About 350 Latinas have graduated from the program since its inception ten years ago. This year, 34 women are in the program.

“When the women go through the program, it’s like they are discovering themselves,” said Miriam Wong, the founder and executive director of The Latina Center and an immigrant from Peru. “They’ll realize, ‘where have I been all this time?’” Wong said she’s seen how the 12-month curriculum has changed women’s lives.

The women go through a series of workshops and classes ranging from personal development– how to eat right, building self-esteem—to career development, like learning power point and developing fundraising plans.

On a recent Saturday, seven women met to prepare for a trip to Sacramento to meet with policy makers. They studied the legislative process, considered the responsibilities of voters, and learned how to dress when they meet policy makers.

“Cuando vallamos al capitolio deben vestirse conservadoramente,” said Alejandra Escovedo, one of the program graduates. When we go to the capitol, you must dress conservatively.

Each participant in the leadership program creates a project designed to help her neighborhood. This year, three women will focus their projects on health. One of the projects, lose 10 pounds with Zumba, will focus on maintaining a healthy weight by offering a free exercise class based on moves from salsa, merengue, Hip Hop and samba. Another woman is working on informing women of the benefits of using non-toxic cleaning supplies to clean the home, and a third is developing a project where a group will go from door-to-door and speak with women over 40 on how to detect breast cancer early.

The Latinas who arrive at the Center have a lot in common: all are immigrants, some don’t speak English and some have never worked outside the home. About 90 percent of the women who come to the Center have experienced domestic violence, Wong said.

“Muchas no saben manejar. Muchas no tienen papeles,” Wong said. Many don’t know how to drive. Many don’t have documents. Those barriers prevent many from seeking help, Wong said.

Escovedo, 38, said these immigrant women, finding themselves alone and isolated from their families who are in their home countries, will suffer in silence, too ashamed to tell strangers their situation.

Some are too afraid to speak with police or a social worker for fear that their legal status might be questioned. In some cases, the abuser will intimidate them into silence.

French said police have been working with Contra Costa County advocates to help dispel common myths. A police officer, French said, will not ask a victim of domestic violence about his or her legal status.

“That question does not come up,” said French.

Sanchez’s case is typical. Her husband would become verbally abusive toward her when he was drunk. One day, she noticed that one of her sons was imitating his father’s temperamental moods.

“He started yelling at me that he didn’t like his food. He was acting just like his father,” Sanchez said recently at the Center. She took the boy to a therapist. She was referred to Wong’s group.

Wong says the program grew of out this kind of necessity.

“It’s a way of giving them a hand, so they can begin taking steps on their own,” Wong said.

Each of these women comes to their classes ready to lead, even if she doesn’t know it yet. “Latinas in the U.S., they have already overcome many barriers,” Wong said. “They’ve left their families in their homeland to find a new opportunity here.”

Developing women’s leadership skills helps their children, their partners and their communities, said Wong. Immigrant Latinas are the glue that binds family and community, Wong said. Part of what they bring with them to U.S. is strong connection to family, and even stronger hopes of seeing their children succeed.

Latinos make up 35 percent of the population in Richmond. According to the five-year estimate of the American Community Survey, the foreign-born population is 32.1 percent, compared to 26.8 percent in California.

The graduates from the leadership program have hailed form Mexico, Guatemala, El Salvador, and Honduras. They have gone to work as community organizers, peer leaders and have created their own businesses.

The hand-made quilts hang on the walls of the center’s garage, which doubles as a meeting space, created by graduates of the leadership program. Each square tells the story of one woman. Some have embroidered flowers, others have messages dedicated to the person who has helped them become stronger, and still others have drawings of a peaceful vista.

“Madre gracias por todo tu amor,” reads one. Mother, thank you for all your love.

Sanchez went through the program, got a job, and found the support she needed to find a safe home for her and her three young children. She returned to the Center to help other victims of domestic violence.

“I know that it can be a lot of suffering,” said Sanchez, who is the Center’s program assistant for the parenting classes. “I get a lot of satisfaction when I see a woman succeed and get her children ahead in life.”

Immigrant Latinas get course in leadership