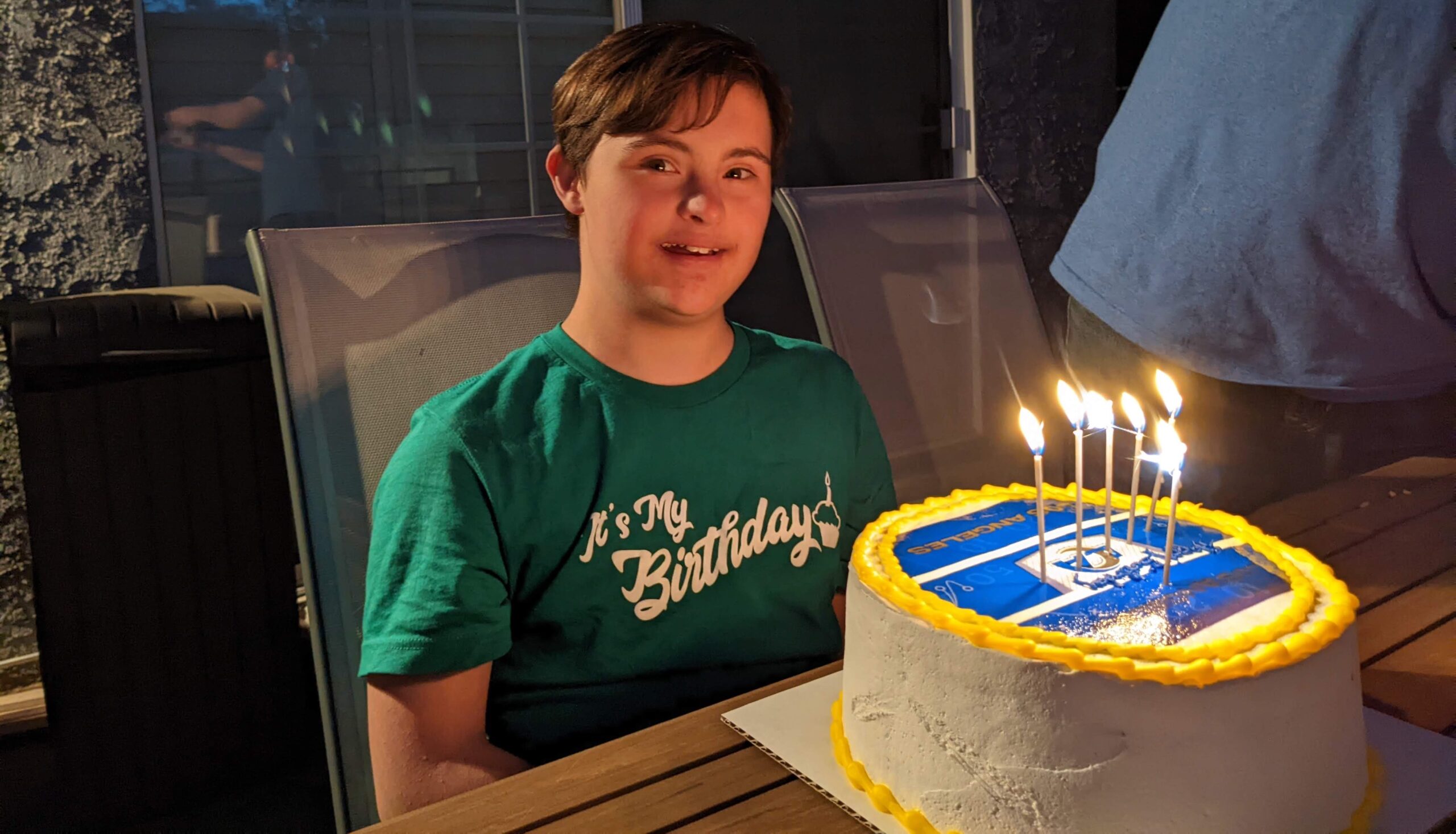 Tyler celebrates his 15th birthday with his parents and grandparents. Photo courtesy of Carrie Wetsch.

Tyler celebrates his 15th birthday with his parents and grandparents. Photo courtesy of Carrie Wetsch.

Tyler Wetsch dreams of hosting his own YouTube channel.

Like many teens his age, the 15-year-old loves to watch videos on social media and leave comments on his favorites.

But Tyler has Down syndrome and attention-deficit/hyperactivity disorder, so his parents want to give him additional safety training before he spends unmonitored time online. It seems like a simple enough request, his mother, Carrie Wetsch said. But due to COVID-19 and the legacy of deep state budget cuts, actually enrolling children and adults with developmental disabilities in life-skills trainings and recreation programs like summer camps often takes tireless advocacy. The result is a segregated system where Californians with resources or who live in the right areas can access these programs, while many others — particularly those who are low-income, living in rural areas or are from families that speak a language other than English — may go without.

Tyler is lucky to live near Harbor Regional Center in Torrance, which offers an array of services for children and adults with developmental disabilities. For Wetsch, the center has been a one-stop shop — “a huge help” to determine appropriate services available for Tyler. But it can still be a challenge to obtain some of those services, she said, and she’s not alone.

That’s especially the case with the newly reintroduced social and recreational services, also called “social recreation” or “social rec.” The state cut funding for these services 13 years ago, which meant regional centers — service coordination centers for children and adults with certain developmental disabilities — could no longer pay for summer camps, swimming lessons and other recreational programs for the people they serve. Now the centers have to figure out how to reinstate them, which has led to glitches for families trying to access these services, Wetsch and others familiar with the regional center system said.

“There are some services other regional centers provide that Harbor decides are not appropriate,” Wetsch said. “In the past, I’ve been angry and stomping around.”

Wetsch has found a social media safety training for Tyler to take this summer, thanks to years of experience advocating tirelessly for her son. In the past, the regional center has denied some services. But Wetsch worries that other families with less advocacy experience and resources may have trouble as they try to access the newly funded social and recreational benefit.

All children should be able to access recreation programs regardless of their abilities, disability rights advocates say. California restored funding almost a year ago for social-rec programs, and regional centers are legally obligated to fulfill that commitment to children with developmental disabilities, said Jason Lehmbeck, CEO of a support network for families raising children with disabilities called Undivided, and parent of a child with developmental disabilities.

“I want people to understand there are problems blocking these kids to have access to something that’s a right — something to help them and their families thrive,” Lehmbeck said. “And these services become super critical in the summer.”

Social recreational offerings differ from other center services, and for the past two decades, many programs once provided through the state’s regional centers have been cut due to lack of funding. In 2009, during the Great Recession, the state eliminated funding for them. Then in July 2021, a $19 million infusion to the state budget gave regional centers the ability to fund, for children 3 to 17, social recreational services, camping, educational services and “nonmedical therapies,” such as horseback riding, swimming lessons, art classes and sports leagues. However, many families have said they are still struggling to access these programs or are not sure how to go about getting them.

Research has long shown that non-white families in particular do not receive the same level of services through California’s regional centers as white families. The state has spent $66 million on addressing this inequity, but a report released in May by the nonprofit legal firm Public Counsel found that disparities in spending persist, particularly among Latinx and Asian children, and those who identified as being of “other ethnicity.”

In general, many parents struggle to cobble together camps and activities for their children in the summer, but for parents of children with disabilities, the choices are few and far between. Experts say this is a health equity issue because these families often end up without summer opportunities for children to continue to grow and develop. They miss out on peer connections, enhancing their social skills and physical activity that benefits both body and mind. For families with limited resources, sometimes due to structural racism or income inequality, the effects can be even more acute.

For example, a study from the National Academies of Sciences, Engineering, and Medicine found that for low-income children, a lack of access to healthy and stimulating summertime experiences can lead to “worse health, social, emotional, academic and safety outcomes.”

One of the key problems is that because many programs went without regional center funding for so long, they went out of business, said Lehmbeck, who lives in Los Angeles. Now that the state is funding the programs again, regional centers are struggling to locate vendors to staff and provide programs.

“You can’t create vendors out of thin air after 12 years of a lack of budget,” Lehmback said.

That’s challenging because social recreational programs offer the chance for kids to do what they’re passionate about, he said. “They can play as freely as they want, connect with other kids and peers in a safe environment, and build those social, collaborative and self-advocacy skills,” Lehmbeck said. “Social interaction is a big driver of development for kids.”

The reintroduction of social and recreational programs coincides with the launch of a new system available to regional center clients called the Self-Determination Program. Under the program, families are assigned an individual budget and can choose from a long list of services they want for their child. They can also choose a service provider who isn’t a regional center vendor – which means that even if their center doesn’t have an approved vendor for a recreation program they want, the family can find their own. In the traditional system, services are delivered by vendors already sourced and approved, which limits families’ ability to obtain the social rec program they want.

“We’ve seen some regional centers be more proactive, go the extra mile and be more flexible with parents who identify a program,” Lehmbeck said.

For example, California Health Report found that Central Valley Regional Center places great emphasis on new social rec services, with a wide variety of offerings, explanations and a welcoming outreach to new vendors. That’s not the case with an informal search of a few other centers, such as Alta California Regional Center which doesn’t appear to put the same emphasis on the summer programs.

Wetsch and Tyler have used their budget allocation under Self-Determination to sign up for social media safety training with an outside vendor the family has known for years, and to enroll him in camp this summer. Under the traditional system, Tyler wouldn’t be able to do the training, and the Wetschs would have to pay out of pocket for summer camp because his regional center doesn’t have approved vendors for these services.

Iris Barker of La Mirada requested the Self-Determination Program for her 8-year-old daughter, Kayla, who also has Down syndrome. Kayla has been a client of West Side Regional Center for six years and was recently approved with funding for swimming and gymnastics. The center didn’t ask how much Kayla liked these activities and allocated a specific budgetary amount, Barker said.

The problem is, Kayla didn’t want to do gymnastics. Thanks to the Self-Determination program, Barker was able to sign Kayla up for piano lessons instead — something that couldn’t have been accomplished under the traditional system. Barker says Kayla’s brother plays piano, and that her daughter “is definitely interested and also loves music.”

Barker works for Undivided as an independent facilitator, which means she advocates for regional center clients, helps them access services.

“It can be very confusing for families,” Barker said. “It’s important to know what to request and how to request it, and to not take ‘no’ for an answer.”

Brian Winfield, the Developmental Services chief deputy director of program services said centers “are attempting to get the word out about social recreation and camp services and are doing the best they can in that area.”

“If a regional center denies a service, the family has a right to appeal,” Winfield said, noting that the agency wants “to be more inclusive in the way we provide services.”

He said the California Department of Developmental Services is also working to make sure families from all backgrounds get information about social and recreational programs. He has heard from some families of color, such as those that are Latinx, Black, African American and Asian, that they don’t feel regional centers are welcoming.

“We know messaging is something regional centers need to look at differently,” said Ernie Cruz, the agency’s deputy director in the communication services division

Cruz said getting summer camps up and running may take time — it’s been more than a decade since these services were offered — and a lot of places don’t yet have capacity to ramp up to service increasing numbers of participants.

“What’s available can vary by region,” Winfield added, noting that social recreational activities are “a work in progress — not fully up and running yet.”