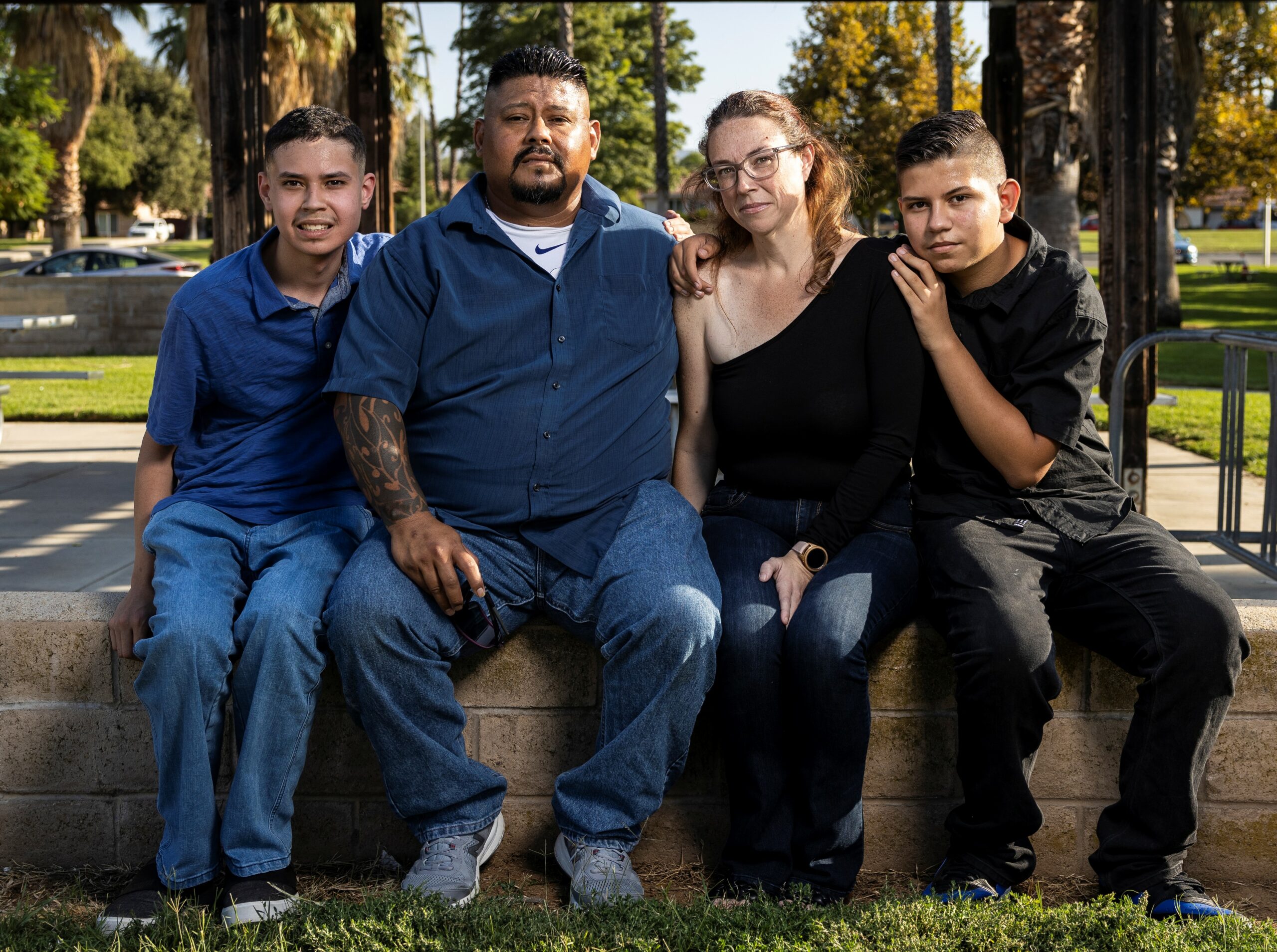 At first, Ethan Martinezes’ parents thought his persistent high fever was some kind of temporary virus or infection. The doctor thought so too, and prescribed the 8-year-old antibiotics.

But within weeks, the normally easygoing and active child was behaving strangely. Ethan cried while playing baseball, a game he’d always loved, started getting in trouble at school, and would get suddenly angry for no reason. Early puberty, his doctor suggested.

Then came the seizures. First Ethan’s legs would start shaking uncontrollably. Then his entire body seized. Ethan’s parents, Erin and Gabriel Martinez, rushed him to the emergency room near their home in Perris, in Riverside County. Finally, after several ER visits, he was admitted to Loma Linda University Children’s hospital near San Bernardino, where he was diagnosed with anti-NMDAR encephalitis, a dangerous autoimmune disease that causes brain swelling. The Martinezes watched their once-healthy son lose his ability to speak, walk, eat and remember.

Every day on his way home from work as a truck driver, Gabriel Martinez, would sob.

Having a child with a chronic illness or disability is emotionally devastating for many families. For the Martinezes, Ethan’s illness brought tremendous worry and stress. The parents struggled to hold their marriage together as they grappled with the intensity of suddenly caring for a child with special needs. Their younger son, Nathan, who was 6, also struggled with the change.

And for Ethan, the illness impacted both his physical and mental health. He had to relearn how to walk, eat and go to the restroom. He still struggles to talk and has seizures. The brain swelling led to long-term developmental delays and behavioral problems, including angry outbursts.

Then hospital medical staff suggested the family enroll in a therapeutic program called Mastering Each New Direction, or MEND. Run in collaboration with the hospital’s Behavioral Medicine Center, it’s one of the only programs in the state that provides mental health treatment specifically for children with chronic medical conditions and their families.

Children and parents attend the program for three hours, three times a week over about two months. Kids receive group therapy with other children, with their family, and in groups of families. They may also receive individual therapy. The program also teaches parents how to cope with the stress, fear and guilt that often accompany having a child with a challenging illness.

Research on the program demonstrates its impact. One study of 22 families enrolled in MEND found that their reported health and wellbeing after completing the program increased around 76 percent. Children were less likely to end up back in the hospital, and the number of missed school days dropped from an average of 12 a month to just two. A later study published in 2016 found that children who completed MEND had lower levels of stress hormones in their bodies, an effect that remained three months later. Screenings revealed that their brain functioning and mental health improved too.

“Their shoulders change,” said Brian Distelberg, who runs MEND and is the director of research at the Behavioral Medicine Center. “They’re all stressed when they come in. They’re more relaxed and comfortable when they’re leaving.”

About a quarter of children in California have a chronic health condition. These include genetic disorders, birth defects, developmental delays, diabetes and asthma. The rate is even higher among children of color, due to systemic racism that impacts the conditions in which these children live and grow.

Research shows children with chronic illnesses are at least twice as likely as healthy children to develop a mental health disorder. They’re at higher risk for neglect and abuse. Their caregivers and siblings are also at increased risk for mental distress.

Yet there are few mental health treatment programs that cater to the needs of these children and their families.

“It’s kind of overlooked,” said Distelberg. “We always think of (these children) as, they have this physical health condition and we can really get behind that. But oftentimes what comes with that is all these additional stressors for the individual patient as well as the family system. Everything from the stress of just trying to deal with (the illness), to the financial stress that often comes with physical health challenges.”

Children with chronic medical conditions often suffer multiple blows to their mental wellbeing, said Daniel Tapanes, a psychotherapist who designed the MEND program and now helps coordinate it. Children have expressed feeling like they’re “broken,” a burden on their families, or that they don’t belong because they look different from their peers or can’t participate in activities such as sports, sleepovers and parties.

Teenagers in particular can struggle as they begin the natural process of becoming more independent. It’s common for teens to stop following their prescribed treatment because they want to feel more “normal.” This can exacerbate their health condition and pile stress on the family, Distelberg said.

Meanwhile, some parents are racked with guilt and shame over their child’s illness. Erin Martinez, for example, said she would imagine she was somehow to blame for Ethan’s illness because she had enrolled him in too many after-school activities, or wonder if she could have done more to get him treatment sooner.

It took the Martinez family a couple of tries in the MEND program before they reaped the benefits. Ethan first enrolled at 9 years old, and saw some results. But Erin and Gabriel Martinez said they were too caught up in their own stress and marital conflict to make the changes required of them to support Ethan.

More results came after Ethan enrolled in MEND again last year at age 15. His struggles had increased as he entered his teenage years, and tension in the household was unbearable, Erin Martinez said.

At MEND, which was held online during the pandemic, the therapist working with Ethan figured out that the teenager wanted more time and attention from his mom and dad. She suggested they do more family activities together. One thing Ethan really wanted, she said, was to play catch with his dad.

Gabriel Martinez began taking Ethan out to the yard to play ball after dinner. “By the end of the week, his attitude, his aggression had completely changed,” Martinez said. “I was like, ‘Are you kidding me? Is that it?’”

Meanwhile, Erin Martinez realized she needed therapy too. Her own stress, anxiety and feelings of guilt had become overwhelming. She enrolled in an adult version of the MEND program where she received therapy that helped her learn better coping skills. She and Gabriel Martinez received couples’ therapy as part of the program.

Nathan, 13, enrolled in MEND too. Through therapy, he started to talk about the stress and sadness he’d felt watching his older brother’s health change.

It gives me goosebumps’

Altering how family members relate to each other is a big focus of the MEND program, Tapanes said. By changing the family dynamics, children’s mental health usually improves, he said. Since the program launched in 2009, he and Distelberg said they’ve witnessed numerous children become not only mentally healthier but physically healthier too. They’ve seen kids with diabetes enter the program pale and emaciated from not adhering to treatment, and left with normal weight and blood sugar levels; children who no longer need emergency organ transplants after exiting the program because their body is better managing the disease; and one child gravely ill with lupus who made a full recovery.

“It gives me goosebumps,” Tapanes said.

MEND staff are now training other providers on how to run similar programs in Lake County in Northern California, and Chicago. The program has also been shown to save money for families and health insurers. One analysis found that it reduced spending on direct and indirect medical care by 86 percent. These results highlight the connection between mental and physical health. More medical providers and insurance companies need to recognize this link, Distelberg said.

For the Martinez family, life has improved dramatically. Erin Martinez said her sons now play together without getting angry. Nathan talks to his parents about his day and how he’s feeling. Ethan still gets angry and upset at times because of his brain injury and difficulty communicating, but his family has learned what triggers him, and to redirect his emotions by playing catch or a board game. The mental health treatment has also led to better physical health for Ethan, resulting in fewer hospitalizations

And Gabriel and Erin Martinez have gone from the brink of divorce before joining MEND to talking about renewing their marriage vows, Erin Martinez said.

“This program saved our family,” she said.