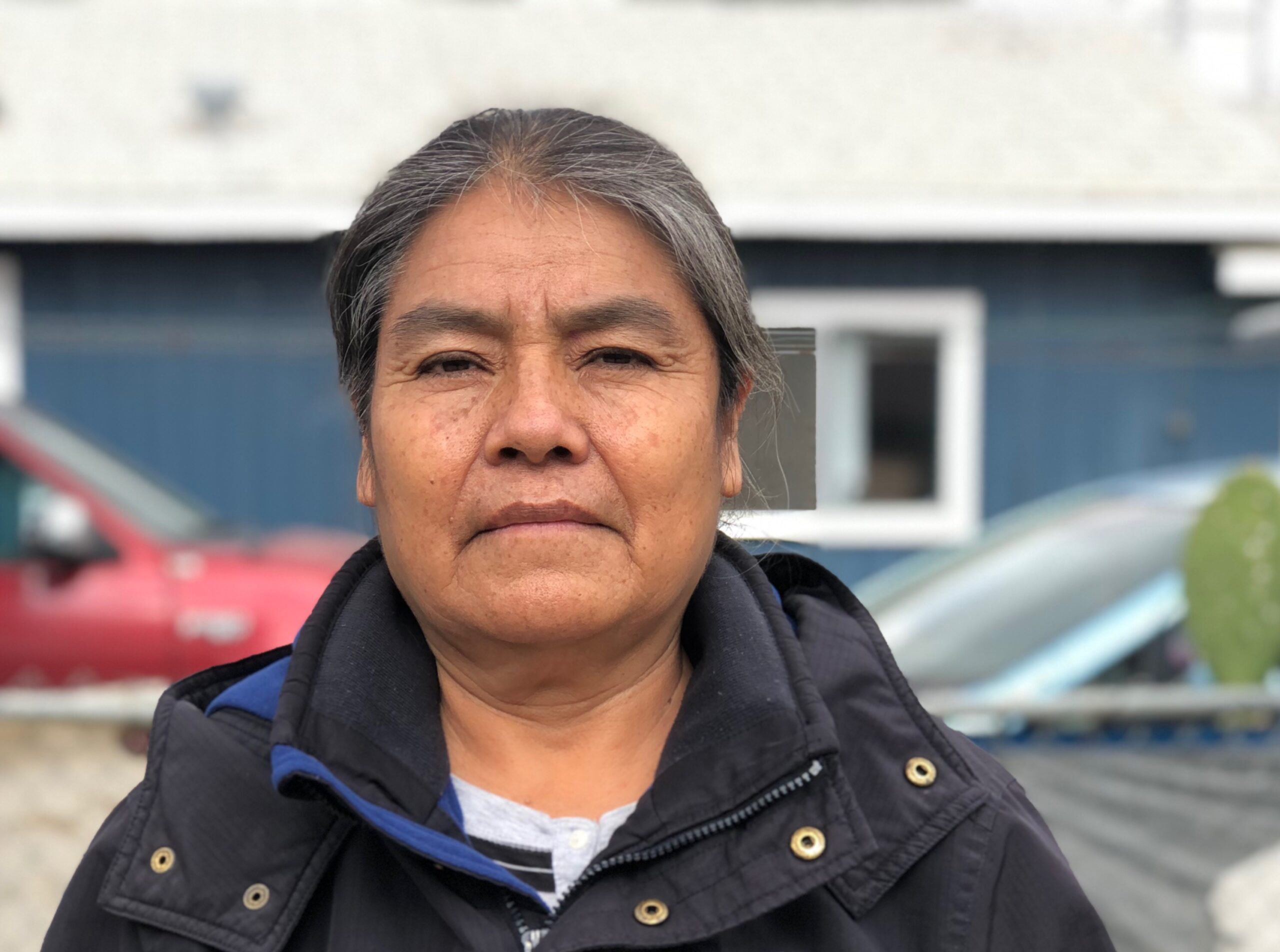 After her husband was hospitalized with COVID-19 in January, Mixteco speaker Marcelina Hernandez Lopez of Arvin struggled to find out what was happening to him because the hospital didn’t provide interpretation. Photo by Fausto Sanchez.

Hospitalized For COVID-19 Without Information: What Californians Who Speak an Indigenous Language Often Face

After her husband was hospitalized with COVID-19 in January, Mixteco speaker Marcelina Hernandez Lopez of Arvin struggled to find out what was happening to him because the hospital didn’t provide interpretation. Photo by Fausto Sanchez.

Juan Ernesto Hernandez knew he was in the hospital with COVID-19.

But he and his wife, Marcelina Hernandez Lopez, had so many questions. What medications was he being given? How was the virus affecting his body? And, most importantly: Would he survive?

No one at Mercy Hospital Southwest in Bakersfield spoke the couple’s language, Mixteco, an indigenous language from southern Mexico. Hernandez, 62, didn’t know he had the right, under state and federal law, to request an interpreter, and the hospital didn’t offer him one.

His wife was beside herself. “I feel a lot of sadness in my heart, because I don’t know what’s going to happen to my husband, and I don’t know what his condition is,” she said through an interpreter on Feb. 19, as her husband lay in a hospital bed. “He’s suffering a lot in that place … He tells me people come and give him injections, he wants to know what they are, but he doesn’t understand.”

Two weeks passed. Still no information from a doctor or nurse in a language Hernandez could understand. He had been transferred to another hospital, but his wife didn’t even know the name because she doesn’t understand English.

Tens of thousands of Mexican and Central American immigrants in California speak Mixteco and other indigenous languages. Like the Hernandez’, many don’t speak or understand Spanish well. These immigrants, who work mostly in agriculture and other essential jobs, have long struggled to get medical information and services in their languages, despite laws requiring medical facilities to offer interpretation in-person or through a dial-in service, advocates said. Now, with COVID-19 disproportionately impacting these immigrant communities, the language disconnect is creating major challenges for patients and their families as they try to navigate virus-related medical care.

“It creates a lot of stress — not understanding the procedures, worrying they’re going to die, and not knowing what’s happening with their health, or what the doctor’s opinion is,” said Arcenio Lopez, executive director of the Mixteco Indigena Community Organizing Project (MICOP) in Ventura County, home to an estimated 20,000 people who identify as Mixtec.

“There’s more risk of medical negligence when there is no clear communication between the patient and the providers,” he continued. “They might be treating something different they think the patient has, but the patient might have important information about their own body or health.”

Indigenous Californians have had difficulties getting information in their languages throughout the pandemic. At testing sites and medical facilities, there is often no translation available, according to community organizers. At MICOP, people have turned up at the organization’s offices in Oxnard asking for help translating their COVID test results, potentially exposing staff members to the virus, Lopez said.

In Monterrey County, the Centro Binacional para el Desarrollo Indígena Oaxaqueño (CBDIO), which serves indigenous immigrants from the Mexican state of Oaxaca, noticed community members were struggling to get tested for COVID-19. Staff members called 15 testing sites in the county’s farmworker-heavy Salinas Valley to ask if they offered Mixteco interpretation. Only one said yes.

“We understand that these are dire times and our health care system is also struggling with the pandemic in general. But the pandemic has continued to highlight all these issues about our community accessing services,” said CBDIO Executive Director Sarait Martinez.“Literally in these times it’s a life and death situation.”

Part of the problem is that indigenous language speakers often don’t know they have a right to ask for an interpreter.Some bring an English or Spanish speaking family member to appointments. But in medical situations, it can be hard for that person to interpret complex medical terms, especially if the family member is a child, as is often the case, said Marisa Christensen Lundin, legal director of an outreach and legal advocacy program for indigenous immigrants at California Rural Legal Assistance in Arvin.

The situation “is just so accepted that no one comes in to complain about it,” she said. Yet, “I could call any one of my 90 clients right now, and I can promise you that none of them have received interpreters at the hospital.”

People have a civil right under federal law to access services in their language if the agencies providing the service receive federal funds, which most health care facilities do. Providers can meet these requirements by training bilingual staff or contracting with trained, qualified interpreters such as through a telephone service or community organization that provides professional interpreting services. Translation of important medical documents is also required, depending on the size of the population that speaks that language. California has its own anti-discrimination laws that also require agencies to provide interpreting and translation services if they receive state funds, such as through the Medi-Cal health insurance program.

“All of our hospitals provide those services,” she said. “California is a large and very diverse state with lots of languages that are spoken, and hospitals make arrangements to make sure they have language services available to meet the needs of their communities.”

In an emailed statement, Chad Burns, a spokesman for Dignity Health, which Bakersfield’s two Mercy Hospitals are affiliated with, acknowledged the lack of Mixteco interpretation at the hospitals.

“While our interpreter service provider includes more than 200 languages to assist patients and staff when there are communication barriers, some languages such as Mixteco are not included,” the statement said. “We recognize the challenges this poses for our Mixtec patients and their families, and we are evaluating how we can expand our interpreter services for our culturally diverse community.”

Data on the number of indigenous language speakers in California is scarce, which may be one reason this population gets overlooked, Lundin said. Providers may also erroneously assume that patients speak Spanish because they’re from Latin America. Even when indigenous language speakers do ask for an interpreter, they frequently don’t get one, or the interpretation is inadequate, advocates said. Mixteco, the dominant indigenous language in California, has several variants that are mutually unintelligible. A patient may be matched with an interpreter who speaks the wrong variant, rendering the service useless. And commercial over-the-phone interpretation companies, which many hospitals use, often don’t have Mixteco interpreters available at all times of day, Lopez said.

On other occasions, interpretation services are available, but hospital staff aren’t trained on how to access them, Lopez added. He cited a recent example in which a Mixtec woman reported visiting two hospitals in Ventura County that have contracts with MICOP to provide interpretation, but she still didn’t get an interpreter.

The situation is exacerbating mistrust in the health care system, Lopez and others said. Maura Salazar, 66, a Mixteco speaker who lives in Lamont, said many people she knows have avoided going to the hospital even when they’re very sick with COVID-19 because they’re worried no one will understand them or they won’t be treated well.

“They were afraid to go because of a rumor they wouldn’t get out,” said Salazar through a Spanish speaking interpreter. “They say there are interpreters in the hospital that speak Mixteco, but they don’t speak the same version, and that’s another problem.”

Salazar herself went to hospital because of COVID-19, but said she wasn’t offered an interpreter, even though she would have liked to have one.

Other non-English speakers are also struggling to get intelligible information and services during the pandemic. Justice in Aging and the Center for Medicare Advocacy recently filed a lawsuit on behalf of two community-based organizations in Los Angeles that work with older adults who speak limited English. These organizations have seen a surge in seniors who speak Chinese and other languages seeking help booking COVID-19 vaccine appointments, according to the lawsuit. The plaintiffs blame a rollback of language access protections by the Trump administration, which they believe has led to vaccine sites and online information portals not informing people of their right to interpretation. This has led to incidents such as a Cantonese vaccine recipient not realizing she had to go back for a second shot because the post-care instructions were only in English, said Denny Chan, Justice in Aging senior staff attorney.

Even Spanish speakers have struggled to obtain vaccine information. Rosa Lazarovits, a Ventura-based marriage and family therapist who works mainly with Latinx seniors, said many of her patients have expressed panic over not knowing how to get vaccinated. The county does have an online portal with vaccine information in Spanish. But many seniors don’t know how to navigate the internet, she said.

“They’re very stressed out,” said Lazarovits. “I see and hear a lot of stress and a lot of anxiety, not just because of COVID, but because of the lack of information. It’s like a double whammy.”

To ensure people with limited English proficiency get the information and care they need during the pandemic and beyond, health care systems and government entities need to step up collaboration with immigrant community groups to get the word out about public health issues, Martinez said. Her organization is planning a campaign focused on educating hospitals and health care providers about their legal responsibility to provide interpretation, and to inform indigenous language speakers of their right to request an interpreter.

Hospital administrators need to plan in advance how to provide interpretation for languages such as Mixteco, by identifying the variants spoken in the local area, and partnering with community-based organizations to find appropriate interpreters, said Christensen Lundin. Hospital staff must then be trained on how to summon the right interpreter if a patient needs one, she added.

“You need to proactively plan,” she said. “You’re not going to do a great job serving people if what you’re doing is reacting three minutes (after) someone told you they had a language need and you’re scrambling to figure it out.”

After a two-week hospital stay, Ernesto was released this week to continue his recovery at home in Arvin.

The worst is over, said his wife, Hernandez Lopez. But she worries that others Mixteco speakers in her community will face the same anguish they did.

She said she had a message for the hospital: “Look for interpreters who speak Mixteco.”

Hospitalized For COVID-19 Without Information: What Californians Who Speak an Indigenous Language Often Face