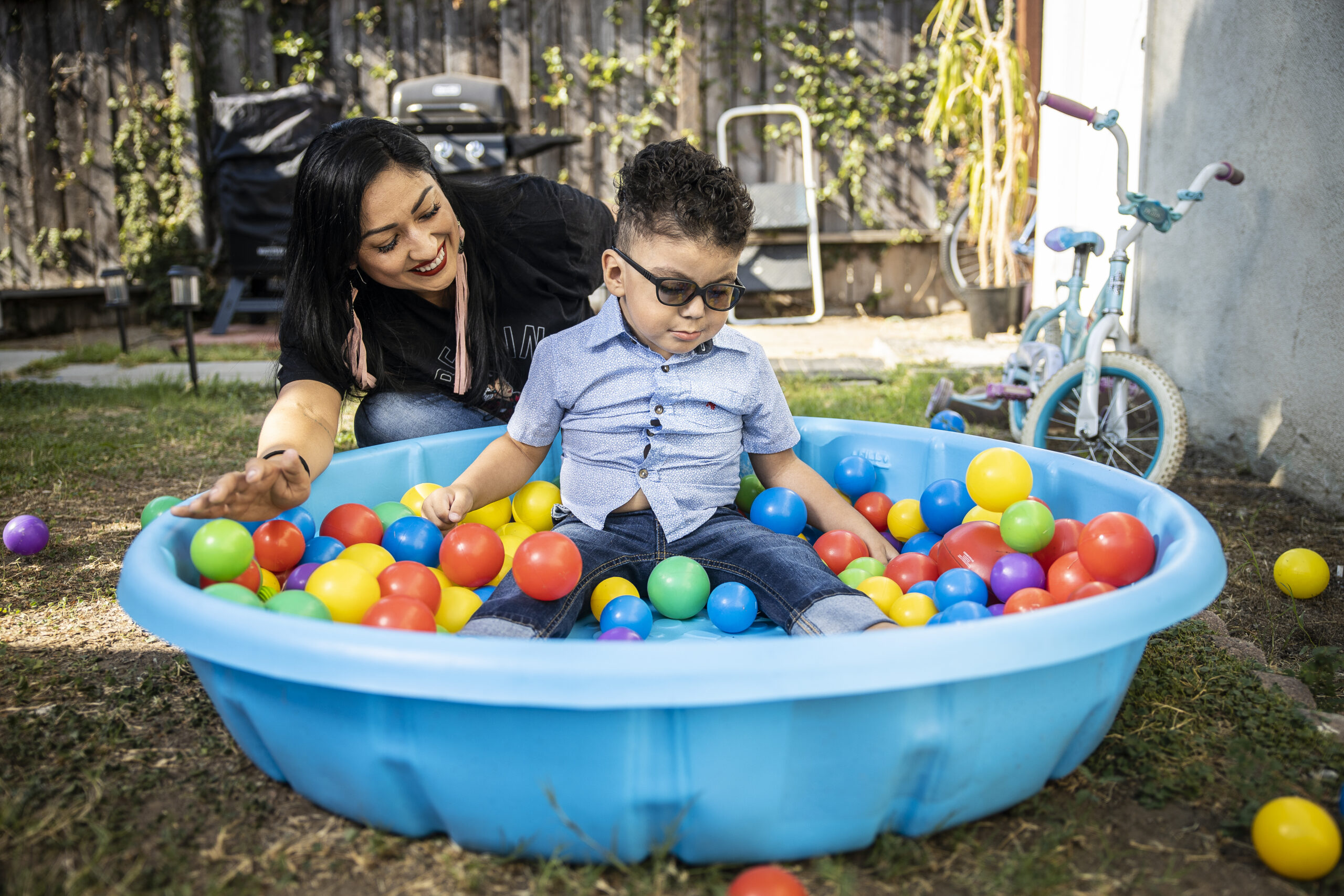 Melissa Alcala and her 3-year-old son Gavin at their home in eastern Los Angeles in late August. Photo by Martin do Nascimento / Resolve Magazine

Parents Caring for Children with Disabilities Have Some Advice

Melissa Alcala and her 3-year-old son Gavin at their home in eastern Los Angeles in late August. Photo by Martin do Nascimento / Resolve Magazine

Families share experiences of living through the pandemic and what help they still need.

Over the summer, Sherri Brady sent out messages to fellow parents of children with disabilities asking for help getting the word out about a virtual picnic she was organizing.

The answers she received back made it clear the families needed more than an online get-together.

Pandemic life had become overwhelming stressful, they told Brady, the Southern California representative for the Rett Syndrome Foundation. The parents were having a hard time keeping it together — supervising their kids’ online school and therapies, dealing with meltdowns, struggling with financial problems from lost employment, worrying about their medically fragile kids falling ill, and mourning the loss of social activities and the outlet they provided.

“By the time I got to the third (parent), we were all in tears,” said Brady, whose daughter, Lauren, 23, has Rett Syndrome, which affects brain development. “The floodgates just opened. My heart broke for them. I felt awful because there really wasn’t anything I could do.”

The pandemic has been especially hard on families caring for children with disabilities. Since March many have had to contend with the loss of in-person support from teachers, aides, therapists, family members and home health workers. Some have gone months with no services at all.

Now, after almost 10 months of staying home, some of these families have settled into the new reality and are receiving better support. Some have found creative ways to adapt, parents and advocates said. But others, like the parents Brady talked to in July, are still struggling to get their children the help they need.

“We’ve been busier than ever,” said Crystal Smith, program manager at the McClaney Family Resource Center in South Central Los Angeles, which provides guidance and support to families of children with disabilities. “Parents and caregivers are beyond stretched. There needs to be some sort of a reprieve.”

How well families are doing depends a lot on their resources, both relational and financial, Smith said. Some have been able to lean on other family or community members to help take care of their children or provide assistance with basic needs. If they have internet and a computer at home, they can take advantage of therapy and other specialist appointments provided via telehealth.

Other families are forced to focus on meeting basic needs. Smith and her colleagues are spending a lot of time trying to provide these families with food and learning kits. They’re hosting online workshops to help parents access services, offering support to caregivers who speak a language other than English.

For school-age children, online classes have provided a semblance of routine, and school districts have improved their ability to adapt curriculums to virtual learning, advocates agreed. But many kids still don’t receive the same amount of class time or learning help they got when classes were in person. Even for children attending schools that have resumed in-person classes, the experience has been mired by COVID-19 outbreaks, hybrid schedules, and the loss of socialization and physical interactions due to pandemic safety requirements, Brady said.

“We’re still not back to normal,” she said. “It’s like you need your kid to go back to school both for yourself and your job, but also for your child — so they can get back to their regular schedule and services. But you have to balance that with, ‘Are they going to be safe?’”

Melissa Alcala of Lincoln Heights in Los Angeles had a difficult time getting services for her 3-year-old son, Gavin, when widespread lockdowns took effect in March. Gavin, who has a rare genetic disorder that has caused partial blindness, epilepsy and developmental delays, was scheduled to begin preschool at Albion Street Elementary in the spring. But Alcala wasn’t able to enroll him in preschool until August, which meant that he lost out on months of schooling and supportive therapies.

Now, Gavin is attending Zoom classes every weekday morning for two hours, and receives physical, occupational, speech and vision therapy during that time as well. After regressing in his development over the spring and summer, Gavin’s attention span and ability to communicate have improved, Alcala said. He also has a one-on-one aide to help him during class, although the assistance isn’t very useful right now because it’s virtual rather than hands-on, she added.

“I feel a sense of relief because there was so much uncertainty. There’s still a bit of that now but I feel like we’ve finally moved forward,” Alcala said. “Now I have to hold my breath for the next step.”

That next step, she said, is safe, in-person classes.

For Yvette Baptiste, executive director of the Eastern LA Family Resource Center, a sign that the initial chaos of the pandemic has subsided is that she receives fewer phone calls. Earlier this year, her center got calls almost every day from parents whose children had lost services or were having a hard time getting a computer or navigating Zoom.

But there’s another reason Baptiste and her colleagues may be receiving fewer calls. Young children aren’t going to the doctor as frequently and fewer developmental delays and disabilities are being identified, Baptiste said.

She and other advocates are working with California’s nonprofits that coordinate services for children with disabilities, known as regional centers, and the Department of Social Services to get input from families and better respond to their needs. Some rule changes from the department have made it easier for regional centers to provide families of young children with therapies and other supports they can’t get through their schools, and also for vendors to assist parents with meeting basic needs such as obtaining groceries and learning supplies, she said.

For Brady and her daughter, Lauren, who live in Whittier, the pandemic has made life monotonous. Because Lauren is older, she no longer goes to school, but during non-pandemic times she participated in social and recreational activities, including horseback riding. Now, her life is mostly limited to walks through the neighborhood and going to the drive-thru for food, Brady said. Lauren’s health condition means she is at higher risk of serious illness from COVID-19, her mother said.

For younger children with disabilities such as Rett Syndrome, Brady thinks the prolonged loss of regular in-person therapies, classroom activities and social opportunities may result in developmental regressions. Once in-person classes resume as normal, schools must be prepared to provide extra support to children with special needs, she added, and not expect to simply pick up where they left off

“It’s going to take these kids a while to get back even to where they were, let alone starting to make progress and moving forward again,” she said. “They should not be penalized for something they have absolutely no control over.”

Parents Caring for Children with Disabilities Have Some Advice