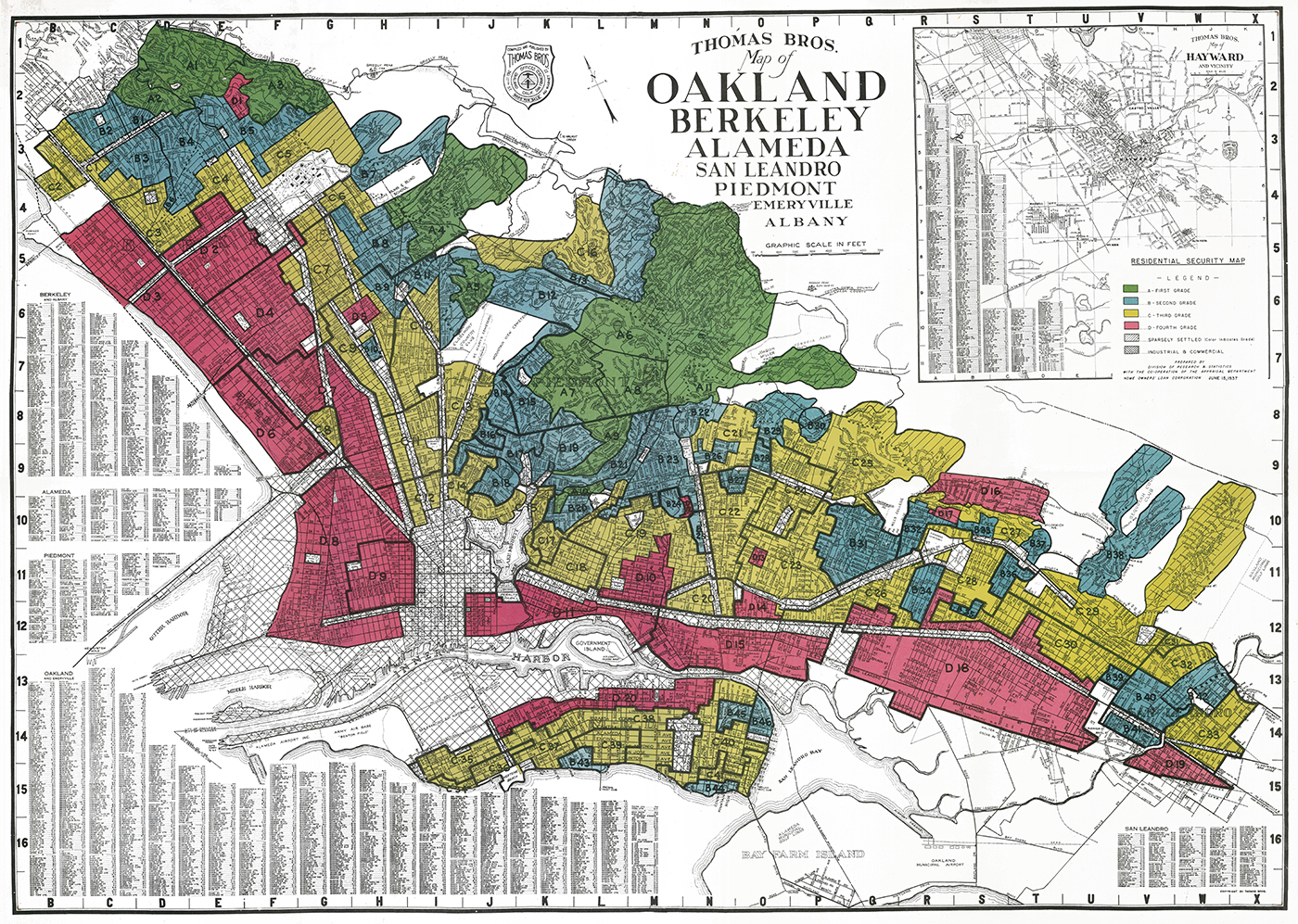 My Grandparents’ Redlining Story Shows Why We Must Do Better

When my grandparents chose to settle and purchase a home in Oakland, California, in 1974, they faced extremely constrained lending opportunities. Like many Black families during that time, they were essentially unable to purchase property outside of notorious redlined areas.

Maps, like the Home Owners’ Loan Corporation of Oakland map from 1937, were used by real estate agents to sell homes. They depicted the segregation of neighborhoods, which determined the areas where Black people were allowed to buy homes. The red areas on the map—hence the term “redlined” (primarily West Oakland, and portions of East Oakland) were graded “D,” which signified a “high lending risk” because of the large numbers of African Americans and other people of color residing in these locations.

My grandparents would eventually settle for a home in West Oakland. My grandfather, Dave Campbell, who was 41 years old and a veteran of the United States Air Force, had served his country for many years, only to have it turn its back on him when he sought to create wealth and prosperity for his family, as promised to White residents.

I share this part of my grandfather’s story to illustrate the real and lasting impacts of institutional racism: The same policies that cultivated wealth for White people in the United States prohibited the accumulation of wealth for Black people. And so today, as we face the impact of COVID-19 and the racial inequities it is revealing, our leaders have an opportunity to do better. Meaning, now is an opportune time to create equitable housing policies, and other policies that can close the yawning gaps created by racial inequity.

Many Californians are on the brink of homelessness given the record unemployment created by the pandemic. This issue affects low-income residents in expensive cities even more given that a larger share of their income is consumed by housing. Stakeholders should consider both short- and long-term solutions to address this crisis.

But if policymakers fail to do so, it could be another half-century or more before the U.S. is at such a close tipping point of social, economic, and political change.

Policy experts, advocates, and community members have been pushing our local, state, and federal governments to do the right thing with policy recommendations that could level the playing field for Black, Brown, and Indigenous peoples.

In our country’s history, large economic crises have precipitated major policy reforms seeking to move past the status quo and prevent future catastrophe. Historically, this relief has most often been afforded to White people, while actively excluding or failing to extend the same assistance to the nation’s Black population.

COVID-19 is disproportionately affecting the health and well-being of people in Black and Brown communities. Infection rates are higher and health outcomes are generally worse in African American and Latinx communities. These figures are unsurprising to public health experts who have been aware of persistent health disparities present in Black communities for years. However, they may be novel to a public that is increasingly concerned about the effects of systemic racism in the wake of a series of devastating police and vigilante killings of Black Americans.

Policymakers at all levels of government now are able to leverage popular mobilization to push for systemic change such as equitable housing policies. And they must be wary of repeating past policy mistakes and leaving structural inequities intact.

During past crises, the federal government has created sweeping policy reforms seeking to improve social and economic conditions. The New Deal is a prime example of the potential for government to engender positive change. Social Security, the right to collective bargaining, and Wall Street reforms are just a few of the policies that emerged as the country struggled to recover from the Great Depression. These programs are now seen as a given, but they were won after years of organizing and protests that ultimately swept President Franklin D. Roosevelt into power.

While these reforms were incredibly consequential, it’s also crucial to acknowledge the populations that were left out. For example, workers from the agricultural and domestic sectors were explicitly excluded from the initial iteration of the Social Security Act. This exclusion disproportionately affected Black workers, leaving an entire generation locked out of financial support and vulnerable to the capricious whims of typically White management. While Black people did benefit from the increased labor protections and wages from New Deal legislation, the potential of its impact was stifled by the racial animus of Southern Democrats, a key constituency in President Roosevelt’s New Deal Coalition.

Years later, policymakers would make similar mistakes by failing to properly address the material needs of Black households during the Great Recession. Research forecasts that by 2031,  Black household wealth will be nearly 40% lower than it would have been had the Great Recession never occurred. In contrast, White household wealth is projected to be 31% lower than it would have been absent the Recession. For the average Black family, this means that median wealth will be roughly $100,000 lower than it would have been without the recession. Further still, data from the Economic Policy Institute shows that median household incomes for African American households are down nearly 1.9% compared to pre-recession levels. Taken together, these figures show the failure of public institutions to address the hardship created by the racially biased predatory lending practices that contributed to the Great Recession.

The Oakland Community Land Trust, a nonprofit dedicated to expanding housing and economic opportunities, offers an example of an organization with more targeted efforts to generate racially equitable outcomes in the housing field. The Land Trust acquires properties and works to preserve affordability, prevent displacement, and support wealth-building in low-income communities with a direct focus on Black and Indigenous populations, and communities of color. Solutions like these have the potential to create lasting positive change for African American communities that have been disproportionately hit by COVID-19.

Our leaders must also work on short-term solutions given that housing is one of the most important social determinants of health. Local and state leaders should continue to explore relief options for low-income renters who are struggling during the pandemic. This includes the extension of eviction moratoriums to protect vulnerable low-income and working class families. Further, leaders at the federal level should work to extend the unemployment benefits initially provided by the CARES Act, which will heavily benefit low-income African American households.

These changes will not be enough to address the lasting legacy of redlining and systemic discrimination that has plagued Black communities for decades. We must do more. And future solutions must incorporate input from the communities who are most affected by COVID-19.

The ideals of the New Deal era were not flawed, the execution of those ideals were. For years, policymakers have failed to live up to these ideals by creating exclusionary laws; however, the country now has a chance to atone for its past mistakes. It is possible that our federal government can serve as an instrument of good to create well-being in the lives of all U.S. residents.

So let’s get to work building an inclusive society on the other side of this pandemic, to honor people like my grandfather, who never had the chance to live the American Dream he was promised.

Denzel Tongue writes a column for the California Health Report about the intersection of racial justice, public policy and health equity. He is a master of public policy candidate at The Goldman School of Public Policy and a California Initiative for Health Equity Fellow.

This commentary was produced in partnership with YES! Magazine.

My Grandparents’ Redlining Story Shows Why We Must Do Better