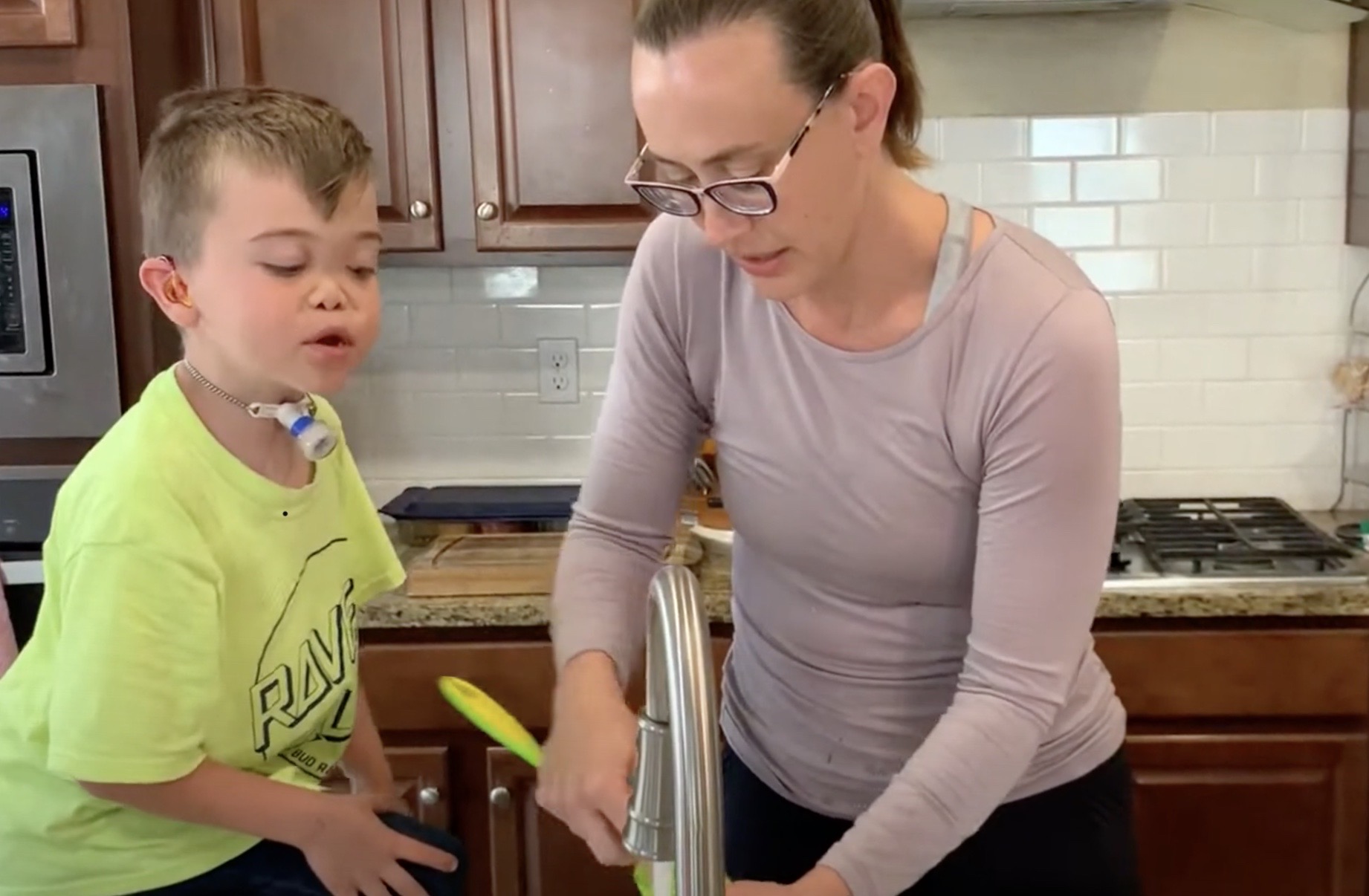 Suppliers and parents began reporting shortages — most notably of ventilator circuits — early in the pandemic. Now, they say the problem is ongoing and kids are paying the price.

Jenny McLelland stands at her kitchen sink next to a pile of plastic tubing, a bottle of disinfectant, and Clorox bleach spray. Perched beside her on a stool, her 9-year-old son James holds up a handwritten sign announcing the subject of the video.

“How to wash and kinda, sorta sterilize ventilator circuits,” says McLelland in the video posted on YouTube.

“Oh my God, don’t put your feet in the sink!” she gasps, as James clambers onto the countertop and dips his foot into one of the basins. James quickly removes it, snickering and glancing shyly at the camera.

The endearing video is similar to other family-made “how tos” posted on the internet for everything from cooking to car repairs. But underlying this one is a life-or-death concern. McLelland, a parent advocate for children with medically complex conditions, created the video after hearing from families struggling to obtain ventilator circuits — a disposable section of tubing used in home ventilator machines — during the pandemic. Caregivers needed to know how to clean them, because breathing through a dirty ventilator circuit is dangerous to an already fragile child’s health.

Although she made the video and another one about sterilizing tracheotomy tubes in an instant pot in March, the recordings remain relevant, McLelland said. She and other parents of medically fragile children report they are still not receiving their regular supplies of equipment, forcing them to wash and reuse items that would normally be thrown away to comply with safety recommendations.

“I’m worried that this will become the new normal,” said McLelland, who lives in Clovis, and whose son James uses a ventilator because of a rare genetic condition. “The problem is that no one is tracking this, and this is a population of disabled people and disabled children who die very frequently … These are not children who tolerate changes in care well.”

Based on national estimates, it’s likely that California is home to about 35,000 children with medical complexities, although no one tracks state-specific data. These are children with chronic conditions that require significant medical attention and specialized equipment, such as ventilators. These children may have cystic fibrosis, cerebral palsy, chronic heart conditions or other congenital disorders. Typically, they receive monthly supplies from a distributor, often paid for through the state’s health insurance program Medi-Cal or a related program for children with disabilities called California Children’s Services.

SuperCareHealth, one of the state’s largest respiratory equipment suppliers, confirmed it is still rationing some ventilator supplies because it can’t get enough from factories and wholesale distributors. The situation has improved since early in the pandemic, when hospitals and governments were rushing to buy up respiratory and personal protective equipment, but some items are still on backorder, said John Cassar, the company’s chief executive officer. Existing patients are getting supplies, but may have to use them longer, he said. The company has also had to turn away some new clients because of shortages in equipment used for oxygen therapy, he said.

Complicating the matter is that costs have increased due to the demand, but Medi-Cal reimbursement rates have not kept up, he said. That’s making it difficult for suppliers like him to stay afloat, Cassar said.

“The margins are already ridiculously low for Medi-Cal,” Cassar said. “We’re already underwater because of the overhead it takes to manage this population, and the reimbursement continues to drop.”

The Health Industry Distributors Association, a nationwide trade association representing medical products distributors, confirmed that pandemic-driven demand has caused supply shortages, but did not specify what types other than personal protective gear such as gloves and masks.

“Demand increases have been unprecedented and shortages have occurred in a number of product categories,” the association’s senior vice president, Elizabeth Hilla, said in a statement.

The agency “takes all concerns seriously and advises (Children’s Services) beneficiaries to first consult with the treating physician, who is in the best position to ascertain the acute ventilator/oxygen needs of their individual clients,” Spokesman Anthony Cava said in an email. “Beneficiaries and families should also consult with the treating physician or case manager if they have concerns about specific ventilator or oxygen supplies.”

Cava said the agency is “committed to ensuring that providers and counties make every effort to ensure that all clients receive medically necessary ventilator components, as prescribed and indicated.” California families with additional questions or concerns should contact the appropriate Children’s Services county office or Health Care Services at CCSProgram@dhcs.ca.gov, he said.

McLelland received the same advice when she contacted the agency in April to request help addressing medical supply shortages, both for herself and on behalf of other families, but her email complaint has so far not resolved the issue. She also advised James’ pulmonology teams that medical supplies were becoming scarce, but they were unable to provide direct solutions because doctors don’t supply the equipment themselves and don’t have power to solve a global shortage of supplies.

“This is a supply chain crisis, not a problem that can be solved by individual patients calling individual doctors,” she said. “A doctor could certainly call and plead to the DME (durable medical equipment provider) that a particular patient should really get an extra circuit or two this month to prevent an inpatient admission. But the DME would be scrambling to get those circuits from a supply chain that is broken at the systems level. Ventilator circuits are a zero sum game right now — any circuit that one patient gets is a circuit that another patient doesn’t get.”

No one is tracking outcomes

Exactly how many families are facing supply shortages is unclear. But McLelland, who is part of several, private social media groups for parents of medically fragile children, said she sees people complaining frequently about shortages of ventilator circuits, tracheotomy tubes, and catheters, both in California and in other parts of the U.S.

She herself was recently notified by her son’s supplier, Valley Children’s Healthcare, that ventilator circuits are on national backorder because of the “COVID-19 respiratory supply shortage.” The hospital sent her an alternative type of circuit, and spare parts to modify it to fit James’ machine. The process is so complicated that even his home respiratory therapist was shocked, she said.

“I am an advanced ventilator user, I’m good at this,” McLelland said. “The process for cannibalizing these wrong circuits and merging them and taping them together is way beyond what home users should be expected to do.”

Sabrina Renteria of Bakersfield said she’s trying to adapt to not getting the usual number of ventilator circuits for her 2-year-old son, Gabriel, who has a rare bone disorder that affects his chest cavity. He used to get four circuits a month before the pandemic. Now he just gets one, forcing Renteria to wash and reuse them, despite her concerns that the fragile plastic parts might crack and make Gabriel sick.

For the past two months, she’s also not received his regular supply of filters for a mobile ventilator that he uses to go to the bathroom, outside, or to the doctor’s office. She used to get 30 a month, because she’s supposed to change the filters daily. But, like the circuits, she’s now washing and reusing the same filter over multiple days.

She recently learned that Gabriel’s regular shipment of tracheotomy tubes and feeding syringes was also on back order.

“I thought it would be better once things started to settle down with COVID, but if anything it’s gotten worse,” she said. “It’s been really hard. We’ve been trying to reuse (supplies), or go online and buy them ourselves but that’s really difficulty to do because they’re hard to find and are really expensive.”

Renteria said she told Gabriel’s pediatrician about the problem, but the doctor was unable to help.

Meanwhile, Diana Herrera of Sylmar said she’s become used to coping with just two ventilator circuits a month instead of the usual eight for her daughter, Ariana, who has a neuromuscular disorder resulting in chronic lung inflammation. She cleans the circuits daily, and reuses them, she said. Luckily, Ariana doesn’t require a ventilator all the time, which helps preserve the circuits, she said.

“I’m very blessed that my daughter can get off of (the ventilator),” Herrera said.

Cassar estimated the shortages would continue for another six months. McLelland, however, said she worries the reduction in equipment is becoming “calcified” and that it’s endangering the lives of children.

“We’re not going to hear about a direct death that is directly attributable to this,” she said. “But a population of kids who gets pneumonia and dies frequently will get pneumonia more often and die more frequently. But no one is tracking that.”