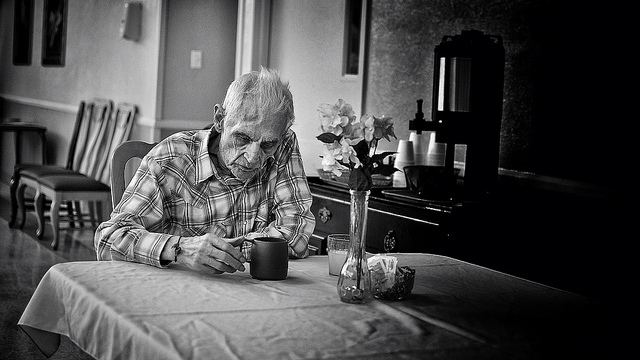 Dr. Michael Wasserman, a geriatrician for 30 years, tells this story about a call he once received from a nursing home: a resident had just lashed out and struck a staff member, so the nurse wanted to know if she could prescribe the anti-psychotic drug Haldol.

“You know what I told the nurse?” Wasserman told an audience of nursing home managers last week in Oakland. “Why don’t you just get some duct tape and a rope and tie them down. Because that’s what chemical restraints are – restraints.”

As part of the Affordable Care Act, in 2011 the federal government set new guidelines to reduce the use of psychotropic drugs in nursing homes. Once averaging 24% nationally, the number of residents receiving these drugs has now dropped to 19%. In California this number fell from 22% to 15% during the same period.

“Here in California we’ve set a goal of reducing that number to under 10%, which would put us in first or second place (behind Hawaii),” says Wasserman. “We believe that 10% number is realistic.”

Wasserman heads the California nursing home efforts for HSAG, which contracts with Medicare as part of a national innovation effort to improve quality and performance.

“Xanax is the crack of benzos,” pronounced Landsverk. “Don’t use it.”

The meeting focused on a single topic – dementia – with the following mantra: learn about the human being behind the diagnosis.

Noting that those 85 and over are the fastest-rising American demographic, Wasserman related the story of a female resident with acute claustrophobia.

Although two of the nursing home staffers knew she suffered from the disorder, neither had asked her why. In fact, the elder resident had lived in Austria during World War II when Russians invaded the country; she had to hide underground in a cramped space as her parents covered her mouth to prevent her from screaming.

Wasserman also discussed the list of “best practices” for nursing home reform distributed by the federal Centers for Medicare & Medicaid Services (CMS), which oversees reform and innovation nationally: create a calm environment with meaningful relationships and engaging activities that improves both physical and mental health while minimizing the use of anti-psychotic drugs.

While the culture change movement is slowly taking hold, change remains difficult within the state’s 1,200 nursing homes where the vast majority of residents over 85 suffer from some type of dementia.

Nursing home workers are frequently so over-tasked they often can’t take the time to find out more about residents or drastically change the way they’re cared for.

Wasserman insisted it’s worth the effort.

“We’re putting out fires all day long, we live in a chaotic environment, (so) how do we have the time?” he asked. “How do you not have time for the things that will eventually save you time and money?”

Yet clearly there’s a long way to go.

Wasserman asked those in attendance about the cutting-edge program Music and Memory which helps rekindle memories of the past and improves cognition. Few had heard of the documentary Alive Inside which illuminates the powerful improvements seen when introducing individualized iPod music programs into nursing homes.

“If this was going to be easy, you guys, you shouldn’t have gone into this business.”