Saying No to Teen Dating Violence One Classroom at a Time 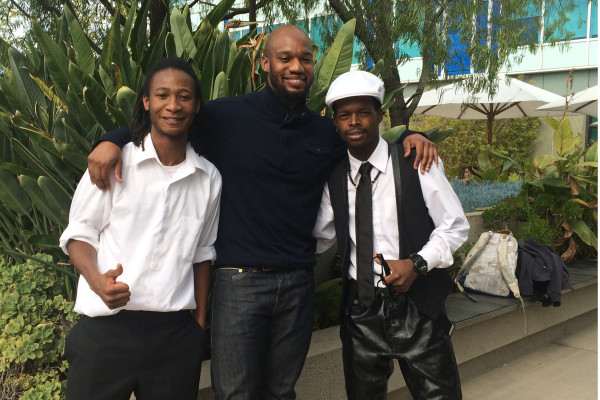 Jessica Corral, an education coordinator with Peace Over Violence, a Los Angeles-based advocacy group, stands in front of a rowdy class of teenagers at San Gabriel High School and draws a “Cycle of Violence” on a white board, a circle that represents a sort of relationship weather map. It goes from sunny honeymoon phase, to tension-filled and cloudy, then thunder and lightening, and finally an explosive storm, indicating abuse.

Corral uses a mobile phone to play an Eminem song “Love the Way You Lie” featuring Rihanna, and asks the students to listen for those relationship patterns in the lyrics. “When you hear honeymoon stage, throw up one finger, if you hear tension, put up a two, if you hear something that sounds like abuse, you put up a three…and if it sounds chaotic put up your whole hand,” she says.

This is just one of many lessons in Peace Over Violence’s violence prevention curriculum, In Touch With Teens, currently being deployed in junior high and high schools in the L.A. Unified School District. The philosophy—if people can learn violence, they can unlearn it and if they talk about it, they can change it.

“Through song analysis, students are able to identify how violence escalates,” Corral explained, “and with music, there’s definitely moments where there are lot of light bulbs going off.”

Freshman Doanh Thai, 14, agreed. “The song tells you how the cycle just goes over and over and it’s hard to break out of it after you’re in it for that long,” she said. “In the movies, the cliché thing is they will get back to normal, but that usually doesn’t happen.”

In the U.S., about one in three teenagers aged 14 to 20 have experienced dating abuse and about the same number say they have committed dating abuse themselves, according to a 2013 report by American Psychological Association. More than one in 10 adolescents report they were hit, slammed into something or injured with an object or weapon on purpose by someone they were dating.

“It’s not about trying to intervene on individual case, it’s so every student is getting messages about what it means to be in a healthy relationship,” said Sarah Foley, a Prevention Project Specialist with the California Partnership to End Domestic Violence. They are working with Peace Over Violence as part of DELTA FOCUS, a five-year C.D.C.-funded domestic violence prevention initiative. “If all staff at schools are taught about how to intervene in early warning signs, and build classrooms that are safe for all students, think what kind of positive impact can that have on their life.”

The 11-unit curriculum, designed for 12 to 19-year-olds, promotes specific principles to prevent teen dating violence using strategies that draw from sexual assault and alcohol and drug prevention playbooks. The units focus on everything from healthy sexuality, to power and control, to media literacy and bystander accountability.

Students talk about the roots of violence—both global and local. They tick through examples of the systematic mistreatment of people and groups by class, race, sex, and disability.

In a unit on healthy relationships designed for a history class, students learn to recognize the status of minorities and women in different time periods in American history and encourage sharing of individual cultures and heritages to foster a multi-cultural worldview. Class time is also spent analyzing the differences between personal power and dominance of others.

One activity prompts students to identify a specific type of bullying—sexual abuse, isolation, intimidation, social status, name calling, or cyber bullying—and mark their answer on the “Bullying Power and Control Wheel.” There’s also a “Dating Game” which includes this question: “if we went out on a first date, do you think it should end with a) a hug, b) a hug and a kiss, or c) in my room after the hug and kiss? Discuss.” By the end of the class, students set goals for healthy relationships, and talk about the choices they make, what kind of adult they want to be, and what avenues they can take to get there.

When Clifton Trotter, the Youth Violence Prevention Specialist with Peace Over Violence, walks into the classroom to teach the In Touch with Teens curriculum, he carries his personal experiences as a point of reference.

“I’m from South L.A. and I come from a household riddled with domestic violence and so I have seen it firsthand,” said Trotter, “but we take a trauma-informed approach, which means if you are environmentally or psychologically exposed to it, the trauma might be just as intense.”

Trotter has also employed the In Touch With Teens curriculum outside of the schools with young, primarily African-American men in the Engaging Men project of South Los Angeles. The mission of the 5-year-old project, Peace Over Violence is to identify young men who can become leaders in fighting gender-based violence and eventually, ambassadors who can spread the peace-building techniques in their communities and their homes.

Participants create original performances and music with an anti-violence bent. One compelling lesson, Trotter says, is a video documentary that analyzes Hip Hop culture using the lens of social psychology. The video spotlights how commonplace and tacitly tolerated misogyny is.

“There’s a clip where women were hit on their butts, and that’s assault and it’s just normalized,” said Liliana Herrera, who helped develop the In Touch With Teens curriculum. “This is a ‘callout’ to the bystander. We ask students why isn’t anyone stepping up?” That video analysis segues into looking at the mindset behind the songs and that often turns into an exploration of racism and feelings of oppression. “When you begin to talk to youth about critical things and when they begin to engage, you see a transformation. They want to become part of violence prevention approach, a movement.”

Gabriel Hercules, 22, a graduate of the Engaging Men program and a student at West Los Angeles Community College, is such an ambassador.

“I personally took a great feel for it because my family has a history of domestic violence and it changed me a little,” he says. His father abused his mother before he was born and some of the partners he’s been with have experienced it in their past. “With Engaging Men, I’ve learned how to address the problem so when I see an unhealthy relationship, I can step back and really analyze it …and be someone people can talk to without feeling judged.”

Los Angeles School Board Member Steve Zimmer said he’d like to see the curriculum in every school in the district. Research shows that schools can make a difference in preventing adolescent dating abuse when they bolster kids emotional skills and equip educators with ways to foster good behavior, according to a report funded by the National Institutes of Justice.

“This is work that can’t be about some schools, it has to be about all schools,” he said, “You cannot achieve academically if you are not safe.”

Ninth grader Valerie Montelon, 14, who has been moving through the curriculum with Corral at San Gabriel High School think that’s true.

“A lot of people suffer from violence, a lot of my friends do,” she says. “They use bad words and they act that way because they learn it at home. Everyone can break the cycle.”

Saying No to Teen Dating Violence One Classroom at a Time