State Restores Some Funding for Kids with Special Needs 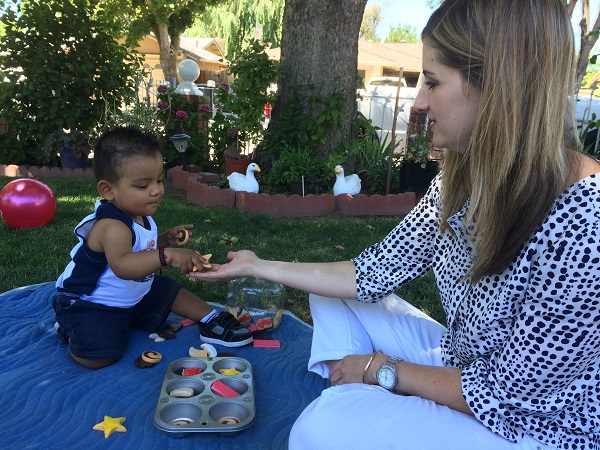 Born five weeks premature, 2-year-old Corbin can’t speak as well as other children his age. But the Modesto toddler is improving all the time because of an infant development specialist provided by California’s Early Start program.

Now more infants and toddlers with developmental delays and those at risk of delays will receive those services because of the state Legislature’s recent move to restore funding of the program to 2009 levels.

The state decided to return funding to the level it was before budget cuts forced by the economic downturn. The Early Start budget will increase from $270 million in 2013-14 to $293 million in 2014-15, according to the state Department of Developmental Services, which oversees the program.

Tina Jones, Corbin’s mother, said her son is now able to make letter sounds rather than just noise because of his weekly sessions with the infant development specialist. “He loves her,” she said. “He’s hugged her a couple of times.”

Patricia Herrera, project director of 211 LA County, a social services referral agency, said she is thrilled that more California children will be able to benefit from those services.

“We did see some kids falling through the cracks and not getting intervention. It was very sad to see that happening.”

Early Start, which was founded in response to federal disability rights legislation in the 1980s, serves about 30,000 infants and toddlers under age 3. Services are available for children who have a delay in at least one of the following areas: cognitive, physical (including hearing and vision), communication, social or emotional and adaptive. There is no cost to families for evaluation; treatments are paid for by public or private insurance. Services are coordinated through 21 nonprofit regional centers throughout the state.

Research shows that participation in early intervention can have significant effects on children’s development and prevent them from needing special education services later on.

“In many cases if you catch these developmental delays and conditions early enough, you can turn the tide and they don’t become long-term lifetime clients,” said Rich Rollens, legislative adviser to the Association of Regional Center Agencies. “A little bit of money upfront can save millions down the road.”

Jones, Corbin’s mother, said her road to the program began when her son passed only three of 10 questions at his 1-year checkup at the pediatrician. The doctor referred her to Stanford University for an evaluation, which led her to Early Start. Her son has been working with the program for six months now.

Jen Schrotenboer, the infant development specialist, comes to Jones home once a week to work with Corbin. Federal law states that services for young children must be provided in a natural environment- where the child would normally be if not receiving treatment. For example, the children cannot be sent to a speech therapy office.

In one recent session, Jen got Corbin to put toys in a bowl and take them out again. “Up and out” she said repeatedly as Corbin giggled. Schrotenboer works closely with Jones to give her ideas of helpful games she can play with their children throughout the week. “We brainstorm strategies together that might benefit him,” she said.

Claudia Lopez, another Modesto mother, said she appreciates the infant development specialist who works weekly with her 17-month-old son Maurizio. Her boy was an extreme preemie born three months early with a weight of only 1 pound, 11 ounces. He can’t walk yet and is just starting to take a few steps.

Sitting out on the family’s front yard on a pleasant sunny day, specialist Nicole Montgomery coaxed Maurizio into standing up to get some toy monkeys. She also got the smiling boy to make a game of putting small toys into a muffin tray, beefing up his motor skills.

“To him, it’s playtime for an hour,” Lopez said. “But she is teaching me in that hour things to work on throughout the week.”

Montgomery said she has had great results working with her clients. She recalls walking into one house where the 1-year-old baby was attached to feeding and oxygen tubes and was immobile on a mattress on the floor. The family wasn’t sure what to do with him. She worked with the family for close to a year showing them simple exercises to do with him. He is now ready to crawl, which was huge since when she arrived he couldn’t even lift his head.

Herrera, who works with 211 LA County, said she’s glad that more children will now benefit from that attention thanks to the restoration of state funding to Early Start. “The brain is so amenable between birth and 3 -especially between birth and 2,” she said. “These kids can make great advances with early intervention.”

State Restores Some Funding for Kids with Special Needs