A farmer’s market on wheels 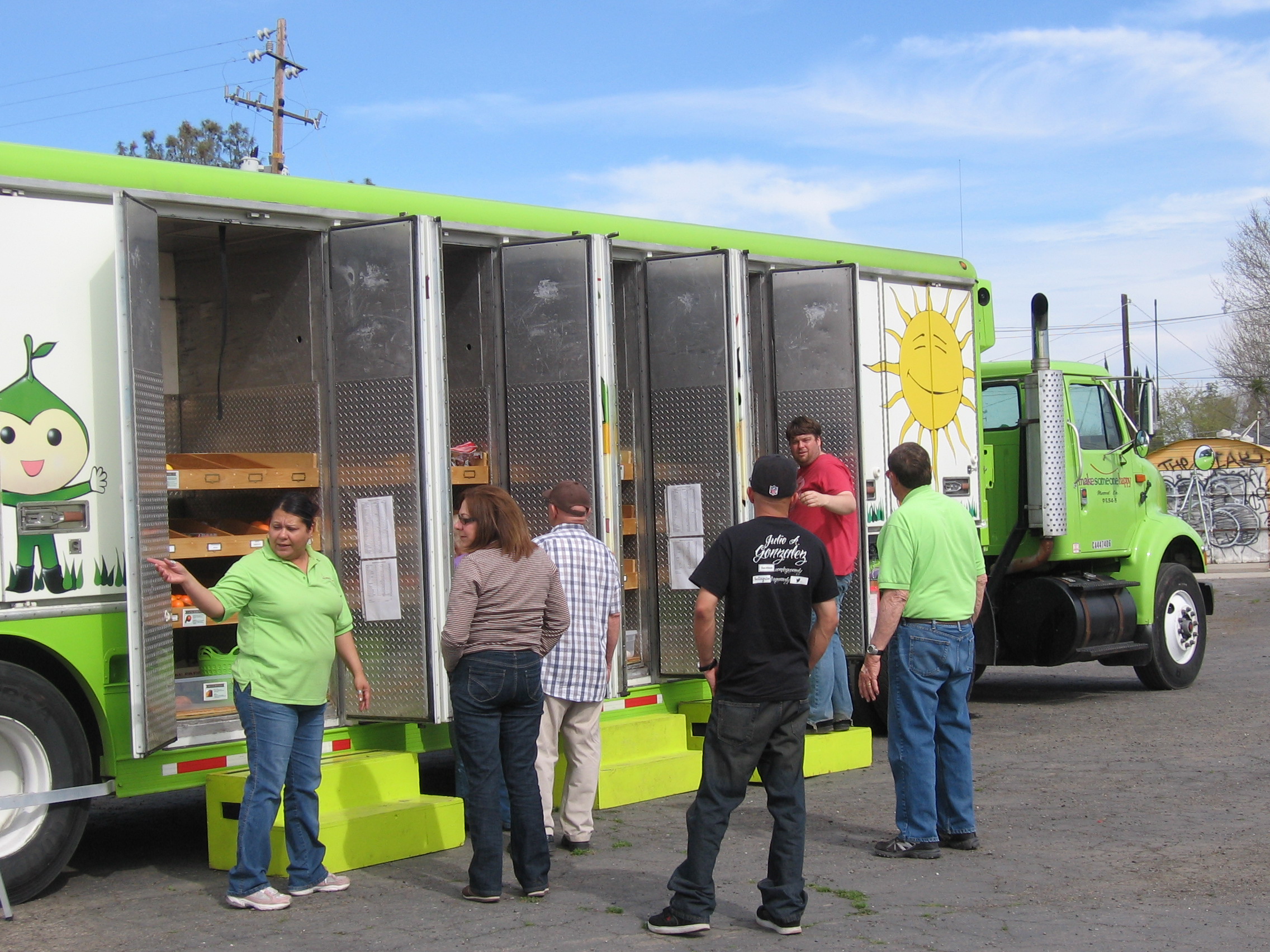 Even in California’s fertile Central Valley – where 25 percent of the nation’s produce is grown – many people go without fresh fruit or vegetables — because they can’t afford them or don’t have a story nearby that sells them.

“Our median income is so low, people cannot afford good produce,” said Don Bergman, who runs Make Someone Happy, a nonprofit working with the Merced County Human Services Agency and other groups to carry fresh produce to those without easy access. “People are without cars, or are elderly and not as mobile, so they cannot walk to the nearest grocery store.”

Bergman runs Produce on the Go, a food truck. It’s not the kind people have seen in big cities or on TV. His truck is a donated, refrigerated beer trailer on a big rig, and it is open seven days a week at various stops around the county: in low-income neighborhoods, near a health clinic that caters to low-income residents, near low-income schools and in places where older people need to shop.

There are no prepared foods for sale, just fresh fruits and vegetables, sometimes nuts and eggs.

On a recent sunny Sunday afternoon, Bergman set up shop in a vacant lot at Ashby Road and Beachwood Avenue in Merced, right next to Highway 99. Before the doors were even open, people lined up.

“Some days, it’s really busy,” said Ida Garza, who works as a cashier at the food truck and helps customers by interpreting from English to Spanish, answering questions about the produce and giving out recipe cards and booklets that will help them use what they buy in healthy meals. “Some places we stop, we are swamped. Like Golden Valley Health Center on Thursdays. We have a steady flow of new clients in the patients at the clinic, and our regulars are the doctors and nurses who come out to buy snacks.”

On this Sunday in Merced, shoppers could get fresh grapes, kiwi, mangos, Asian pears, kale, nuts, a variety of peppers and much more, including eggs for $1.50 a dozen.

“I chose things I cannot find at my local stores,” said Lydia Hargraves, from Livingston. “Sometimes it’s hard to find fresh fruit in the small stores, and when you do, it’s either old or very expensive.”

Most neighborhoods have convenience stores, but they aren’t known for their high-quality produce, she said.

“These grapes in my closest store would be 150 percent more expensive,” Hargraves said.

The produce isn’t always cheaper than in stores – prices change according to availability. But Bergman said he tries to keep prices comparable or lower so people get a good value and will want to keep coming back.

The goal is only to be self-supporting so the produce sales pay to restock the truck and cover salaries. Beyond that, it’s just about helping people get better quality food than they would otherwise have, especially children.

Joan Penrod of Merced made her first visit to the food truck on that Sunday afternoon. They just happened to be driving past and wanted to see what was going on.
“Money’s tight,” she said, for her and her husband, who are retired. “We don’t get food like this very often.”

The mobile farmers’ market just opened last November, but Bergman said the number of customers has been steadily increasing. The first weeks, it saw about 200 people a week, but by Christmas, the average was 300 people a week, according to the Human Services Agency. The truck always makes the same stops for two or three hours at a time, so neighbors are learning to expect it.

More than 95 percent of customers have a positive reaction, Bergman said, though a few people don’t like it because it’s associated with the county and they think the food should be free.

“They think it should be like the food banks, or the USDA bags they get,” he said. “But you don’t get fresh produce from the food bank or in the bags. That’s what we’re bringing.”

Ana Pagan, director of the Human Services Agency, said she’s had a few complaints from people who think this is a waste of money. But she says the food tryck is is part of her agency’s plan for a holistic approach to dealing with the county’s needs.

The cash-strapped agency does what it can to support the truck, like posting fliers and spreading the word any way it can. Some customers said they heard about the truck in nutrition classes or from relatives, and Bergman and his wife, Nancy Young-Bergman are working on a website where people can get updates on the truck and its stops and offerings.

They sell what’s fresh, and get the majority of their produce from growers within a 150-mile radius, including the Southeast Asian farmers who often set up their own roadside stands. The produce isn’t organic, because Produce on the Go wouldn’t be able to sell at the prices it does. However, Bergman said most of the growers he deals with try to use as little fertilizer and as few sprays as possible.

“It’s all farm-fresh and certified,” he said.

Using grant money obtained by the Human Services Agency, Bergman hired a driver, a retired man with big-rig experience, and pays for gas and insurance. The company that donated the big truck also gave Bergman a van he uses to pick up the produce. A friend with a vacant lot allows the truck to overnight there, and the Human Services Agency paid to install an electrical outlet there so the refrigeration system can stay charged.

Some of their favorite stops are near schools, where the teachers bring the children out to get snacks and learn about the produce. The kids tell their parents, and that’s how some of the area’s families are learning about the truck.

The Bergmans have big plans for the truck this year – they want to start parking near evening exercise classes and even offer some exercise themselves for patrons.

They are also working on devising ways to measure their success.

“We very much want to impact obesity and diabetes rates,” Young-Bergman said. “It’s never been done like this before. But it’s got to make a difference.”

A farmer’s market on wheels