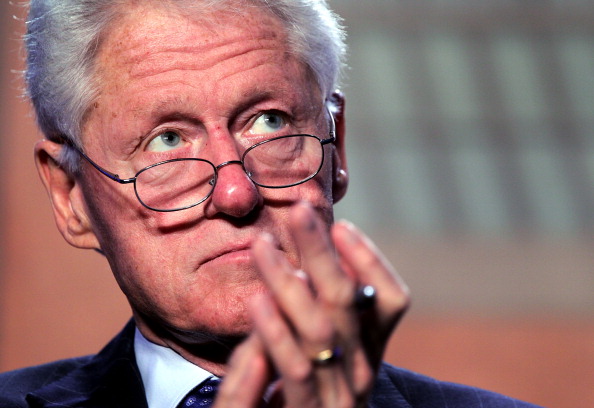 Former President Bill Clinton and his daughter Chelsea recently headlined the second annual Clinton Health Matters Conference in La Quinta, Calif. They announced $100 million in corporate pledges to improve health across the U.S., and $11 million of that money will go to the Coachella Valley. At the conference, speakers addressed a wide range of issues. “We are trying to change the whole ecosystem of health in this country,” President Clinton said. “If you measure the U.S on health outcomes, we rank between 25th and 33rd in the world. We can do better. We have to change.”

Clinton told the audience of 500 that getting people to exercise and eat better has a huge payoff. “Chronic disease claims 7 out of 10 lives. Seventy percent of health spending goes to treat diabetes, heart disease and obesity,” Clinton said.

Many of the experts at the conference explored the role technology has to play in improving health.

“We need a systems approach to health care. Our knowledge, delivery and payment systems are too disorganized. We need to make it seamless, overarching,” said Patrick Soon-Shiong, M.D., a philanthropist and CEO of a medical software company.

The federal government, Soon-Shiong argues, needs to coordinate and fund a massive grid computer system to link all health records. He also announced that his company will partner with the Clinton Foundation to form a National Cancer Collaborative that will use the genome approach to predict which cancer drugs will work best for a particular patient.

Several speakers praised the Affordable Care Act and Medicare Advantage for starting to chip away at the entrenched fee-for-service model. “The issue is to create outcomes-based care that incentivizes health, not procedures. We need doctors to be incentivized with salary and bonuses if they keep people healthy,” said Soon-Shiong. Bruce Broussard, CEO of Humana, added “Medicare Advantage works because it was conceived as a way for paying people to take care of people on Medicare, and you get a premium for keeping them healthy.”

Another major announcement concerned the collaboration between Facebook, MTV, and the nonprofit Jed Foundation to address the abuse of prescription drugs and suicide among college students. Facebook announced a new guide on their site that helps people report content that suggests a friend is suicidal. Facebook will then review it and forward information on local resources to the person in need. MTV is making and promoting videos on prescription drug abuse. One expert noted that the United States has 5 percent of the global population yet we consume 75 percent of the world’s prescription medication.

Former Congressman Patrick Kennedy talked about his struggle with drug abuse and mental illness and said general practitioners should regularly ask patients about their emotional health and drinking habits. He said everyone needs “a checkup from the neck up.”

Other experts discussed the digital revolution in health care, noting that so-called “wearables,” like bracelets that measure sleep and footsteps, are getting more popular. Companies are working to make this sort of technology so easy-to-use that it practically disappears, yet still motivates people to take more steps or get more sleep. Moderator Chelsea Clinton predicted, “In the future, ‘big data’ becomes personalized smart data that won’t be scary for anyone of any age to use.”

At the 2013 Health Matters Conference, the Clinton Foundation announced the Clinton Health Matters Initiative (CHMI), which gathered dozens of health experts and nonprofits in the Coachella Valley (C.V.) to brainstorm a “Blueprint for Action.” The CHMI’s Regional Director, Tricia Gehrlein, is coordinating the implementation. “In our blueprint for action there are 44 bold steps to be accomplished over five years. We have a long history of collaboration,” she said. “Building upon that collaboration is our true success.”

Gehrlein is helping make the connections that enable diverse non-profits to make measurable progress in a wide range of issues that directly affect health or quality of life. The blueprint spells out specific action in the following areas: encouraging healthy behaviors regarding diet, exercise, tobacco use, alcohol use and sexual activity; improving access to and quality of health care; boosting social and economic factors like education, employment, income, social support and community safety; and improving environmental quality and building more trails and parks. In just the first year alone, significant progress has been made on more than half of those steps.

Substance Abuse
Eisenhower Medical Center is funding a position at the Betty Ford Center to do anti-drug education at local schools. In addition, Cal State San Bernardino Palm Desert has formed a substance abuse advisory committee. It works closely with the Public Safety Committee run by the Coachella Valley Association of Governments.

Alliance for a Healthier Generation, which is a sister organization to the Clinton Foundation, is working with all three local school districts to encourage them to serve healthier foods. In addition, the CHMI and the nonprofit Hidden Harvest are collaborating to ask local farmers to donate one row (one acre) per crop to feed low-income families and the homeless.

Physical Activity
The Desert Healthcare foundation and the Mayor of Palm Springs have established a fund of $200,000 for physical activity infrastructure. They are also looking to establish an online health portal that will be a trusted resource on health matters in the Coachella Valley. The mayor’s Healthy Planet Healthy You race raises about $1 million a year to fund priories laid out in the blueprint. Finally, the CHMI is also working with the Coachella Valley Association of Governments (CVAG) to put local hiking trail maps online.

Sexual Activity
Desert Regional Medical Center has contributed $1.5 million through the blueprint to the “Get Tested Coachella Valley” program, which is run by the Desert AIDS Foundation. This program launched in November 2013 and has equipped a mobile health van to offer free 20-minute HIV tests at community events. “Desert Regional Medical Center will be putting $1.5 million over the course of three years toward the towards the Get Tested Coachella Valley initiative, including their testing van, to ensure that every citizen in the C.V. over the age of 12 is tested and that they know their status,” said Gehrlein.

Health Care Access and Quality
The CHMI is working with C.V. doctors and hospitals to join the nonprofit Inland Empire Health Information Exchange, which is working to provide secure, efficient online access to health records for patients and providers. Tenet Healthcare, which owns two C.V. hospitals, is working on an internal system that can be integrated with the regional exchange in the future.

Family and Social Support
The CHMI is working with the Office on Aging and the Regional Access Project to secure more funding for the RSVP program, which connects seniors with volunteer opportunities. This is meant to help seniors be more active in the community, which will improve health by reducing loneliness and widening people’s social support networks. CHMI is also working with other senior groups to offer more health education.

Community Safety
The CHMI and the district attorney’s office plan to replicate an alternative youth court that recently restarted at Palm Desert High school. The program “tries” students for minor offenses with a real judge, attorneys, and a jury of their peers. The idea is to get kids to take responsibility for their actions before they slide into more serious criminal behavior. This would then keep them on track to get an education and later secure a good job. Research shows that good health is directly connected to a person’s income and educational level.

Environmental Quality
CHMI has done an analysis of the general plans for the C.V.’s nine cities to identify how they can integrate health. The cities of Palm Springs and Coachella have already made major strides on promoting wellness. Coachella is planning for a large population increase over the next 20 years, so they are requiring developers to design new neighborhoods with health in mind. Coachella Mayor Eduardo Garcia says, “You’ll see a significant amount of open space, connectivity, a lot of promotion of bike lanes and when you build communities that way it encourages people to be more active.”

As part of the Clinton Health Matters Conference this year, Chelsea Clinton led a “day of action” in Coachella where dozens of volunteers rehabbed two homes to make them healthier places to live. Homeowner Maria Celaya, who is in her 80’s, was thrilled when workers patched up her roof and gave her new energy efficient appliances, doors and windows. She said, “Everything needed to be done. The whole house was a mess, it was really destroyed. I am really grateful to God and very happy. I’m very, very happy. “