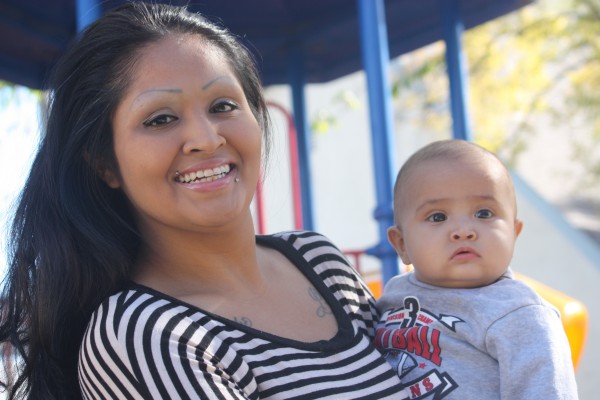 Several dozen women who would otherwise be in jail or prison instead receive addiction treatment and counseling at Prototypes, a substance abuse treatment center about 30 miles east of downtown Los Angeles. Their young children are allowed to live there too.

Judge Michael Tynan, a former public defender in his seventies, presides over the court. Rather sending offenders to prison, he metes out punishments that range from essay writing to jail time for rule breakers while offering hugs to those to advance through each of the program’s four stages.

Thirty-four year old Lillian Medina arrived at the reentry court in downtown Los Angeles for the first time nearly a year ago. She was pregnant, in handcuffs, and facing drug trafficking charges.

Medina started selling drugs at 19, and had been in and out of lock-ups and drug programs—all unsuccessful—ever since. She had six other children.

“I lost them all to the system,” she said, adding that she doesn’t know where they are.

Medina said that when police burst into her room just before her court appearance, she probably could have avoided arrest by giving her sister’s name and birthdate.

She’d been evading warrants for three years that way. But she decided to come clean.

“I was tired,” she said. “I was three months pregnant and just tired of running.”

Medina said she wanted to avoid giving birth in jail or prison because if she did, her newborn would go directly into foster care.

The court, where defendants with long rap sheets sometimes get fifth or sixth chances, seemed like her only opportunity to get help. If she were accepted into the program, she’d be able to raise her baby while she received treatment at Prototypes.

“He was upset that I had six kids, and that I’d been to other programs…I said, oh, please,” she recalled.

Tynan gave Medina the nod, allowing her to move from county jail to Prototypes, which is housed in a former church school.

First, Medina had to plead guilty to the charges against her, meaning that if she fails in the program, she’ll go straight to prison.

Quarters are cramped with four women and their children to a single classroom turned dormitory. Twin beds for each of the women stand next to cribs or children’s beds while a single small dresser holds each family’s clothing and supplies. Small windows above eye level look out onto a children’s playground. There is no privacy.

Funding is tight, and Medina must pay $266 a month for her bed, leaving her just $60 from her son’s welfare check for such necessities as diapers and wipes that the program doesn’t provide.

Rules are strict, supervision is constant, and deviations from the regulations are punished.

Still, Medina said the program is working for her, as no other program ever has. She is raising a healthy seven-month old boy, and beginning to look for work.

Prototypes Executive Director Cassandra Loch said Women’s Reentry Court was established in 2006 to solve the problems that have caused women like Medina to repeatedly return to prison or jail, and their families to shatter.

“We recognized that the root cause was mental illness and substance abuse,” Loch said.

The program also addresses past trauma—usually physical and sexual abuse in childhood and abusive adult relationships—with classes that teach the women how to cope with the resulting Post-Traumatic Stress Disorder without turning to drugs.

When the program began, the state prison system provided much of its financial support because many of its participants were on parole. But, since legislation to reduce prison overcrowding made California’s non-violent offenders the counties’ responsibility, state funding has dwindled and the program’s future is uncertain.

The 2011 law, AB 109, addressed prison overcrowding by sending state prisoners who had committed non-violent, non-serious, non-sex-related offenses to county lock-ups or probation. While some counties have used the funding to support rehabilitative programs and direct non-violent offenders to drug treatment and other services, others have managed non-violent offenders by sentencing them to jail time.

Now Loch and others are lobbying county officials, including the Sheriff’s Department, which operates a jail system that is bursting at the seams, to invest some of the millions of dollars it receives under AB 109 in diversion programs, like the reentry court.

A 2011 study noted that recidivism rates were lower for reentry court participants than for women who had been to state prison. In a small sample of women, 33 percent of the former prisoners were re-incarcerated after two years, while only 24 percent of the reentry court women went back to prison after attending the program.

The treatment program deserves credit, Tynan said. But so does the court component. “They [participants] get an idea that someone is power is interested in their case, and they respond,” he noted.

On a recent Friday morning, Lillian Medina was back in court, one of about two dozen women who were ready for one of Tynan’s embraces or bracing for a stiff kick.

Medina was neatly dressed, flawlessly made-up, and appearing confident as she walked to the counsel table, took a seat next to her attorney, and waited for the judge to speak.

“Things are looking up since I saw you last,” Tynan told Medina. “ It looks like they want to keep you around. I’m glad you decided to stick it out and work your program.”

Two weeks before, Tynan had tossed Medina in jail for five days. The judge refused to discuss individual cases, but Medina said that she’d been caught writing to someone in prison, a rule violation. She scrambled to find someone to care for her son while she was locked up —or he might have ended up in foster care.

“It was an ugly experience for me.”

Still Medina said of Tynan, “He has a really big heart. He’s for the women. He’s for second chances.”

Medina vows to use her second chance to raise her son, get a job, and never return to jail or prison again.

Meanwhile, county officials are currently mulling how much weight to give second chances for future inmates as they consider spending millions of dollars on programs to ease jail crowding, including new the development of new jail facilities for both men and women and community and mental health programs.